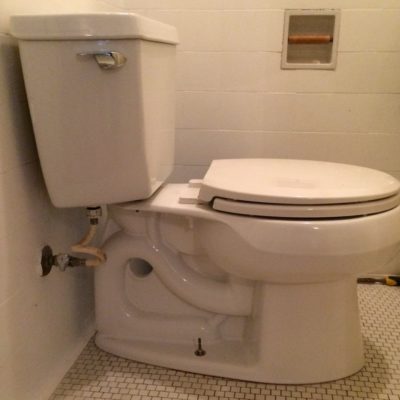 The toilet, the porcelain throne, it is one of those features of our home that is often taken for granted. . .until there is a problem. This is the point in time that everyone in the house is suddenly greatly concerned with the status of the toilet, the diagnosis, and the timeline that it will be returned to its former noble glory. There are as many possible solutions as there are potential problems. Whether it is an action figure who was sent down on a covert mission or a ball of toilet paper nearing the size of a softball, sometimes you simply have to pull the toilet to address the issue. Recently I had just such an “opportunity” and found two very different issues – one was a ball of toilet paper that was hung up on the exit rim of the toilet (an easy fix) and the second was a broken flange where the bolts that secure the toilet to the floor lock in. If you’re dealing with a similar toilet repair, or you just want to be prepared if it happens to you in the future, read on to learn about how to fix a toilet flange using a simple but clever product called Hydroseat. END_OF_DOCUMENT_TOKEN_TO_BE_REPLACED