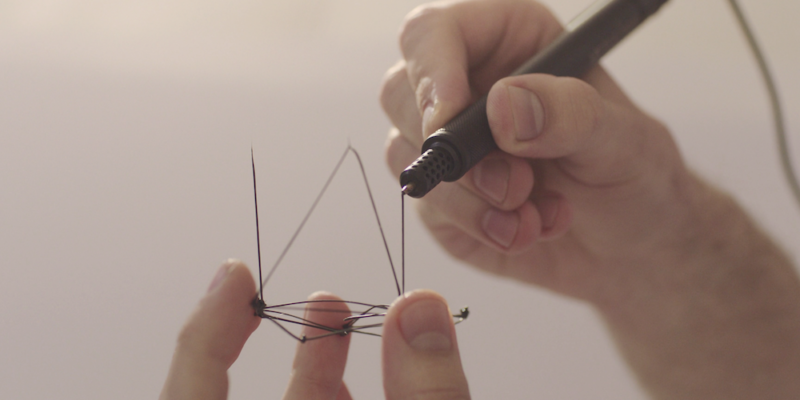 3D printing is evolving and advancing like crazy. 3D Printing is known as additive manufacturing (AM) which are processes that create 3 dimensional objects through sequential-layer material addition. The technology has evolved to the point of being affordable to the general public and it’s seeing some new innovations like 3D Pens, thanks in part to thermoplastics that work effectively for consumer use. With the invention of 3D pens, It is now possible to create 3 dimensional figures freestyle! Join us, as we cover a few of the more popular 3D Pens, provide some purchasing guidance, and discuss why you might want one of these technological wonders.

A popular option that sports some high-end features with some reasonable pricing, the AIO Robotics 3D Printing Pen is an option worth considering. This 3D Pen utilizes 1.75mm PLA filament only (many pens can use both PLA and ABS). The pen features a sleek design and is powered via a ubiquitous usb cable.

With over 100 reviews and a 4+ star rating on Amazon, it’s also on sale at the time of this article for a very reasonable $50:

The Aerb 3D Pen utilizes 1.75mm ABS or PLA filament and operates via a power cord (standard 120v plug). Two buttons on one side of the pen control the filament feed and direction. Two buttons on the other side increase or decrease the feed rate. The display lets you know when the pen tip is the right temperature for whatever filament option you’re using.

The Aerb 3D Pen enjoys a 4+ star rating on Amazon and is reasonably priced at around $50:

Although the 3Doodler is very popular with 400+ Amazon reviews, it’s worth noting that almost 25% of the reviews were 1-3 stars. Most buyers seem to have a good experience with it, but there are a enough negative reviews to give us some pause. The same brand also has other versions of 3D Pens more geared toward kids (3Doodler Start) or pro’s.

The 3Doodler Create 3D Pen sells for around $67:

Lix got its start with what appeared to be a wildly-successful kickstarter campaign and an ultra-sexy product. While the Lix 3d Pen looks fantastic, is very sleek, plugs in via a standard usb cable – not all the feedback is positive.

If you peruse the comments section of the Lix Kickstarter page, you’ll find a lot of very disappointed backers and quite a few references to the pen failing. While we don’t normally like to give mention to a products that don’t appear to be well regarded, this pen looks like such a great design we wanted to make sure anyone considering it is aware of its history and less than five star reviews. Buyer beware on this one.

The Scribble Duo is the only one on our list that has dual nozzles, allowing you to draw with two colors at once, or to build up your design with less back and forth. If you prefer a single nozzle, Scribbler also makes the Nano 3D Pen, which features a slimmer design.

You can find the Dual Nozzle Scribbler Duo 3D Pen for around $65:

Ok, so we’ve tempted you with a look at a few of the pens, now why would you want one, and what else should you know about the technology? Let’s dig into 3D Pen technology and its uses.

What About the 3D Pen Ink or Filament Plastic?

The two types of plastic most popularly used for 3D printing are ABS (acrylonitrile butadiene styrene) and PLA (polylactic acid). Some of the differences between the two compounds include: PLA is biodegradable, made from renewable resources whilst ABS is an oil based thermoplastic; ABS is a bit stronger and more flexible than the reportedly easier to use PLA. While not free, the refill filament plastic is pretty reasonable, particularly if you buy it in bulk.

One of the most obvious practical applications for the 3D pen is for the purpose of creating art. There is great appeal to the idea of drawing in the air, literally, and having your creation take form in 3 dimensional space. If you can imagine it, you can create it, however it does take practice to master the idiosyncrasies of this new art tool. One article I read said it’s just like drawing with an ink pen, but others say not so.

It seems like drawing with a 3D pen would a cross between drawing with ink and a glue gun, which would definitely entail a learning curve for the nuances of this new art form. Also, each 3D pen design is a little different and therefore has a different feel. For example the Lix is lightweight and easy to use due to its small, sleek design whereas the Lay3r 3D Printing Pen is larger (due to its built-in fan), but lightweight. I definitely recommend trying different designs (i.e. holding them in your hand) whenever possible to get a sense of what feels right to you before taking the plunge.

Apparently creating 3 dimensional objects is also a great educational tool that helps to develop a child’s spatial reasoning, an important skill for professions such as architecture, engineering, design, fashion design, styling, piloting, sailing, and even athletics. The educational implications are far-reaching and at least one company, 3Doodler, has designated an entire line of product bundles for schools and teachers as well as resources on their website specifically for educators. However, it’s worth noting these 3D Pens all feature tips that get hot enough to melt plastic. For that reason, they’re not recommended for very young kids, and adult supervision and good judgment is advised for any youngsters experimenting with 3D Pens.

Designers use this technology to create models of such things as buildings, jewelry and prototypes that will eventually be mass-produced. One creative couple designed their wedding bands using a 3D pen. They wanted to create something unique and thus were able to experiment with many designs using the 3Doodler until they landed on the designs that really spoke to them, then found a jeweler to recreate the design in a precious metal.

I found my favorite 3D pen design on 3Doodler Pen website’s project page. The company offers free design templates for projects with instructions. If anything has convinced me to branch out in my creative endeavors to include a 3D pen, it is these Tiffany Candle Holders using 3Doodle template.

Is the timing right to buy a 3D Pen? As with any cutting-edge technology, there appear to be some growing pains with virtually all the 3D Pens currently on the market. We would expect the technology to continue to evolve and improve. Unlike when 3D printers came on the market, the barriers to diving into 3D Pens are very low. Less that $100 gets you a well regarded pen and plenty of filament to get you going. If you’re intrigued, we say go for it! And, if we missed your favorite 3D Pen, or you have feedback on any of the models above, please share them in the comments below.