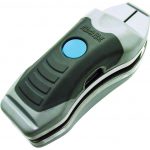 Ok, I admit it – the first thing that got my attention about the Bladerunner Drywall Cutting Tool was its super cool name. What can I say? Anything that has anything to do with Harrison Ford will turn my head (I even went and saw Indian Jones and the Kingdom of the Crystal Skull – in the theater). This allegiance to Harrison has sometimes led to disappointments (see last sentence about latest Indiana Jones installment) but luckily for me, the Blade Runner by Goldblatt Tools turns out to be pretty darn impressive.

Basically, the Blade Runner is a hand-held guide with built-in blades that lets you zip through drywall in record time and with far less potential for slicing yourself via utility knife mishappery. While it may look like one piece, the Blade Runner is actually two pieces (a top and a bottom) that are held together via a very strong magnet. The pieces can be pulled apart and snapped back together with a piece of drywall in between, allowing you to make specific cuts in the center of a sheet. The blades are replaceable, and each is said to be good for 3700 linear feet. The Blade Runner also utilizes a design that lets you pivot and turn as you cut – which is quite ideal for making 90 degree cuts, circles, curves or custom shapes. You’ll be cutting down drywall like they were dud replicants. You don’t have to just take my word for it – the Blade Runner was recently picked as one of Popular Mechanic’s Editor’s Choices for the 2009 National Hardware Show. Goldblatt Tools has a few videos available on their site that demo all that Blade Runner can do – we suggest checking them out if you’re interested.

is available for around $70 online.