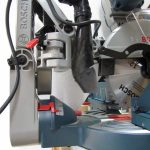 Back in June of 2010, we brought you a sneak peak of the Bosch GCM12SD 12 Inch Axial Glide Miter Saw. That was shortly after the saw was unveiled to a group of media folks attending the Bosch Global Leadership Tour, where a Bosch rep literally beat the axial glide mechanism with a 2×4. For months we coveted the memory of what we saw at the Bosch event, until one fine November day a new axial glide miter saw showed up at HomeFixated courtesy of Bosch.

We had used the new axial glide saw at the Bosch event briefly, but we were anxious for some alone time with it here. After two months of holding court as the centerpiece of the shop, we’re happy to share our thoughts. Back about six years ago BHF (Before Home Fixated), I bought a Bosch 10″ Miter Saw and saw stand. That saw served me very well since then. 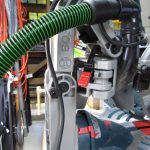 As great as that saw is, I was always frustrated by how much space it took up. As a DIYer, I don’t have the luxury of a cavernous warehouse-sized shop. Every square inch counts. Let’s face it, the dual rails that miter saws slide on are about as unobtrusive as the Eiffel Tower, laid sideways. As a result, my 10″ miter saw could usually be found on the floor somewhere, set at maximum miter angle to try and minimize how awkwardly the rails jutted out.

The new Bosch 12 Inch Axial Glide Miter Saw makes awkward, jutting rails a thing of the past. That space savings, and the resulting smoothness the new glide mechanism affords, are the greatest selling points of this saw. Since I’m known for my impatience at putting tools to use asap, I can happily report the axial glide comes almost completely assembled. Just the bevel lock lever and the miter lock knob need to be installed. Bosch even included a 10mm socket for the bevel lever, but if you’re considering buying this saw, I’m going to guess you have a socket set standing by anyway. Once installed, I found the Bevel Lock lever to be very, very stiff. A quick check of the manual revealed I needed to adjust a nut accessible from the back of the saw. A simple 1/8 turn with a 17mm socket resolved the stiffness fully. See, I needed that socket set after all!

Carrying my 10″ miter saw was a task I never particularly enjoyed, and I think the same could be said of the 12″ axial glide. It’s heavy (about speed limit weight in pounds), and has a pretty good amount of mass up high thanks to the motor location. If you’re looking for a saw you can casually toss in and out of your truck like an empty beer can, this probably isn’t it.

Unlike the previous Bosch 10″ miter saw, there is no top carry handle (in fact Bosch makes it clear you should not attempt to carry it from the main saw handle). Instead, there are two hand grips on the left and right of the saw base that enable you to carry the saw from the back side. Despite the additional size of the 12″ saw, I actually found it a bit less awkward to carry than the 10″ (the 10″ would always bang up my legs when carrying it from the integrated carrying handle. As a frame of reference, I’m about 150 pounds (of pure, manly, sinewy muscle of course) and I could carry the saw around without a helper. I wouldn’t want to carry it all day, but it’s not so big as to be immobile. I would guess most of you will find a home for the saw and rarely move it anyway. Onward.

The good news is whatever home you find for it will require much less space than before. If you’re doing straight cuts, the saw can be right up against the wall. If you’re doing miter and or bevel cuts, you’ll need a couple inches of space behind the saw, but well short of what you would have needed with dual rails. 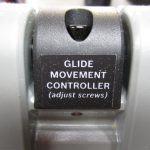 Bosch thoughtfully clipped the power cord to the axial glide mechanism so you don’t have a power cord floating around and potentially getting cut or pinched in the axial goodness. And if the Glide is too glidey for you, you can ratchet up or down the super-smooth resistance with a simple twist.

Before getting rolling with Axial Glide-induced bliss, I followed Bosch’s instructions for miter calibration. Bosch suggests using a combination square for this which I found slightly problematic since the square would hit the teeth of the blade, throwing things off slightly. Instead, I used the Fastcap Micro Square which worked great. My findings: the saw was calibrated right on the money straight out of the box.

Another adjustment I made was to the kerf inserts. Something I apparently never bothered to do with my old 10″ saw, but it seems like a novel way to reduce tear-out on certain cuts. The manual says you use a Phillips driver for this, but the fasteners were in fact allen bolts (Bosch, of course, included an onboard allen wrench). The inserts are beveled at the edges, but the manual does warn they can get cut into at extreme angles (I didn’t run into that problem). I actually adjusted the inserts all the way in and still found a solid gap on both sides. If you’re looking for zero clearance, the stock inserts won’t get you there completely. However, tear-out isn’t something I had much of an issue with on either saw, Bosch cuts smooth!

A Few Features We Noted:

A few words on capacities. For any cuts up to 5 1/2 inches, you can underutilize the saw by leaving the axial glide mechanism locked in place.

For anything 5 1/2 to 13 3/8 inches, you’ll want to flip the simple lever to unleash the silky goodness of the axial glide. The maximum height for base molding against the fence is listed at 6 1/2 inches, however some users have found a more practical limitation at 4 1/2 inches. We didn’t play around with baseboard that tall, but you can find an in-depth (rant?) about this topic via this Amazon review. It’s an issue for some folks we saw referenced a couple times. As a previous 10″ saw user, the 12″ axial glide seems capacious to us.

Overall, we loved the Bosch GCM12SD 12 Inch Axial Glide Miter Saw. Looking at sliding rail designs now seems retro and downright antiquated. I also have yet to injure myself bumping into it when running around the shop, not something I can say for my old saw and its various protrusions (may it rest in peace). Is it perfection manifest in miter saw? Not quite. We did find a few minor things to nitpick that we weren’t completely enamored with.

, a laser is not included with the Bosch GCM12SD 12 Inch Axial Glide Miter Saw. I found this omission to be a bit of a disappointment on a higher-end saw like this. With Bosch’s growing presence in construction lasers, I’m not quite sure what made Bosch decide to leave a laser off the axial glide. I like lasers, they’re shiny and useful. 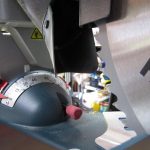 Dust collection was decent but not fantastic. I’m no German engineer (although I am half German, which has to count for something?), but it seems as though the included dust capture hood could have been designed to catch more of the dust. To my naked eye, it seemed like some dust shot upwards (outside the bounds of the dust collection port). I’m sure Bosch has to walk a fine line between thorough dust collection, and dust collection that gets in the way, but I think there’s room for improvement.

From an operational perspective I had three minor concerns: 1) The safety trigger found on both sides of the saw handle seemed stiff to me. Maybe I haven’t been doing enough thumb-curls at the gym, but I found the safety a bit awkward. That might be by design, but I’d rather have a less obtrusive safety mechanism. 2) The saw kicks a bit on startup. This reminded me a bit of some worm drive circular saws. There’s so much power that when the motor first kicks in you sometimes get a little bit of a jump in the saw arm. Not a huge concern, but it’s something to be aware of. 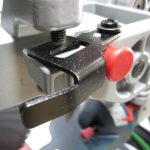 3) The depth stop screw rubs on the depth stop plate on our saw. This was easily remedied by unscrewing the depth stop so it clears the plate entirely. I don’t typically use a depth stop on a miter saw, but if you do, be aware you’re probably not going to get entirely precise results. I found there was a bit of play up and down when the depth stop was in place. Bosch basically says “use a table saw” in the manual anyway. If you have to do partial depth cuts on the miter saw, your mileage may vary. 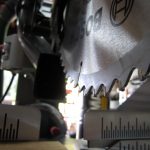 Those minor issues aside, you can expect the Bosch GCM12SD 12 Inch Axial Glide Miter Saw to serve most miter saw needs exceedingly well. Everything from the base extension slides to the ground-breaking axial glide mechanism are ridiculously smooth. This is a well engineered, solid and innovative saw. We’re hoping Bosch comes out with an even more compact and transportable 10″ axial glide version eventually, although there’s nothing public on that currently. Priced at around $800 from Amazon, the Bosch GCM12SD 120-Volt 12-Inch DB Glide Miter Saw

is not a cheap saw, but it also falls far south the of the $1300 price tag for the Festool Kapex KS 120 Sliding Compound Miter Saw