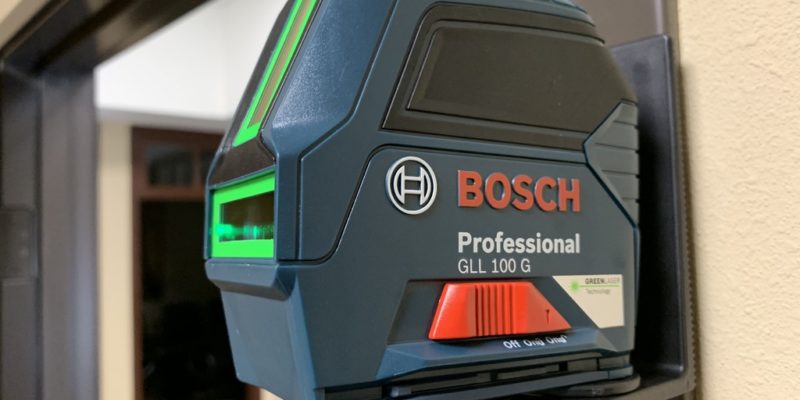 This post is sponsored by The Home Depot. Going green has gotten a lot more attention in recent years. The shift to green has also been happening with lasers used in construction and home improvement, but in their case, it has nothing to do with the environment. In the case of lasers, it’s about going from red to green beam technology. Is this just a fad like shag carpeting, water beds and wood paneling? Or, is greening your laser beam something you should consider pronto? We’ll cover all of this (except the shag carpeting and water beds) and more as we review the Bosch GLL 100 GX Green Beam Self-Leveling Cross-Line Laser.

The Bosch GLL 100 GX Cross-Line Laser runs on 3 AA batteries. Since green lasers are known for sipping juice faster than their red counterparts, what batteries you use is a consideration. Although Bosch thoughtfully includes 3 AA batteries, I don’t trust them long term and neither should you. Bosch recommends storing the laser with the batteries out of the tool, and we wholeheartedly concur. I had another laser destroyed after I foolishly left it stored with batteries in it. Leaking acid devoured the battery compartment beyond repair. For this reason, I have switched to higher quality batteries (Energizer Ultimate Lithium, which are marketed as “leak proof”). I am also a lot more careful about taking batteries out of tools when they’re not in use.

Now that we’ve covered that public service announcement, let’s get back to the Bosch GLL 100 green laser. When your batteries get low, the battery indicator light on the Bosch GLL 100 GX will flash green (it’s solid green when your charge level is still good). When low, the laser itself will also flash off for about five seconds every 10 minutes. According to Bosch, you have about an hour of operation left once all this flashy stuff starts happening. Keep those spares handy!

We tend to think of red as the gold standard of visibility. Hey, stop signs are red for a reason, right? In reality, green is more readily visible to the human eye. If you’re a cyborg, we don’t know what to tell you – you probably prefer infrared. According to some very non-scientific research I did online, the most visible wavelength to our (human) eyes during the day is 555 nanometers. That equates to somewhere between green and yellow. For night vision, it’s around 505 nanometers, which is between green and blue-green. According the the spec’s on this Bosch green laser, it puts out laser light in the 500-540 nanometer range. The recurring theme you might have picked up here is “green.” And now you also know why tennis balls aren’t red. Now that we’ve covered the sciency stuff, let’s take a peek at what green vs red lasers actually looks like in the real world. In the image above you’ll see a major difference, especially in the upper portion of the vertical line.

Indoors, the green light is still highly visible at 30+ feet, which is far more than can be said for red lasers we’ve used rated for that same 30′ distance. If you’re using the Bosch GLL 100 GX indoors in a residential environment, it’s hard to imagine the laser being under-powered for your needs. If you’re using the tool in a single room, you’ll find the green laser to be extremely visible. You will have no trouble picking it out, even on a distant wall. And, if you stick it in a corner, it should cover all the walls decently for you (assuming you have a horizontal line running).

Outdoors, visibility is excellent at less than 10′, but beyond that it trails off rapidly. The color of the surface you’re aiming at, and most importantly, how bright it is outside have a major impact on how useful this tool will be outside. In low light, it could be used in certain outdoor tasks in a pinch.

Bosch rates the tool as plus or minus 1/8″ accuracy. Since lasers get less precise the further they project and their beams get wider, Bosch recommends always making any markings based off the middle of the laser line. I also found the actual beam thickness to be noticeably thicker when compared to a less powerful Bosch red laser.

For the benefit of Home Fixated readers I subjected myself to a trying task virtually none of you will undertake: reading the user’s manual. One fascinating tidbit I learned on that adventure is that ambient temperature has the greatest impact on accuracy, with temperature differences from the ground moving upward potentially diverting the laser beam. Who knew?!

The main power switch is either off (which locks the pendulum mechanism to help prevent damage during transport), on-but-locked (which turns on the laser in a fixed position), and on-with-auto-leveling (which provides you with level or plumb or level and plumb lasers). The secondary on-but-locked position is handy for projects requiring a reference line that isn’t level. Examples of this would be a hand-railing on a slope, or wainscoting on a stairway.

With either of the “on” settings, you have the option of a horizontal line, a vertical line, or both. These are clearly designated with buttons on the back of the Bosch GLL 100 GX with two buttons, each cleverly marked with a horizontal or vertical line.

Where to Stick It – Brackets, Mounts and More

At it’s most basic level, you can plop the Bosch GLL 100 GX Cross-Line laser onto any flat, stable surface. It has three rubberized bumpers on the bottom of the tool that provide a stable base. If you’re fancy and have your own tripod, the tool has both 1/4″ and beefier 5/8″ tripod mounts found on construction tripods. Bosch also includes an L-bracket with multiple mount options, as well as a ceiling grid clip for those of you installing drop ceilings.

The L-bracket has a keyhole for mounting to screws or nails on studs or drywall. It also has two adorable feet that fold out to create a mini-tripod of sorts. While that provides a little more stability, most users will simply set the laser down without the L-bracket. If you’re around steel studs or steel door frames, the magnets on the back of the L-bracket provide a very convenient way to mount the Bosch GLL 100 at your chosen height.

Some of the Bosch lasers we have used in the past have a more versatile clip mechanism, allowing users to clamp the tool to poles, wood door trim, etc. Contractors working on drop ceilings will no doubt prefer the clip included with the GLL 100, however we would have liked to see a clamp option with a bit more versatility than just drop ceilings. However, the L-bracket will cover many usage scenarios. If you will be using the tool regularly, then I would recommend you keep a tripod handy. A tripod lets you position the laser exactly where you want it, with minimal fuss.

The Case of the Small Case

Bosch thoughtfully includes a canvas case in signature Bosch blue with a velcro closure flap. However, if you’re hoping the included batteries, L-Bracket and optional laser target will all snuggle up together in the case, you’ll be disappointed. The case is really designed to fit only the laser itself. If you’re bringing the other gear, it will need to hitch a ride elsewhere.

Is It Worth the Greenbacks to Green Your Laser Beam? 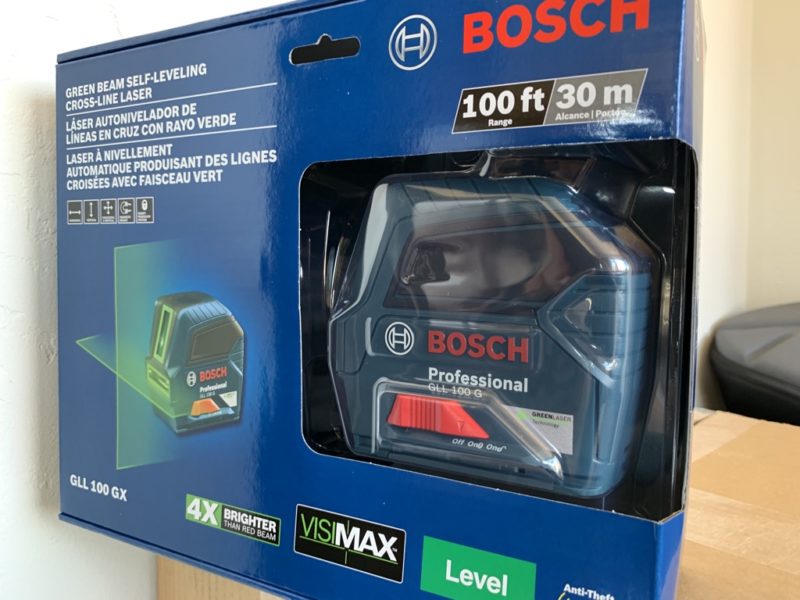 If you already have a red beam laser that’s serving your needs, but all means carry on! However, if you have found yourself straining to spot your laser, or you are considering your first laser purchase, we think the Bosch GLL 100 GX Green Cross-Line Laser is worth a close look. Right now, Home Depot is running a special on the Bosch GLL 100 GX bundled with a Bosch GLM165 Laser Measure for around $338. At this price point, it may be overkill for many homeowners. For anyone needing a highly visible green cross-line laser for carpentry, tile-setting, and general remodeling and construction tasks – it’s a clear winner!