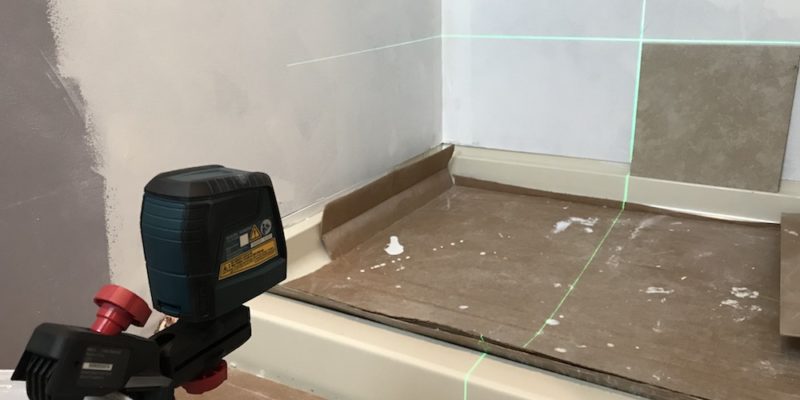 This post is sponsored by The Home Depot. A couple of months back, we took a look at Bosch’s fancy-schmancy GLL3-300 laser level. With the ability to shoot one horizontal and two vertical lines simultaneously, and a range of 200’, the Bosch GLL3-300 is aimed at pros doing big jobs. If your jobs aren’t quite so demanding, but you still have the noble goal of having everything level and plumb, the bright green light of the Bosch GLL40-20G Cross Line Self-Leveling Laser might be just the ticket to get squared away – and for a lot less green.

Roughly the size of a tape measure, the Bosch GLL40-20G Cross Line Laser shoots bright green intersecting horizontal and vertical lines at distances up to 40’. Bosch uses their proprietary VisiMax technology to monitor the laser’s temperature and power consumption, and deliver the brightest line for the job at hand. Using the same self-leveling technology as the GLL3-300, just get the Bosch GLL40-20G within ±4° of plumb and level, and the laser will finish up the task. The laser comes with a soft storage pouch, and a handy little mount that can clamp onto a variety of surfaces. Here’s the full feature and spec list:

Getting The Bosch GLL40-20G Ready To Cross The Line

Inside the blue box is everything you need to start making lines with the Bosch GLL40-20G. The laser operates on two AA batteries, which are actually included. What a concept! Just pull up the little tab on the back of the laser, pull off the cover, insert the batteries, and click the cover back into place. It latches very securely.

Operating the Bosch GLL40-20G Cross Line laser is about as straightforward as it gets. Slide the power switch to the ON position, and it turns on. All done? The OFF position powers the laser down, and also engages the pendulum lock, which protects the self-leveling mechanism. The kit includes a soft pouch where you can stow the laser; unfortunately, there’s no room for the included mounting device.

To position the Bosch GLL40-20G, you have several options. It can be set on a table, workbench, or any other relatively level surface. If that doesn’t happen to be quite the height you need, don’t fret. The bottom of the laser is threaded with a ¼-20 female thread, so it can be used with any standard tripod.

Don’t have a tripod, or have a job that requires getting into a tight or weirdly-shaped spot? If there’s a nearby surface that measures between ½” – 2-3/8”, it’s the included MM 2 mounting device to the rescue. Its rubber-padded jaws can clamp onto a horizontal or vertical 2×4, a pipe, a table edge, the rim of a bucket…or whatever’s handy. The MM 2 threads into the mounting hole under the Bosch GLL40-20G, and the bracket can be contorted until the beams are level and plumb.

Green Lines On The Bosch GLL40-20G – A Bright Idea

Green laser levels, like the Bosch GLL40-20G, are touted as being brighter than red lasers. I’ve used several lasers that project red lines, but never a green-beamer, so I was curious to compare the two.

I took the Bosch GLL40-20G and Bosch GLL3-300 lasers out to my shop, set them up, and aimed them at the opposite corner, about 35’ away. Both lasers were clearly visible, but the green beam on the Bosch GLL40-20G was definitely easier to spot, even though it was close to the limit of its 40-foot range.

The Bosch GLL40-20G was put to work on a couple of jobs in our current project house almost immediately after it showed up. Its first mission was to help determine how badly out of level the living room floor was in the roughly 150-year-old house. The answer? VERY badly. These are the types of projects where I hesitate to even let a level near the place.

Next, it was time to hit the shower. Or at least shoot some lines into it. We were tiling a 42”-square shower, and the trickiest part is maintaining a nice, straight plumb line. You can draw one on the wall, but then you have to be careful not to cover it with mastic, which can be time consuming. With the GLL40-20G, I set the bottom row of tile, and then just projected a plumb line to set the remaining rows. It sped up the job, and we ended up with a perfectly level and plumb tile job.

A laser level is the perfect tool for jobs like those we used it on. It’s faster and easier than trying to establish two level points and snapping a line, and likely to be more accurate. Other chores where the GLL40-20G would shine include establishing a line for chair rail or crown mold installation, or establishing a plumb line to lay out the position of your top and bottom wall plates when adding a perpendicular wall to an existing wall. It would also be the ideal way to establish a perfectly level line for installing kitchen base or upper cabinets.

In my shop testing, the Bosch GLL40-20G projected a good, wide visible line all the way across the room. The only issue I found with the laser is that when you’re using it over shorter distances, the horizontal line fades a fair bit once you get several feet away from the intersecting lines. The vertical line is fine. My solution is to keep the laser back as far as possible.

The Bosch GLL40-20G is aimed at a different market than the much-pricier GLL3-300. While it doesn’t have all the capabilities of the higher-end laser, its ability to display good, bright intersecting lines would make it a useful tool for any handyman, serious DIYer or handy homeowner to have. Its compact size makes it easy to stow and schlep around, and its self-leveling capability is easy and intuitive to use.

Run time on the twin-AA power supply of the Bosch GLL40-20G is very good. Between all the testing I did, and keeping the laser powered up during the entire shower tile job, the laser was probably on for a total of over five hours, all on the original batteries. When the batteries are getting ready to go to that great battery dump in the sky, the beams flash off and on quickly three times. The laser repeats this pattern once a minute until the batteries are dead. If you’re averse to tossing used batteries, the laser will work just as well with rechargeable AA batteries. That way, you can be as green as your laser.

If you’re keen on keeping your projects plumb and level, beam yourself up a Bosch GLL40-20G Self-Leveling Cross-Line Laser. The tool comes with a one-year warranty, which Bosch will double if you register it within eight weeks of purchase. The Home Depot’s 90-day return policy lets you go green risk-free. And that’s on the level.