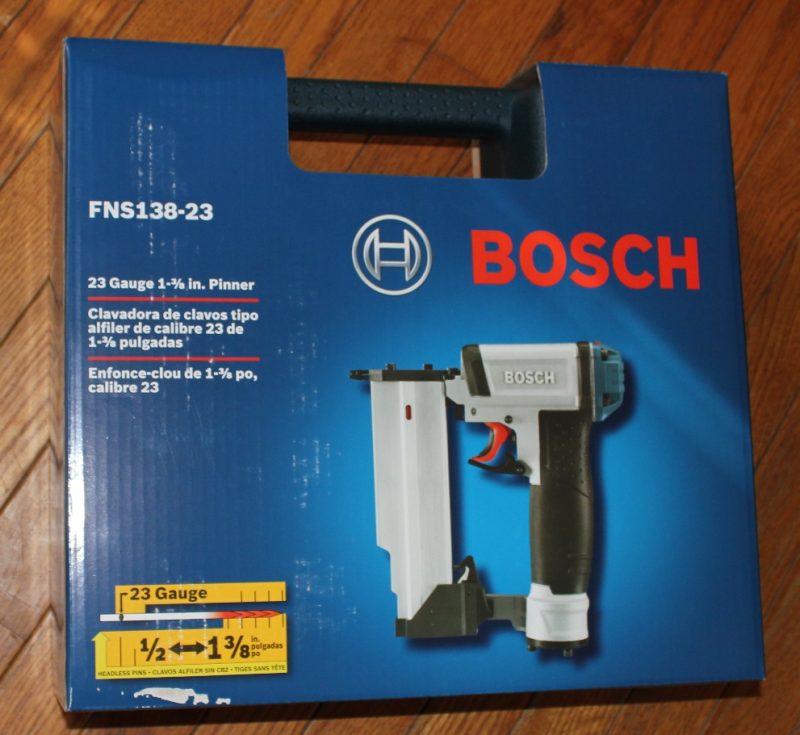 Every so often, I get an uncontrollable urge to empty a box of matchsticks and attach them to something. Aside from being an indication that my meds may require further adjustment, the latest episode seemed a perfect opportunity to check out the latest (and smallest) entrant to Bosch’s lineup of air nailers, the recently-released FNS138-23, which had just arrived in the Home Fixated executive suite.

It’s common knowledge that the preferred method of matchstick impalement is via a 23-guage pin nailer, aka a “pinner.” The classic, if somewhat violent and scary, example of stick nailing was provided a short while back by our fearless leader, Marc, when he reviewed three other pinners.  Although it’s unlikely I’ll be able to duplicate the level of terror and devastation brought about by Marc and his little friends, I put the Bosch through its paces to see if it might be worthy of being YOUR little friend.

The tool comes securely nestled in a lockable plastic tool case, with the Bosch logo on the front. The case is sturdy and well-designed, with form-fit areas for the pinner, two allen wrenches and two no-mar tips, all of which are provided. Another compartment has plenty of space for some boxes of various lengths of nails, and the enclosed safety glasses fit in another area, with space for another pair, or several boxes of safety matches.

The nailer is a nice-looking tool, a mixture of grey and Bosch blue. The housing is all metal, and the tool has a good heft to it, and feels very solid. The black rubber overmold on the handle makes it comfortable to hold. Getting ready to do some pinning is easy: press the magazine release, slide the side back, drop in some ammo, and lock and load. The tool comes with a standard ¼” air hose connector already attached; squirt a couple of drops of air tool oil into it, connect the air hose, and prepare to pin.

Don’t Get Blown Away

Something you’ll want to remember to do is to dial back the air pressure going to the nailer; my compressor was set up to run a framing nailer, and would provide up to around 135 psi. That would be WAY too much pressure for this little nailer, and could damage it, aside from launching the little pin quite a bit further than you might have intended. The gun is designed to operate in the 60—100 psi range. For my matchstick test, I had it dialed up to 90, which launched the short ½” pins completely through the matchstick and buried them in the plywood. Some experimentation is clearly necessary, and I’d start out toward the left side of the scale, using scrap pieces of the materials you’ll be securing. I dialed it back to about 75 psi, dropped in some 1” nails, and the game was on.

Using my incredible artistic skills, I spent several hours designing my interpretation of what the Home Fixated logo should look like; the results speak for themselves. I kept the rubber no-mar tip on the nose of the pinner, as the slight groove in the tip helped hold the matches in place as I impaled them. It’s pretty easy to see exactly where the fasteners will go, and the tip is very easy to remove and replace according to your whim.

The matches are now firmly attached to a sheet of plywood, and I have no doubt that I’ll be bombarded soon with requests to design logos for other up-and-coming businesses. The point of the nailing, of course, is to demonstrate the precision these guns are capable of, and that they can attach even something that tiny without splitting the wood. The gun performed flawlessly, and no matches were split or destroyed in the course of this review.

The Secret to Making the Pins Fly

If you’re used to using a nail gun for framing or trim work, you’re probably used to having to depress the tip of the nailer onto the workpiece before the gun will fire. This trips an actuator, which is a safety feature to prevent accidentally squeezing off a round (or several) inadvertently. The smaller scale of the pinners makes this type of feature impractical, so the solution employed by Bosch (and most other pinner makers) is to use a secondary safety trigger, which must be depressed before the primary trigger is pulled. It sounds cumbersome, and does take a little getting used to, but is actually easy to use and works well. When you’re getting your firing grip, simply flip up the secondary trigger; it will lie flat against the handle, and your middle finger will hold it in place, which is probably a far more noble task than that finger is normally employed for. Now, every time your index finger pulls the Red Trigger of Death, a mighty pin will be expelled from the tip, so be careful where you point that thing.

Another difference between the pinner and its bigger brothers is the exhaust. Every time you pull the trigger, the air used to propel the nail is then expelled, usually at the rear of the gun. Framing nailers, and even finish nailers, can put out a burst strong enough to blow your hat off (ask me how I know). The little pinner emits about as much wind as a sparrow fart, and it’s dampened even further by going through an internal muffler that looks like a fiberglass air filter.

The magazine cover has a low-nail indicator on the side. It’s easy to see, and when the nails get low a red bar is visible. When the nailer runs dry, the lockout feature (which I tested, and which works) prevents the firing trigger from being depressed, which is a great feature, since the pins are so tiny it’s often hard to tell whether you’ve shot one or not. If the nailer jams, which mine never did, the nosepiece is easily removed by slightly loosening the two allen bolts and sliding the plate off.

Once I got my match fix, I gave the pinner another test by attaching some door stop material around the inside of a bedroom door frame. The trim material is about 3/8” thick, and I used 1 3/8” pins to attach the trim to pine 1X6”. The trim attached quickly and very firmly; I couldn’t pry it off with my fingers after attaching it, and several mighty slams of the door had no effect, other than to provoke some shouts from downstairs.

I have a whole house full of oak trim to install; attaching the baseboards and door trim is beyond the reach of this gun, but all the door stops and decorative edging on the trim will feel the sting of the Bosch pinner. The Bosch is a solid, well-made tool, and if you’re a woodworker, cabinet maker, someone who works with picture frames, builds birdhouses, or does any type of work requiring precision fastening where appearance is important, the Bosch FNS138-23 should be the perfect match for you. The Bosch FNS138-23 23-Gauge 1-3/8-Inch Pin Nailer

is available from our friends at Amazon for around $146. 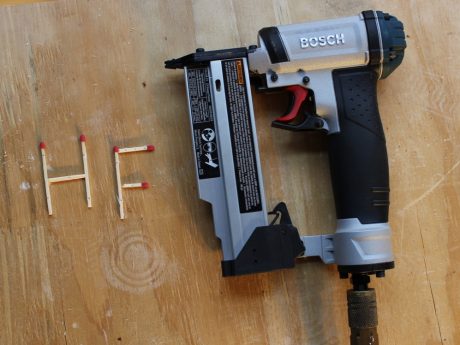