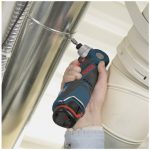 The Bosch PS10-2A cordless driver with articulating head is one of those tools that you’re really glad you have for specific projects. In particular, anytime you need to drive screws in hard to access places. I actually use mine as a general purpose cordless driver a lot of the time, but the PS10 really shines when it comes to tight clearances.

The PS10 driver saved me on a duct installation I was doing. The duct had a couple joints that were a bit awkwardly placed. I should pull a Donald Trump and fire that HVAC guy! Oh wait, that was a DIY project. Nevermind, I’m still “hired”. Can’t beat my zero dollar hourly rate. Suffice it to say that some of the joints could only be reached using the Bosch PS10. I attached a magnetic nut driver bit, and the duct screws we’re set in a heartbeat. Without the the Bosch driver, the project would have involved one of those little 90 degree manual screwdrivers, 6 hours, a couple skinned knuckles, and countless expletives. With the PS10, the project involved no drama. . . . just the way I like duct work to go.

Several details make the Bosch PS10 great. The tool features a variable clutch, with several settings from “Drill”, to a setting that disengages the driving mechanism when it hits mild resistance. It’s great for not stripping out screws once they are driven flush. I use the various clutch settings all the time. The articulating head on the PS10 is easy to adjust and makes it a breeze to get the perfect angle on that pesky screw in a tight spot. A single charge gets you lots of action (by “lots of action” I mean it drives many screws, not that it gets you dates). FYI, I’m restraining myself and editing out all jokes involving “screwing” here. Ball detent bits pop in and out of the driver with ease. Mine also came with a handy canvas storage bag that holds the compact charger, spare battery and spare bits. All in all, it’s a great cordless driver setup that will rescue you on more projects than you might think.