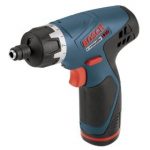 The Bosch PS20-2A doesn’t claim to be a full size cordless drill replacement. But once you get your hands on one of these, you may reach for it far more often than your standard cordless drill. . . . especially for driving screws. The Bosch PS20 is designed to drive, not to drill big holes. If you’re OK with more screwing and less drilling (and who isn’t?), then this is the tool for you!

One basic difference between a cordless driver like the PS20 and a standard drill is the chuck. With the PS20, you’ll need hex ball-detent bits (these are the longer hex bits with a little groove in them). If you plan to use little 1″ or shorter hex bits, you’ll want a separate magnetic bit holder for them. I personally prefer the detent bits over the magnetic bit holder. These longer bits won’t pull out of the tool when you pull them away from screws. I find the magnetic bits constantly get stuck in the fastener and I then have to remove the bit from the screw and plug it back into the holder. The PS20 can also handily drill small pilot holes, but again, you’ll need a hex drill bit, which you may not have handy in your tool box.

The PS20 features an 11 position adjustable clutch. This feature is common on many drivers and some drills, and it’s great for making sure you don’t over-torque your fasteners. If you’re fastening small screws and/or screws into soft wood, dialing in a lower clutch setting will help the tool stop driving before you’ve ripped right through the wood the screw is supposed to be gripping. There’s also a “drill” clutch setting designed for you guessed it – drilling!

Like most of Bosch’s 12V Litheon line-up, the PS20 is super compact, and very comfortable to work with. The ergonomics are excellent, and you may find yourself driving screws just for the sheer joy of holding the driver. The Litheon battery system is also great. Most homeowners and even contractors won’t need more than a battery for a typical job. And if you happen to be doing a very driver intensive task, the PS20 comes with a spare battery to swap out. Charging is also very fast with the included 30 minute portable charger. What I’m trying to say here, is that I don’t think battery life is going to be a problem for you. However if you fall asleep with your finger depressing the trigger, it’s possible it won’t be spinning any more in the morning. I personally engage the handy trigger lock when I take my PS20 to bed.

So is the PS20 nothing but power-tool goodness and Bosch teutonic tool joy? Almost! I have only two minor complaints:
1) The built in LED light. Having an onboard LED is genius, however having it mounted right by the trigger is not quite as geniusy. Yup, I said “geniusy.” It still sheds enough light to help in dark spots, but the front of the tool winds up casting a large shadow right where you need the most light (by the tip).

2) No on-board bit storage. Ok, I know the PS20 is tiny, but I still think Bosch could have made a small recess in the top or or side of the tool for a single bit. Most of us use a flat head and a phillips, and having one stored on the tool would mean you can have your two most frequently used bits readily available right on the tool (one in the bit, the other in on-tool storage). My very old Bosch cordless drill (one of the first cordless models they ever made) had bit storage like this, and I used it constantly.

The overall verdict: Don’t throw away your full size cordless drill, but do run out and grab a PS20 (or another driver in the Bosch 12v Litheon driver series)! You can pick up the Bosch PS20-2A Driver

for just under $100 from Amazon. Or if you’re lucky enough to be reading this in August 2009, you can win the Bosch PS20 in our Free Stuff giveaway, just for posting an insightful comment after any HomeFixated article!