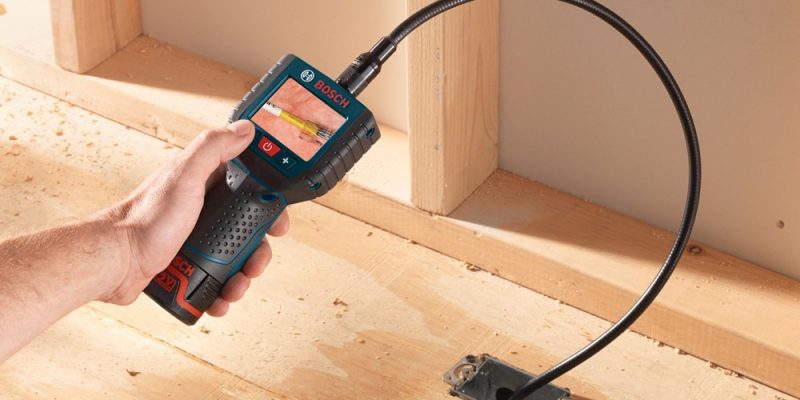 Before we dive into the Bosch PS90-1A inspection cam review, allow me to provide a little backstory. The original part of our farm house is probably over 150 years old. The floor joists are logs planed flat (more or less) on top, the framing lumber is pretty beefy, and there isn’t a single plumb, level or square surface in the place. The original building was updated, and an addition was put on, probably around 50-60 years ago, and judging by the number of scary and bizarre modifications worthy of HomeFail.com, no building inspector ever laid eyes on the place. I’ve found several live wires (both 120 and 240V) cut off, taped and buried within the walls, including one resting against the copper supply pipes for the bathtub!

In the basement, there is a concrete block wall built a foot or so inside the old rubble stone foundation, then covered with a stud wall and drywall. This has made accessing the plumbing and wiring near the outside walls a nightmare, and I’ve lost many an hour’s sleep pondering what lurks between those walls, what shape the original foundation wall is in, and why the hell that second wall was built in the first place.

Another problem area (something I have no shortage of) is our side porch. It has a metal roof and box gutters, and the roof was totally rebuilt about ten years ago. From the outside, it looks fine, but every time it rains, water somehow ends up inside the beadboard ceiling, dripping down through the headers, and sometimes even into the walls of the house over the entry door. We are not amused.

As I wrestled with my home’s inner demons, a blue plastic box courtesy of Bosch Tools arrived at the HomeFixated Corporate Global Headquarters, containing an answer to the age-old question: How the hell can I see what’s in my wall/ceiling/duct/pipe/dashboard/left ear/etc. without ripping it apart?? The answer was in the form of the Bosch PS90-1A 12-Volt Optical Scope. According to Bosch, the PS90-1A optical scope offers the best optics for clarity of image. It features a large 2.7” screen for easy viewing, and a 9-pin connector makes it easy to connect or remove the various attachments. Its bright LED light increases visibility in dark areas. It includes a video-out for easy connection and viewing, and has an on-screen battery life indicator icon.

The scope comes packaged in an oversized, sturdy Bosch-blue plastic case, along with a quick charger, a Lithium Ion battery, and an analog video cable. It’s lightweight, the rubberized grip fits very comfortably in the hand, and the unit appears rugged and well-made, like all other Bosch tools I’ve had experience with. It comes with three accessories that clip firmly onto the head: A magnet, a hook, and a little mirror. I can see where these could be very useful, especially the magnet and the hook.

The camera and accessories would have been mighty handy to have a couple of months ago, when my son and I replaced the oil sending unit on his old Jeep Grand Cherokee – first to FIND the damn thing, which is located completely out of sight near the top rear of the engine, and second, to find and retrieve the special oil sending unit socket, which naturally fell into an even LESS accessible area. The magnet is small, but fairly powerful, and would likely have drastically reduced the number of special DIY words that filled the air that day as our frozen digits fumbled to recover the socket.

I got the unit only recently, and haven’t had a chance to peer inside the cavities at the farmhouse yet; it is further north, and the septic system froze up when I was there, with fairly disgusting repercussions. Since then, my spouse has been reluctant to accompany me up there, even though I sprang for a Luggable Loo, after her scary encounter with three deer while answering nature’s call in the woods. Apparently she feels running water is ALSO a necessity; whatever happened to the pioneer spirit?! In the meantime, I went on a voyage of exploration at our Pittsburgh home.

I fed the camera head through a small existing “oops” hole in the wall, turned the light on, and had a look-see. The adjustable light works well, ratcheting up or down a bit each time you push the “+” or “-” key on the front. It takes a couple of minutes to get the hang of steering it around inside the wall; it’s a little disorienting navigating by camera. Having the ability to easily rotate the view would be handy, but once you get a feel for it, it’s very manageable. The wiring in the wall was illuminated nicely; the picture on the screen is very clear and sharp, with good color, and having a four-foot long cable gives you good reach. A six-foot long extension cable is also available from Bosch, in case you need to see WAY inside.

The diameter of the camera head unit is 5/8”, which means you can get it into a pretty tight space, including through the knockout hole in a standard electrical device box, which is 7/8”. The battery life is fantastic – I charged it when I first took it out of the box, and used it a lot over the next couple of weeks, including some stretches where it was on, with the light going, for over an hour. It’s still going strong, and hasn’t yet needed a re-charge. A Bosch rep stated that the battery should be good for 8-15 hours on a charge, depending on light usage.

Someone, my guess would be a Bosch attorney, felt the need to mention (three times) that “this is NOT a medical device.” If you visit your proctologist and see one of these on the medical cart, my advice would be to prioritize a search for a new medical provider!

One thing you CAN use it for is to scope out drain pipes or other areas that may be wet. The main body of the unit is not water resistant, but the flexible tubing and camera are, so if you want to check out the hairballs and other assorted nasty contents of your drains, the technology is yours! I filled our bathroom sink and submerged the camera end of the unit for several minutes, with the light illuminating the depths. The camera still provides a nice, sharp image of what lies beneath, and there were no moisture-induced glitches.

The camera comes with a 3’ analog video cable, which plugs into the back of the unit and has an RCA-type plug to go into the back of a TV or other video device. I’m not sure how useful this would be, unless you want to carefully explore the area around your entertainment center, but one of the reviewers on Amazon had a fix: the $43 Hauppauge 610 USB-Live 2 Analog Video Digitizer and Video Capture Device which would allow you to view and save the video image on your laptop computer, if you are so inclined.

Using the PS90 In the Real World

The PS90-1A has 24+ reviews on Amazon, all but two of which are very positive. Of the two that downgraded it, one was partially because “the picture was very clear, but the zoom didn’t work” (it doesn’t have a zoom; he also had a problem with the power switch), and the other was from someone who felt the light wasn’t bright enough, and decided he’d rather make a big hole and stick his head in (he got several amusing comments back). The only other negative comment a couple of people made was that the cable was stiff and could be difficult to rotate to orient the view properly on the screen. The stiffness isn’t really an issue; it has plenty of flexibility, and you want the cable fairly stiff, so it will hold its position when you feed it into a wall or wherever. It would be nice, however, to be able to adjust the view more easily, either by using a button on the handheld portion, or by more easily being able to rotate the camera head.

Some uses mentioned by reviewers included an HVAC tech, checking out inaccessible locations in commercial air conditioning units for leaks; someone who purchased it to do duct and insulation inspection in his home; a guy who used it to check the timing mark on his Yamaha Vx 110 engine; someone tracking down an issue in his car’s heater box; and several who wanted to peer into their walls to check on the existence and placement of wiring and plumbing before beginning renovations.

This camera may not be a tool you’ll use every day, unless you’re an HVAC technician, a mechanic, or a home inspector (and I’m sure there are many other occupations that would benefit from having this available). It IS a tool, though, that would soon pay for itself if you’re trying to track down a leak somewhere inside a wall (one reviewer was ready to rip out a tiled shower wall, until the scope showed him the leak wasn’t quite where he thought it was). It would also be irreplaceable for those times you need to see where you otherwise can’t – inside your ceiling or walls, the inner depths of your ductwork, or behind that 500-pound piece of furniture where you just dropped your ring. Your only limit is your imagination (just PLEASE don’t imagine any medical uses!)

Where to Buy the PS90

for just under $190 on Amazon. There’s also this package deal

, which gives you the scope and accessories, two 12V max lithium ion batteries, and the Bosch PS31-2A 12-volt 3/8-inch max lithium-ion drill/driver. For just a bit more cash, you get a nice little light-to-medium duty Bosch drill driver and an extra battery! The scope comes with a 30 day money-back guarantee, and a one year warranty. Let the explorations begin, and put YOUR inner demons to rest! 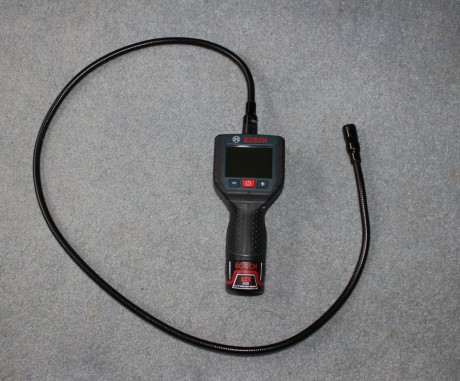