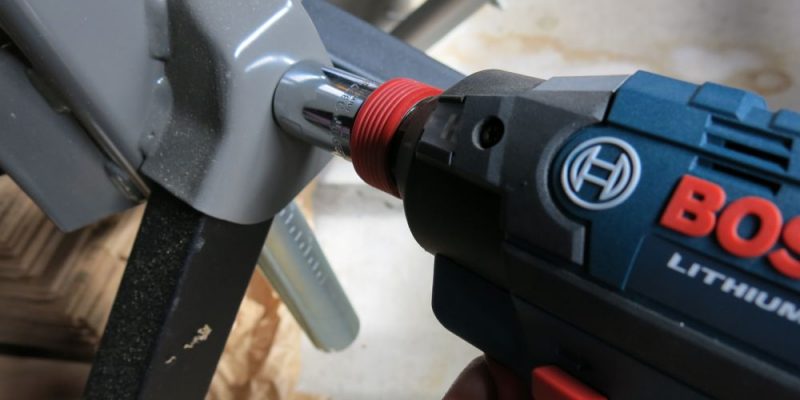 Circa 1998, I found myself on a dusty road on the outskirts of Tijuana. The dry air blew through the cab of the car lazily as I squinted past the grimy windshield. Suddenly, a billboard eclipsed the blistering sun just long enough for me to catch a glimpse: “Impacto Profundo” was written in an improbably-bold font. Yes, it was an ad for one of several asteroid apocalypse movies du jour. You might know it better by its English title, Deep Impact. What was I doing in Tijuana in 1998, and what does this little aside have to do with the innovative new Bosch Socket Ready Impact Driver? I’ll plead the Fifth on the first question. And, other than the word “Impact”, it has nothing to do with what I can promise you will be an enticing Bosch review worth its weight in Pesos (or Euros). Bosch sent us their new impact driver a couple months ago, and we’re ready to weigh in with our written and video review! Oh, and if you’re reading this in June, 2014, you have a shot at winning a Bosch IDH182-02L Socket Ready Impact Driver Kit absolutely FREE – completely avoiding any “Impacto Profundo” on your wallet!

Adapter rage. It’s no laughing matter. It can turn the most cool, calm, and collected DIY’er or tradesman into a furious, fire-breathing, profanity-spewing, frantic mess. All because they can’t find the adapter they need for their tool. Before you sign up for your local ARA meeting (Adapter Rage Anonymous), take a close look at the Bosch IDH182 Socket Ready Impact Driver. This brushless wonder sports a chuck unlike any you’ve ever seen. Before we dive into this innovative chuck that sets this tool apart, check out our video review that covers many of the basics:

Lots of brands have 18v impact drivers on the market. Some are even brushless. But only the Bosch Socket Ready Impact has a chuck that not only handles typical 1/4″ hex bits, but also a 1/2″ square drive to handle sockets sans adapter. If you happen to be a NASCAR or Formula One pit crew member that changes tires, you’re probably still going to want to hang on to your impact wrench. However, if you’re looking to drive lag screws or nuts and bolts that aren’t torqued into place by a gorilla, the Bosch IDH182 can whack many common fasteners into quick submission.

The socket ready feature even makes changing quarter inch hex bits easier thanks to its large, rubberized ring. Sockets are held securely in place by a friction ring. Despite the firm hold on sockets, getting them on or off involves little to no drama. If you never use sockets, then the socket ready innovation won’t mean much to you. However, just the need to drive lag screws alone makes the socket ready function very appealing for most users, particularly since you can completely avoid an embarrassing episode of adapter rage.

We were happy to see Bosch stepped up with three bright LED’s surrounding the chuck. We’re fans of this configuration as it tends to produce much more even, useful lighting than shadow-prone single LED tools. Aside from the trigger activation, Bosch also included a button for the LED by the base of the tool. The button can disable the LED entirely, or it can turn the LED on for about 10 seconds. I go off on a half hour rant about this in the video, but I can probably sum my thoughts up in a sentence or two if you haven’t already endured the video explanation. Given that Bosch went through the trouble of adding a separate button, I think they should have added a setting that simply turns the LED on as a work light and leaves it on until powered off manually. Given that the separate button only turns the LED off or turns it on for several seconds (something I can accomplish instantly with a slight trigger pull), I don’t anticipate using the separate LED button.

Bosch rates the maximum torque at 1,650 in-lbs, which just happens to be 50 in-lbs higher than Milwaukee rates their Fuel brushless impact driver. Interestingly, while Bosch sports higher RPMS, the Milwaukee comes in with higher IPM’s (Impacts Per Minute). Bosch has a max of 3200 IPM, and Milwaukee 3600. We didn’t have the patience to verify those counts, but lets just say we didn’t notice any shortcomings in speed or power with the Bosch Socket Ready Impact Driver. It performed admirably on tasks ranging from subflooring screws to more meaty fasteners like lags.

While 1650 in-lbs of max torque is a very respectable figure, it doesn’t quite compete with most impact WRENCHES. While you might be able to do 90+% of loosening and tightening lug nuts on your Formula One car, keep an impact or torque wrench on hand to handle the initial breaking the nut free and final tightening it up. Some folks get confused with impact DRIVER vs impact Wrench. . . just keep in mind each has their own intended uses and they’re not interchangeable for most heavy duty tasks.

If you’re a fan of the Three Little Bears story, then you’ll also be a fan of the variable speed selector on this tool. Actually, you’ll probably like this feature, even if you have a distaste for Goldilocks. Setting 1 delivers a “delicate” 0-1300 RPM / 0-1100 IPM, perfect for light duty fasteners that require some finesse. Settings 2 and 3 deliver up to 2000 RPM /2600 IPM and 2800 RPM / 3200 IPM respectively for your more robust tasks. With the three options just a button press or two away, you’re sure to find a power setting that’s “just right!”

Onboard Bit Storage and Accessories 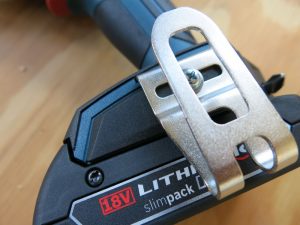 The Socket Ready comes with an optional belt clip you can affix to either side for quick-draw, gun-slinging driving. I was also happy to see a subtle onboard bit storage area at the base of the tool. We’re fans of onboard bit storage as you might have noted in our video review above. You’ll want to make sure the bit you store there is long enough to grip as shorter bits could easily get trapped in the bit holder. The double-ended bit that accompanied the tool works just great in there, especially after the storage gets broken in with a little bit of use.

Aside from the socket ready innovation on this tool, the biggest standout for us was ergonomics. I dive into more detail here in the video portion of this review, but the Socket Ready Impact Driver sports a svelte, slender grip that feels custom-made for my hand. Aside from the tactile delight of the grip, the tool is also well-balanced. With the slim pack battery in place, the weight distribution of the tool felt very even and comfortable. If you use an optional 4.0 AH battery, you might find the weight distribution biased towards the base of the tool (which is still preferred vs the head of the tool being too heavy).

Pricing, Options and Where to Buy

From the innovative Socket Ready chuck, to lean and mean performance, to stellar ergonomics – the Bosch 18v Socket Ready Impact Driver proves itself a worthy contender in the world of high performance, brushless impact drivers. If you’re ready to buy, get ready to experience “Impacto Profundo!” The tool is available in a variety of configurations ranging from $179 to $329, with and without the Bosch L-Boxx system: