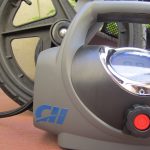 A good friend of mine was recently complaining about how he spends an inordinate amount of time re-inflating things. Bike tires, car tires, balls, strollers, wheelbarrow tires, his blimp. . . the list goes on and on. I’ve been using a Black & Decker Electromate 400 Jump-Starter with Built-In Air Compressor

for all my inflation needs. Recently, Campbell Hausfeld sent us their RP4200 120v inflator to review. Unlike the B & D Electromate, the RP4200 is designed exclusively for inflation (the Electromate 400 can jump start your car, has a light and can power small 120v devices off its built-in battery). The RP4200 Inflator has some unique features that separate it from many of its single and multi-function inflator competitors, including a cool pressure preset system. 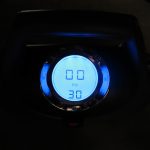 The pressure preset feature is a real stand-out on this inflator. After you plug the RP4200 in (with any 3 prong extension cord), you just connect the air hose to the valve of your tire. The inflator will then show you the current tire pressure in all it’s LED backlit glory. As you can see from the image here, the RP4200 also makes a very sexy ambient mood light. I’m thinking about just leaving mine plugged in at night to maintain a groovy yet high-tech vibe. You’ll see two large numbers on the display. The top larger number is your current pressure. The lower smaller number represents what you want the pressure to be (between 20 and 99 psi). Simply rotate the dial to the pressure you want. Press the red power button and the compressor chugs away until it hits the target psi, at which point is turns off. Pretty sweet.

The fact that the inflator turns off at the preset psi eliminates a long-held phobia I’ve had. I’m coining it inflataphobia: an intense fear that I’ll become distracted during a tire inflation (possibly by Miss Makita or Señorita Makita for example), and then wander off. During my distraction, the inflator continues to blindly inflate until the tire explodes, launching tire shrapnel in a 50 foot blast radius. While I don’t necessarily recommend wandering away from your inflator, it’s reassuring to me the CH RP4200 is designed to shut off at the psi you’ve designated. The inflator also has a “Lo” pressure setting that’s used for inflating stuff that really can explode pretty quickly. Unlike the set-and-forget higher pressures, if you’re inflating your soccer balls, you’ll need to turn the unit on and then off once the desired firmness has been reached.

Another little detail I loved is the valve cap holder. Yes, it’s just a plastic nub to put your cap on, but it’s also genius. In my life, I’ve probably lost about 500 valve caps after leaving them on the ground next to whatever I was inflating. It’s so easy to get caught up in the intense excitement / fear of inflating something, that you forget that little valve cap on the asphalt somewhere. To the engineer that thought of that one, I salute you. The recess around the plug area for your extension cord is also well planned and thankfully roomy. That means if you have an extension cord with a bulky end, it will likely still work with the RP4200. A couple inflation needles are also thoughtfully stored next to the plug area. And CH graciously included a little wall mount which makes for a very handy way to store the very compact inflator and keep it readily accessible. 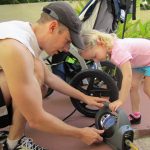 One of my tests of the RP4200 involved re-inflating the tires on our running stroller. Frankly, we rarely run with this thing. I like to think of it as insurance in a stroller. . . it has running capability when needed. Crossing the street on a yellow light, escaping a rabid dog, avoiding a crashing airplane, etc. are all potential uses for the running feature. Anyway, the 4200 inflated those tires to target psi almost instantly. My impression is that the RP4200 is significantly faster than my Black and Decker inflator.

As you can see, our pink sound level meter thought the Campbell Hausfeld RP4200 was loud. I tested it with HomeFixated’s new (electronic) sound level meter (no more “it’s kinda loud” reviews from us). We found it peaked at about 85.5 dB about three feet from the inflator. By comparison, the Black and Decker Electromate peaked at 85.7 at the same distance. So yeah, it’s loud. But then so is every other powered inflator I’ve used (other than compressed air).

One feature I would have liked to see is a air bleed function. Ideally this would be integrated into the pressure sensor. Then, if the tire is over-inflated, you dial in the ideal lower pressure, and the RP4200 would then bleed air till it hits the target psi. If that’s too much of an engineering hassle, a manual bleed button could be integrated into the end of the hose that connects to the valve stem. Sure, you usually want to add air, but sometimes you’ll find tires that are actually over-inflated. You’ll see the bleed valves on higher-end tire pressure gauges often used for car racing.

So, if you suffer from inflataphobia, or you’d just like a single purpose, easy to use, compact inflator, we think the RP4200 is worth a strong look. At $78 on Amazon, the Campbell Hausfeld RP420000AV 120 Volt Inflation System

isn’t cheap, but it’s a bargain compared to inflataphobia treatments with your local shrink.