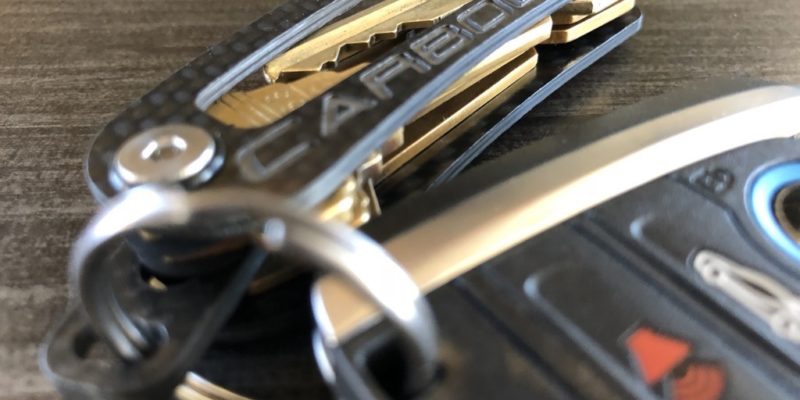 It’s a pitch black night. You’ve been out partying with friends on a weeknight, in clear violation of your significant other’s rules. Your only hope is that it’s after midnight and if you can just sneak back into the house unnoticed, it will be like the transgression never happened. You step out of the car, gently nudging your car door closed with a stealthy butt-bump. Nice work! You tip-toe across the driveway and up the walkway like you’re a gazelle-sloth cross-bread. Perfect! You made it to the front door silently! Now, you just need to carefully take the keys out. Of. Your. Pocket. (Cue a cacophony of jingle-jangle-clinking-clanking here). You’re screwed now! Your freshly-woken spouse opens the door and greets you with an angry mug rather than a morning hug. Clearly you should have read this review of the Carbocage Keycage before your night out! If you want to avoid making the same mistake outlined here, or you just prefer less jingle-jangle-clinking-clanking on your keychain, it’s not too late for you.

Keyless entry and high-tech locks are all the rage, but unfortunately most people still have to rely on those barbaric jagged pieces of metal that have changed relatively little in the last century – keys. Even if you have a fancy-pants keyless deadbolt you can unlock with your phone, you probably still have other keys for work, your relative’s house, and your safe deposit box filled with millions of dollars in untraceable bearer bonds. The conventional approach to dealing with this abundance of keys is to place them on a keyring. Genius, right?! Take a bunch of sharp, jagged shards of metal and then combine them into a shuriken-like mass that most men place in their front pockets, ahem, close to other precious cargo. Or, they’re dropped into that $2000 Louis Vitton purse to ruthlessly shred its interior, rendering said purse worthless. What is a pant-wearing or Louis Vitton purse-toting person to do?!

I’m sure you all do this too, but one night I was casually perusing Amazon for a way to make my keys more orderly (because I’m OCD, not because I ever sneak back into my own house in the dead of night). I had seen other Keycage-esque offerings online, and although many exist, few seem to have good reviews. More on that below. I was intrigued by the Carbocage Keycage due to it’s minimalist aesthetic, lightweight but strong carbon fiber body, solid appearing reviews and sexy but understated looks. Yes, I like my key gear sexy and understated. Plus it is made in Germany, which I correctly assumed would equate to fairly precise build quality.

Have you ever noticed most keyrings appear to be designed to keep keys out, rather than in? Your manicurist will be pleased to hear that your days of risking your fingernails prying apart stubborn keyrings are (mostly) over with the Keycage. However, as they like to say in the fine print, “some assembly is required.” The Keycage comes with a simple visual instruction guide, but we can sum it up pretty easily here too:

The makers of the Keycage tout its single-hand key deployment. Whether you can deploy your keys single-handedly depends on your level of hand dexterity, how many keys are in your Keycage and how tight you made the allen bolts. The open-body design helps you nudge keys on either side outward, making them easier to fully deploy. I resisted the urge to over-tighten the bolts. As a result, the keys in my Keycage are loose enough to swing out with minimal effort, but tight enough that they don’t deploy without me wanting them to. All in all, I found the Keycage easier to use than old-school Swiss Army knives.

Are There Any Downsides to the Keycage?

If you are walking in a forest with a Carbocage Keycage you might unpleasantly surprise a bear that you would have normally frightened off with your jangling keys. Also, without a shuriken of keys in your pocket, you may find your pockets remain intact, resulting in less ventilation through your pockets. Also, if you have more than 14 keys, you can’t use the Keycage (If you have more than 14 keys, you’re probably a janitor. And if you’re a janitor, I’m pretty sure you’re required to use one of those retractable keychain thingies anyway). Ok, so there are a few minor actual downsides.

If you frequently add or remove keys, the Carbocage Keycage requires fiddling with an allen wrench, bolts and washers each time. The keys also aren’t as visible as they are on a keychain, particularly if you have more than four keys nested in the Keycage. The interior keys can get a bit lost visually. Lastly, the interior keys can be a little tricky to deploy. That’s again especially true if you have more than four keys.

I also considered the slightly less expensive KeySmart, which sells for around $23 for its basic version. While the KeySmart is popular and has many positive reviews, quite a few reviews complained of poor quality and a tendency for the bolts to work themselves loose. I suspect the loosening of bolts is a common issue among similar key cage solutions, although Carbocage minimizes this with including rubber O-Rings for the bolts. Whatever model you choose, a drop of LocTite might be just what the doctor ordered to keep your optimal tightness dialed if you have any trouble with the bolts loosening. The KeySmart also leaves a lot more of the actual keys exposed, which is good for identifying your keys, but not so good for keeping them folded up and tucked away.

Free Range or Captive Keys – Should You Buy a Carbocage Keycage?

If you like to scare off bears or spouses with loud keychain jingle-jangling, then the Keycage is NOT for you. However, if people frequently accuse you of being overly tidy (that’s their jealousy, btw), then the Carbocage Keycage is definitely worth checking out. Although it’s substantially pricier than your average keychain, I have found it brings a welcome level of stealth and order to my EDC (Everyday Carry).

You can buy the Carbocage Keycage for around $30: