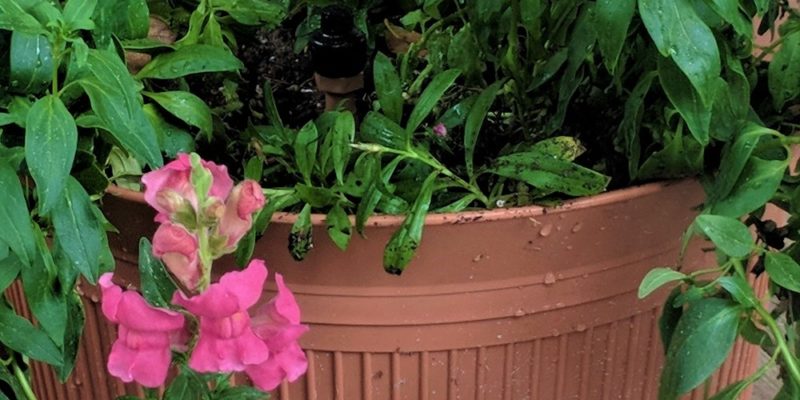 Any gardener knows that dragging a hose around the yard can be a real pain in the neck, particularly when it keeps getting kinked up. It’s also annoying when you have a plant that needs soaking on a regular basis, but you don’t enjoy getting eaten up by mosquitoes in the process. That’s where the Daisy Rain Garden System comes in handy. It connects a series of large pots to your hose so that all you have to is turn on the spigot and let it run for a while. You don’t get eaten alive by bugs and you won’t have to run around your yard with hoses either. Sounds promising, doesn’t it?

Daisy Rain Garden Systems sent Home Fixated several pots and their integrated irrigation for us to review. As a long-time gardener, I eagerly stepped up to the plate. These planters arrived promptly on my doorstep. I was initially dismayed to find out that they came with what seemed like a ton of little plastic pieces and no real instructions. After some searching, I found the instructions wrapped up in one of the bags along with all the parts. No doubt that protects the paper documents from getting ruined in transport if the box gets wet. However, it does make them a bit hard to find.

Here’s a quick video overview from the folks at Daisy Rain Garden Systems:

Pretty much everything you need to set up the kit is included in the box except for a water hose, something something sharp to cut the tubing, potting soil, and plants. Fortunately, my father is a mechanic and he has a PVC cutting tool that I borrowed for this project. It worked pretty well for the most part. But it did leave a somewhat jagged piece of plastic that had to be pulled off in one instance. I advise using scissors to trim off the excess if you have the same problem, or use a more specialized tubing cutter if you have one handy.

The instructions included with the Daisy Rain pots were easy enough to follow. They weren’t as detailed as they could have been but it wasn’t hard to figure out where the pieces went during the set up process. The pictures included with the instructions were fairly helpful. Just be aware that you’ll want to completely assemble the pots before you start putting in the dirt and plants!

I nonetheless found that it required copious amounts of arm strength to shove the tubing around the t-shaped pipes. This is where you will want to use the recommended implements to soften up the tubing first. I didn’t bother with that step, because I mistakenly thought that only pertained to people who weren’t using specialty tools to cut the piping. (Note: it doesn’t!) 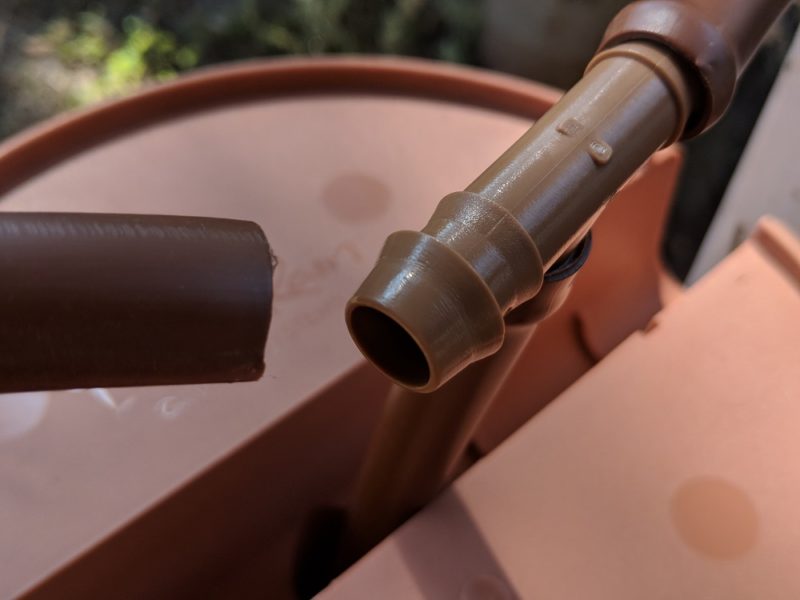 Soften these pieces before putting them together. No matter what you’re using to cut the tubing, don’t skip softening the tubing! I’m pretty strong for someone my size. But my muscles still ached from the effort the next day. Doing this also caused the skin on my palm to turn red and sting for bit. So you have been warned!

These pots are probably best for water-loving plants that are either shallow-rooted or that are not fully developed yet. Because the sprinkler portion sits near the middle of the container, planting anything with very deep roots in them could be a bit of a hassle. This aspect could also leave your potted plant looking lopsided, at least until it grows out.

The photos on the box show the Daisy Rain pots holding a plethora of annuals, so that’s the route I took. I got pansies, dianthus, violas, and a set of snapdragons that were on sale at Lowe’s. I could have probably gotten more plants in them. However, I don’t like crowding the containers because the plants always end up with powdery mildew in those instances. A few did anyway, those pansies!

You could probably move any smaller plants that you already have into these pots, if you don’t want to buy more of them. Just make sure that any plants you’re putting in the same container have similar water requirements. For instance, you could fill the planters with all mints or all Mediterranean herbs. However, putting drought-tolerant plants (like the Mediterranean herbs) in these containers might not be the best use for them, since those plants don’t particularly need a lot of water in the first place.

It took 1.5 bags of potting soil (about 3 cubic feet) to fill all 3 containers, give or take a bit. However, you need to be careful when filling these pots up to keep the sprinkler heads perfectly centered as you’re adding in the dirt. Otherwise, it’s very easy to end up with one that’s a bit lopsided. Adding in the plants was a simple process.

The first time I used my Daisy Rain pots, 2 out of 3 sprinklers worked just fine. To troubleshoot the issue, I took the top piece off the nozzle and about soaked myself. Don’t do this while the pots are still hooked up unless you want to cool off in the summer. I later discovered that the nozzle’s water output can be adjusted by turning it one way or the other. This quickly resolved my problem.

Just be aware that these sprinklers don’t have a heavy output, even when the hose is turned on full blast. They work best when they are allowed to run for a bit, so that the potting soil gets completely soaked. You may also want to place your plants closer to the center of the pot rather than on the fringes if they need lots of moisture.

This device works best if you have a hose (and possibly a spigot) that’s specifically dedicated to the Daisy Rain system. Or you could just have all your plants in sprinkler pots. Without either of those being a viable option, I was constantly having to hook and unhook the hose to make sure all my other plants got watered. I felt this defeated the product’s purpose a bit – a dedicated hose bib is best.

I think the basic Daisy Rain system works very well. The Daisy Rain pots are also a decent size and can hold a good assortment of plants. They can easily be set up in numerous configurations, including around corners (as you can see in the photos). I additionally liked the fact that these planters were made in the United States, since I feel it’s important to support our fellow citizens in their business endeavors.

However, there seemed to be a lot of plastic waste left over once I was done, which I didn’t like. I think this issue could be mitigated by simply enclosing all the small components in one bag and allowing customers to select the types of sprinkler heads they want beforehand. That way they’d only receive the parts they need to finish the project and there wouldn’t be so many plastic bags to throw out.

I also noticed that the Daisy Rain pots occasionally had a slight leak at the hose/planter connection site. This was easily solved by replacing the old hose I had been using with a brand new one and making sure the devices were tightly connected. I haven’t had any further problems since. I rather liked the Daisy Rain pots and will continue to use them.