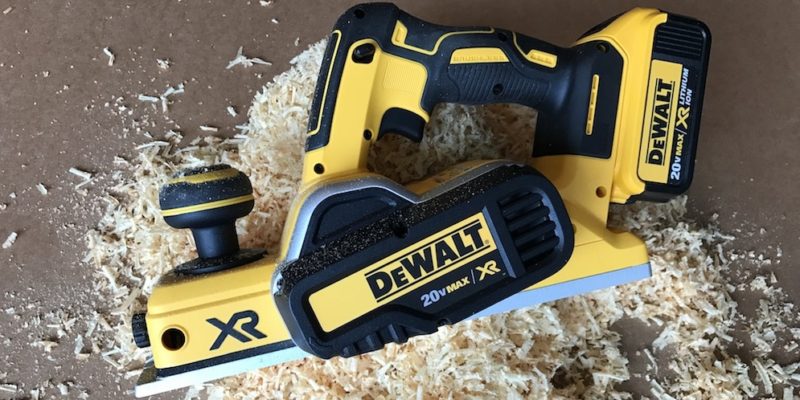 Our house, just outside of Pittsburgh, is roughly 130 years old. As with most houses this old, our home has a lot of character. Like most people who own these older homes, we spend a fair bit of time – and money – rectifying this “character.” One example of this is the old wooden six-panel doors. They look great, but varying humidity, and the untiring efforts of that old rascal Gravity, means that pretty much every year there are two or three doors that need a bit of a shave to keep them from sticking. This year’s trim job just got bumped up on the honey-do list, thanks to the arrival of a DeWalt DCP580 Cordless Planer from the folks in yellow and black.

In the past, I’ve used corded planers, and a good old-fashioned block plane, to get the job done. The block plane was loaned out over a year ago, and has yet to find its way home; time for a “friendly” reminder. The corded planer does a good job, but I’m a procrastinator by nature. The thought of having to locate the planer AND the extension cord AND take the doors off AND drag everything outside is all the excuse I need to convince myself my time would be better spent doing pretty much anything else. The idea of slapping in a battery and getting to work is just plane enticing.

The Plane Facts On The DeWalt DCP580 Cordless Planer

The DeWalt DCP580 cordless planer is sold only as a bare tool. This makes the unboxing process pretty straightforward: Lift it out of the box. No assembly is required; just slide on any DeWalt 20V MAX battery, and you’re ready to shred.

The tool is not overly heavy, but it looks and feels solidly built. It’s powered by an efficient brushless motor, and the blades, which have a cutting width of 3-1/4″, are driven by a Poly-V drive belt. The DeWalt DCP580 cordless planer has very good ergonomics; a rubber overmold makes it easy on the hands, and the trigger and safety are easy to operate.

DeWalt packed a lot of features into the DeWalt DCP580 cordless planer. Trashed the blades because you didn’t get quite all of the nails out of that board before planing? Screw off the cap on the little cubbyhole built into one side, and there’s a fresh set of blades waiting. Assuming you bought some and tucked them in there. The Allen wrench used to change the blades tucks away securely alongside the handle.

There’s a little kickstand built into the back end of the planer, so you can set it down on your work without gouging the wood. This isn’t as much an issue with the DeWalt DCP580 cordless planer, because the blade stops spinning almost instantly when you release the trigger. The kickstand moves back out of the way when you move the planer forward, and it can be quickly locked up and out of the way.

The DeWalt DCP580 cordless planer comes with an edge guide, to keep your glide path straight. This is very handy if you’re trying to cut a rabbet in a piece of material. There’s also a V-notch down the center of the front shoe, which makes it easy to make accurate chamfer cuts on the edges of your material.

Adjusting the depth of cut is simple. A large, easy to grip knob on the front of the planer adjusts the depth of cut from 0 to 5/64” in 20 increments of 1/256”. The scale is easy to read, and the depth stays solidly locked in. The knob also serves as a good grip point for your support hand, and has a good rubber overmold coating.

Here are the features and specs from DeWalt:

Plane Around With The DeWalt DCP580 Cordless Planer

To give the DeWalt DCP580 cordless planer its first taste of sawdust, I grabbed a set of bifold doors from a basement closet. I set them on edge, slid a 4.0 Ah 20V MAX battery into place, and set the depth of cut to 1/16”.

I pulled the trigger, and the DeWalt DCP580 cordless planer glided its way down the length of the door. It had plenty of power to make the cut, and was easy to control. The surface it left behind was smooth and even, with almost no tearout at the edges. The noise wasn’t bad, but if I was shaving wood all day, I’d probably grab some hearing protection.

I also tried out the chamfering groove on the DeWalt DCP580 cordless planer. I ran it down the edge of a 4×4” post, and it did a great job of chewing up and spitting out the sharp, splintery corners. I’m planning to make a play set for my grandsons, and that feature will make quick work of making the corners less hazardous to small bodies.

Note: Because of the depth of the groove, the planer takes a LOT more material off than it does on the flat. To prevent unnecessary foul language, test out your chamfer cuts on a piece of scrap before you tackle the good stuff.

Let The Chips Fall Where They May

Now for the only gripe I have about the DeWalt DCP580 cordless planer – the lack of a dust bag. If ever there was a tool that needs dust and chip collection, it’s a planer. It chews up wood and spits it out almost as fast as the federal government goes through your tax dollars. If you have a bit of planing to do, and no dust collection in place, be prepared to spend some time tidying up. When I planed the bifold doors, I did the first 1-1/2 passes without a bag, and spent more time cleaning up the shavings than it took to shave the edge.

The planer could be hooked up to a vacuum system if you have one, with the right adapter. That kind of defeats the purpose of a cordless tool, though; the beauty of the DeWalt DCP580 cordless planer is its free-ranging, untethered spirit.

There is a dust bag available for the DeWalt DCP580 cordless planer. I bought one, and it works great. Unfortunately, it’s not available at any local retailers. You can purchase it through DeWalt’s ServiceNet site; here’s a link to the page to order it. Scroll down the page until you see the parts you want; you’ll need the deflector and the dust bag. (While you’re on there, you may want to pick up a spare set of blades, too, and tuck them into that little hidey-hole…) The prices aren’t outrageous, totaling around $19, but then you have to pay $11 shipping. A bit pricey for something that should be included, or available for purchase locally.

The DeWalt DCP580 Cordless Planer – Should You Catch This Plane?

I really like the DeWalt DCP580 cordless planer. It’s well-made, powerful and easy to use. Being able to just grab the planer and set up without having to schlep an extension cord, and find power, is a big time saver. It’s also nice not to be tripping over a cord, or having it snag on the corner of a door 3/4 of the way through the job. Having the planer around makes it more likely I’ll get the doors shaved down BEFORE they get stuck shut.

The DeWalt DCP580 cordless planer would be a great addition to any work shop or carpenter’s truck. It would be especially handy for someone doing punch list work for a builder or maintenance crew. DeWalt backs the tool with a three-year limited warranty and a year of free service. It’s also covered by a no-questions-asked 90 day money back guarantee. Try one out, and see if you can shave some time off your next project. 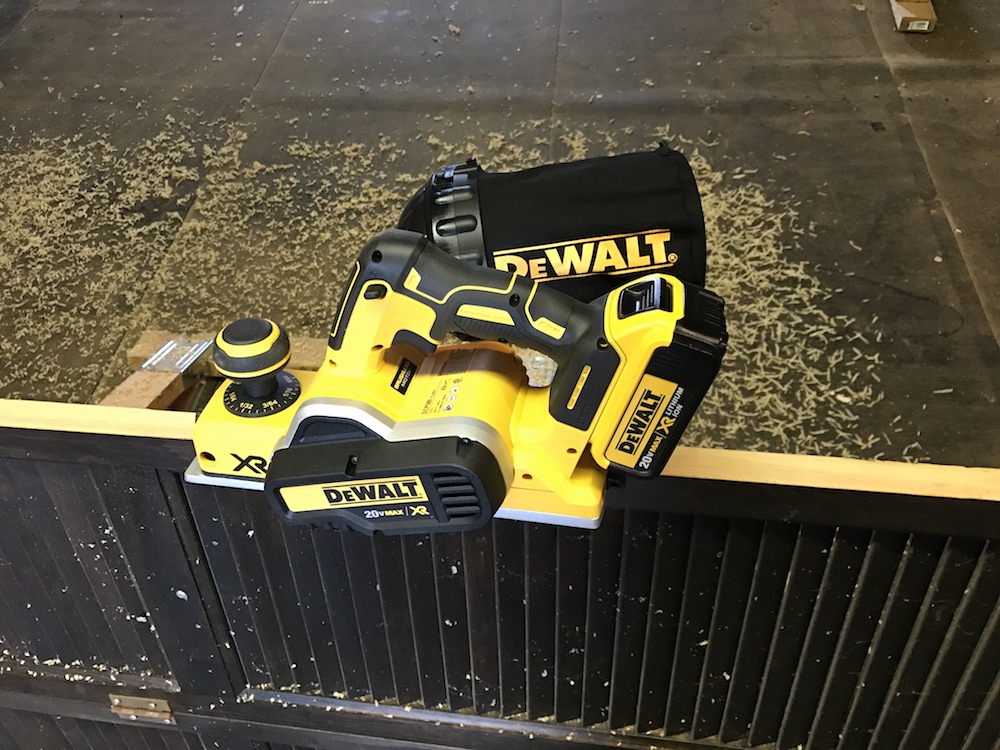 The Home Depot carries the planer for around $179:

Buy the deflector and dust bag from DeWalt for around $20 plus S&H: