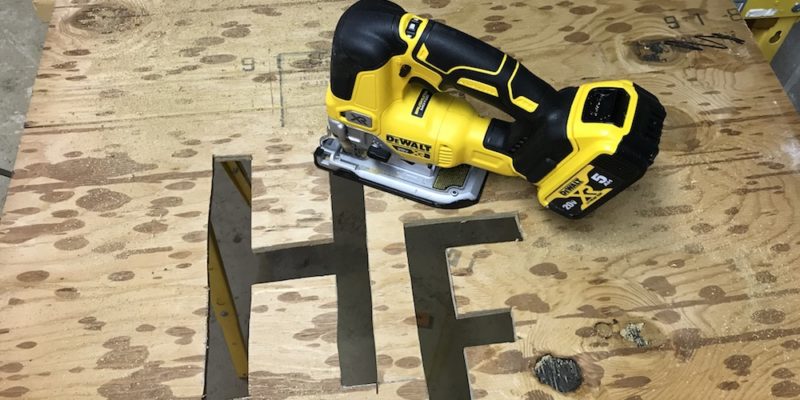 Here’s a bit of wisdom I just came up with, exclusively for HomeFixated readers: “Use the right tool for the job.” Pretty profound and original, don’t you think?! Anyway, if the job in question is making a cut in a straight line, you have lots of options. When you need to make a cut that bobs and weaves like a cornered politician, though, your options go way down. Frequently, the tool of choice for making curved or circular cuts is a jigsaw. I have an old one that did a pretty good job of it, right up until the plunging mechanism somehow got twisted a bit, and the motor started making scary sounds. Fortunately, the folks at DeWalt sent us a sporty yellow and black DeWalt DCS334 cordless jigsaw to evaluate. Join us on our twisted exploration of its features.

The predecessor to the DeWalt DCS334, the DeWalt DCS331, has been around for several years. DeWalt took what was already a very capable tool and updated it – and upgraded it – in several areas. The biggest upgrade to the new version is the brushless motor. It has more power, runs more smoothly, and runs cooler and more efficiently. It’s also faster, at 3,200 SPM (strokes per minute) vs. 3,000 on the older model.

DeWalt also improved the blade clamp design on the DeWalt DCS334. The new saw accepts only T-shank blades, and the all-metal tool-free blade clamp locks them quickly and solidly into position. The addition of an LED light on each side of the blade helps illuminate the cut line, improving the odds that you’ll cut where you want to cut.

Like being in control? Another big improvement in function on the DeWalt DCS334 cordless jigsaw brings it. In addition to the variable speed trigger, a speed control dial on top of the handle lets you limit the saw’s top speed. This provides an amazing amount of control when you’re trying to make slow, precise cuts. Here’s the official list of features and specs:

Scrolling Through The Features On The DeWalt DCS334

The first thing I noticed when I liberated the DeWalt DCS334 from its sturdy case is how robust it is. The saw has a great heft to it, and appears solidly built from top to bottom. The front end is all metal, including the blade clamping lever. The handle has a rubber overmold, making the saw more comfortable to hold, while helping reduce vibration.

Getting a fresh set of teeth installed on the DeWalt DCS334 is fast, easy and tool-free. To eject the old blade, simply swing the blade-clamping lever out. The mechanism isn’t spring-loaded, but the blade drops out easily. Pop in a new blade, release the lever, and get cutting. Here’s a cutting-edge HomeFixated tip: Unless you’re fond of scars or the nickname “Stubby,” lock the trigger or remove the battery before swapping blades.

Also included with the DeWalt DCS334 is a no-mar shoe cover. This is helpful when you’re cutting on surfaces you, or someone with a volatile temper, would like kept in pristine condition. The cover is very easy to pop on and off.

The saw also comes with an anti-splinter insert, which can be attached either to the shoe or the no-mar cover. When I used it, the insert tended to come loose.

Getting back to the “control” set of features, the DeWalt DCS334 lets you switch among four levels of orbital action. Actually, three levels of orbital action, and a “straight” setting, with no orbital action. This is best for cutting harder materials, like metal and hardwoods. When you’re in an all-fired hurry, you can choose a level of orbital aggressiveness to speed cuts through softer materials, like softwood and plastic. The tradeoff for this gain in speed is a less smooth cut, so it’s best to use a slower, straight cut for finished surfaces.

Cutting with a jigsaw can generate a lot of sawdust, most of which exists for the sole purpose of covering your cut line. The DeWalt DCS334 has a built-in dust blower, to help clear a path. I found that it worked pretty well when cutting at higher speeds, but at slower speeds I still had to supplement it with an occasional puff of minty operator breath.

As we mentioned earlier, the DeWalt DCS334 has a speed-limiting dial, in addition to the variable speed trigger. The trigger is very easy to use, and offers great control over the saw’s speed. Used in combination with the dial, you can limit the top speed, so you can just crank the trigger all the way without worry about losing control. Setting the speed dial to 1 and using the variable speed trigger lets you go VERY slowly and precisely.

A final feature worth mentioning are the twin LED lights found on the DeWalt DCS334. LED lights seem to be an expected feature on most new cordless tools. When they first started to appear, some of them were pretty worthless, either in terms of the illumination provided, or where they were aimed. Or both. The tool designers have some experience with it now – you might say they’ve been enlightened – and in many cases, including the DCS334, the lights are actually bright and useful.

Preparing To Get Jiggy With The DeWalt DCS334

Enough with the features; let’s slice something up! To give the DeWalt DCS334 cordless jigsaw its initiation cut, I used the blade that came with it to make a cutout in a piece of ½” plywood. Rather than suiting up and trudging 100 yards to my shop through a steady snowfall on a windy 5° day, I headed for the basement. I drilled a few starter holes, and plunged in. The saw was very easy to control; using the combination of the speed dial and the variable-speed trigger, the saw offers excellent control over the blade’s speed.

The lighting in the basement isn’t the best, so the twin LED lights on the front of the saw were actually quite helpful. Unfortunately, my vision is still crap, so the cuts weren’t perfect, but I suppose I shouldn’t blame that on the saw. But then again…how about a laser-guided line tracking feature, DeWalt?

Next, it was time to try out the saw’s beveled cutting ability. I clamped a piece of ¾” plywood to a work table, set the bevel to 45°, and fired up the DeWalt DCS334. The saw had plenty of power, and had no trouble at all zooming through the cut. Note: Unless you want a “live edge” look for your angled cuts, use a straightedge to guide the saw.

Swapping the wood blade out for a metal-cutting blade, I made several cuts in a piece of ¾” copper pipe. The DeWalt DCS334 zoomed quickly through it, making nice smooth cuts every time.

Then it was back to a wood-cutting blade, to make some circular cutouts in some sturdy Pergo XP kitchen floor tiles.

Put It To The Floor

The saw’s next mission required a bit more finesse. We were installing some fairly pricey engineered flooring, and had several cuts to make, around heat vents, cold air returns, and other pesky obstacles. The protective shoe cover on the DeWalt DCS334 cordless jigsaw, along with some painter’s tape, kept the surface pristine and splinter-free. Once again the LED lights came in handy, when venturing into the darker corners.

During all the cutting I did, the saw handled very well, with much less vibration than my corded jigsaw. When the trigger is released, the blade stops instantly, which should help reduce the frequency of foul language. Jigsaw-induced foul language, at any rate.

Since I was at our farm for the initial testing, and had no T-shank jigsaw blades, I ordered a variety pack from (where else?) Amazon. It included blades for wood, metal, laminate and plastic.

The deciding factor in buying this set was that it came with a double-sided plastic case, capable of holding even more than the 14 blades it came with. I have lots of blades at home that came on a cardboard sleeve, and the blades end up all over the place, so I’m very excited to have a way to keep my blades corralled. I know, I need to get a life…

Ready To Take The DeWalt DCS334 Cordless Jigsaw For A Scroll?

If you’re looking to add a jigsaw to your tool collection, or perhaps to replace an older corded model that may have scrolled past its prime, check out the DeWalt DCS334. It’s very robustly built, with a great set of features that should keep any contractor, DIYer or woodworker happy.

The only feature some might yearn for is a dust collection port. It’s available on the European version of the DCS334, and there are connection instructions in the U.S. manual, so hopefully it will be available later this year.

Already got a DeWalt battery and charger? The bare tool version is about $150 cheaper. Both versions include a no-mar shoe cover, an anti-splinter guard, and a wood-cutting blade so you can rip right into something. If you buy the bare tool, and want to get the hard case for it, Kitbox #N577969 can be purchased for around $35 from DeWalt’s ServiceNet web site, or by calling 1-888-678-7278.

For you woodworkers and others who like to get as close to the action as possible, DeWalt also has a barrel-grip version of the new XR jigsaw, the DeWalt DCS335. Most of the features and specs are identical to those of the DeWalt DCS334, minus the handle and trigger, of course.

The DeWalt DCS335 should be ready for you to get a grip on it around the end of February 2019. Meanwhile, here’s a little teaser video from Australia of a kangaroo cleverly disguised as a human, taking the DCS335 for a spin to some rockin’ Aussie music. Crikey!

DeWalt backs the DeWalt DCS334 Cordless Jigsaw with a three-year limited warranty, and a year of free service. Their 90 day money-back guarantee offers you a chance to get jiggy in a risk-free fashion. So scroll on down, order one up, and go make some sawdust in your own twisted fashion. 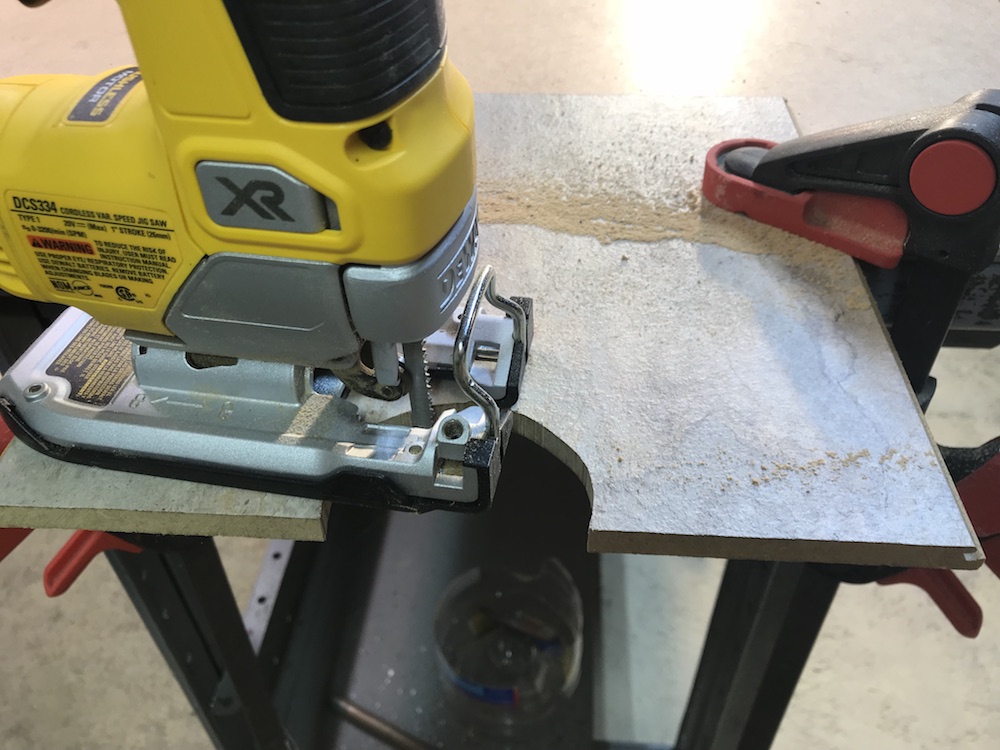 Buy the DeWalt DCS334 bare tool from the Home Depot: