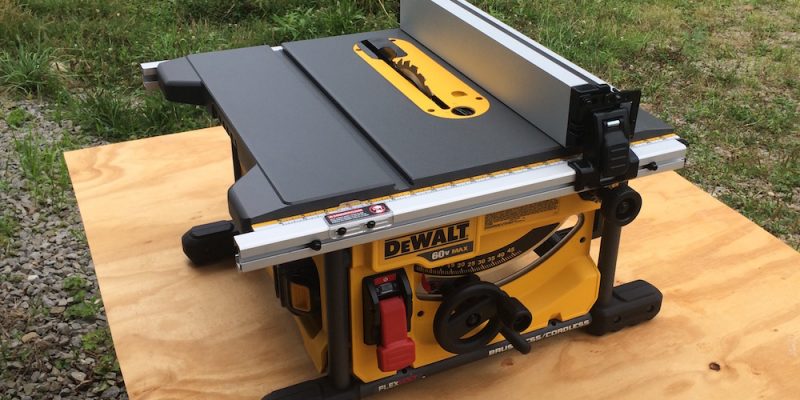 When DeWalt invited over 100 members of the tool press to Baltimore in late June of this year, we were treated to a full day of Tool Overload (if there can be such a thing)! There was a lot of cool and innovative stuff to see, but one of the major draws for a lot of us was the lineup of new 60V and 120V FlexVolt saws. Operating on the new FlexVolt batteries, the offerings include a circular saw, a reciprocating saw, a chop saw, a sliding miter saw, and a portable table saw. So we could see what life is like on the cutting edge, DeWalt style, DeWalt recently provided us with a portable 60V DeWalt FlexVolt Table Saw (Model DCS7485T1) to evaluate.

The DeWalt FlexVolt table saw is aimed at pro contractors and serious DIYers. Built with a beefy steel roll cage to protect it, the saw has all the features pros expect, including a powerful brushless motor, rack and pinion fence adjustment, fast and accurate blade adjustment, and the ability to handle full 4X8’ sheet goods.

Here are the specs from DeWalt:

So what the heck is “FlexVolt”? In case you just arrived from a galaxy far, far away, or you’ve just been released from solitary confinement, DeWalt announced its major new product line with quite a bit of fanfare at the DeWalt Experience product launch. The FlexVolt lineup is a revolutionary new system, consisting of new tools capable of operating on 60 or 120 volts of battery power, and a new line of accessories to most efficiently use that increased power.

The key ingredient in the mix is the FlexVolt battery. Capable of cranking out 60 volts, the engineers at DeWalt didn’t shaft the legions of users invested in the 20V MAX platform – they made the FlexVolt batteries backward compatible. In other words, you can slap a FlexVolt battery on any 20V MAX tool. Electronics in the battery will detect the tool type and adjust it to produce 20 volts, and you’ll get a whole lot more run time.

The mantra for all the major tool companies in the past few years has been “Cut the cord.” With the advent of brushless motors, and ever-improving Lithium Ion battery technology, there are more tools every year that finally are capable of doing just that – replacing corded tools on the job site. There are cordless drills, reciprocating and circular saws, and nail guns that are fully capable of serving as the primary use tool. But a table saw?

By their nature, table saws are reserved for the big cutting jobs: Cutting sheets of plywood or OSB, or ripping long pieces of trim or dimensional lumber. That kind of workload requires a pretty beefy motor, and a beefy motor requires a lot of juice to spin it. That’s an ambitious goal, but DeWalt, with its combination of a powerful brushless motor, and the new FlexVolt battery and efficient blades, seems to have achieved it in the DeWalt FlexVolt table saw. We took the saw to a couple of job sites, to put it to the test.

One of my ongoing projects is a total renovation of an old farmhouse. All the trim is ¾” thick oak, and while most of it is used at its full width, there is a fair amount of ripping involved, both for filler strips and in areas where a full-width piece won’t fit. One such area is around the kitchen windows, where I needed to trim about ¼” off the side pieces, and ½” off the top.

To fire up the DeWalt FlexVolt table saw, you just flip up the big red switch cover on the front, and press the green button underneath. To stop it, just press the big red cover, and a brake stops the blade in about two seconds. The saw starts quickly, and had no trouble ripping several pieces of the 1X4” oak, with no bogging down or stalling.

The saw cut very smoothly, and left a nice clean edge, with no splintering. The DeWalt FlexVolt table saw comes equipped with an 8-¼” FlexVolt blade (DWAFV3825) with 24 carbide teeth and an ultra-thin kerf. Other features, including slots and hook angle, are designed to enable faster, truer cuts, with less vibration and cutting force required. DeWalt has designed a whole line of FlexVolt blades, to maximize the performance of their FlexVolt tools – or any other tools, for that matter. They claim the efficient FlexVolt blades will let you get roughly twice as many cuts per battery charge as a standard blade.

Another current project is the renovation of an old apartment building. The apartment we’re working in now was totally trashed by the last tenants, who did a lot of damage to doors, walls, windows and trim, along with leaving the place unbelievably filthy. I put the DeWalt FlexVolt table saw to use on several projects there, including cutting 23” off the length of a 2’X4’ piece of MDF, ripping some 1X6” pine trim, ripping some MDF 1X6” trim, and ripping several pieces of laminate hardwood flooring.

The saw handled all its tasks with ease. One feature I really liked is the dust extraction port underneath the DeWalt FlexVolt table saw. The port is perfectly designed to accept a standard 2-½” shop vac hose. We slid in the end of a hose from a Ridgid vac, and it fit snugly and stayed right where it belonged. After a day of cutting all the various materials, there was almost no sawdust to clean up.

Normally, I’m a bit skeptical of table saw measuring scales. Just for giggles, I used the built-in measuring gauge on the DeWalt FlexVolt table saw. The rack-and-pinion setup moves the fence smoothly, and a lever locks it solidly in place when you hit your desired measurement. The rack-and-pinion system keeps the fence perfectly parallel to the blade, but in the spirit of “Trust but verify,” I checked the measurement on the guide against my tape. It was dead on, at both ends of the blade.

Depending on the material being cut, you should be able to get a fair bit of cutting done before a fresh battery is needed. Using the 6.0 Ah FlexVolt battery, DeWalt says the DeWalt FlexVolt table saw will rip 302 lineal feet of ¾” OSB; that’s almost 38 8’ sheets! A 9.0 Ah battery, due out in early 2017, should increase the work capacity by 50%.

Who is the new DeWalt FlexVolt table saw likely to appeal to? First off, anyone who is looking for a high-quality, rugged portable table saw. Convenience aside, this saw is very well designed and made, and has a slew of features that make it a pleasure to use. Many of the adjustments are fast and tool-free, and the tools and accessories that are needed, like the blade wrench and the push stick, stow securely and conveniently onboard.

Getting access to the blade compartment is fast and easy; just turn a knob and the throat plate pops right out. The flip-over rack and pinion fence is solid and accurate, and the brushless motor is smooth and powerful.

The DeWalt FlexVolt table saw has beefy rubber feet that keep it very stable, and there are other small touches that show DeWalt’s attention to detail in the saw’s design. For instance, if you raise the two sides of the blade guard, they stay up and out of the way, but are easy to drop back down into “finger saver” position. There’s a built-in spot for all the “extras” under the saw, so they’ll be easy to find next time you need them. Assuming you put them away, of course, which you always do – right?

Many of these features can be found on a corded portable table saw, such as the DeWalt DWE7480XA, at a lower price. So who needs a cordless portable unit like the DeWalt FlexVolt table saw? Ask any contractor who’s been on a job site, competing with the other trades for set-up space and power. Or the guy who gets handed the punch list of 14 items, from three job sites, that have to be fixed RIGHT NOW! The premium is also likely to be worth it for those who sometimes work in remote locations, or who like maximum flexibility and convenience.

I was very impressed by the DeWalt FlexVolt table saw. The saw is very robustly constructed, and should hold up well on the job site. It has plenty of power, it’s well laid out, and everything operates very smoothly. At 48 pounds, it’s lighter and easier to schlep around than some miter saws. If you want an easier way to transport it, along with a ready-to-go work stand, the saw is compatible with the DeWalt DW7440RS Rolling Saw Stand, among others.

As a further incentive, the saw kit comes with a fast charger and a 6.0 Ah FlexVolt battery, which you can slap on any 20V MAX DeWalt tool you want to get a LOT of work out of. It can also be purchased as a bare tool.

The DeWalt FlexVolt table saw just looks and feels like a quality tool. DeWalt backs that up with a three year limited warranty, one year of free service, and a 90-day money-back guarantee. If you’re ready to cut the cord/experience life on the cutting edge (please choose one cliché), rip on over to your local Home Depot and check one out.