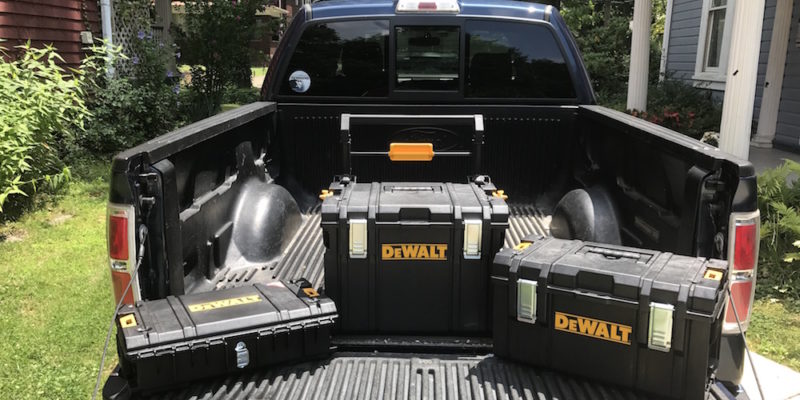 This post is sponsored by The Home Depot. If you are unfortunate enough to be as disorganized as I am, you spend as much time searching for tools and supplies as you do using them. Over the years, I’ve tried to rectify this unfortunate trait and become better organized, with varying degrees of success. Recently, a new line of tool boxes and storage containers was introduced by the folks who bleed Yellow and Black – and I don’t mean the Pittsburgh Steelers. The Home Depot sent us a few models of these new DeWalt ToughSystem Tool Boxes, so we could see how they stack up.

The Nitty Gritty Of The DeWalt ToughSystem Tool Boxes

Job sites aren’t often pristine environments. Dust, mud, rain, and the occasional falling 2X4 or hammer are just a few of the hazards trying to destroy your expensive tools. DeWalt knows that, and tackled the problem by including an integrated water seal around the perimeter of the lids, earning the DeWalt ToughSystem tool boxes an IP65 rating.

For longer life and more secure closing, DeWalt used corrosion-resistant metal latches. In a nod to the reality of working in tough conditions, they attached the latches with screws, rather than rivets. This way, you’re covered if the new guy mangles the latch by opening it with a claw hammer. There’s also a metal reinforcing rod running through the hinges.

Many tools aren’t particularly lightweight, and the various cases in the lineup of DeWalt ToughSystem tool boxes were designed to make them easier to schlep around. In addition to a top handle, the cases each have a robust, comfortable handle on either side. The handles are slightly spring-loaded, so they snap down out of the way when you set them down, rather than sticking out to snag your tool belt.

We’ll start with the smallest box. Small, in this case, is a relative term – the DeWalt DS130 measures a roomy 6” x 13” x 22”. Inside, six plastic inserts are included, to help you get organized. Two of them are drop-down parts organizers that tuck up into the lid, and there are four large cups, two on either side. All the compartments are easily removable, so you can dial in the right combination of tool and accessory storage.

I actually encountered the smallest of the DeWalt ToughSystem tool boxes a few weeks ago, when we reviewed the DeWalt 20V MAX brushless combo kit. The drill driver / impact driver kit comes in a DeWalt DS130 case, and my first impression of the kit was how beefy the storage case was. It has the lid storage compartments but not the larger cups, and easily accommodated both drills, the two batteries, auxiliary handle, and charger, with room left for some supplies. Hopefully, this will become the standard storage case for future kits from DeWalt.

I loaded up the new DS130 a couple of ways. I first piled in a variety of construction screws and other fasteners, driver bits and drill bits. The cups that come with the case are perfectly sized to hold two one-pound boxes of screws, a handy feature. I then removed some components from batch one, and added an impact driver. There was plenty of room for the driver, along with enough drivers and fasteners to tackle pretty much any job.

The DeWalt DS130 ToughSystem box would be a great choice for organizing a variety of fasteners or accessories. I think option two is even more useful, allowing you to bring a drill/driver, bits and all your fasteners in one easy container.

My only quibble with the case was that when it arrived, one of the attachment brackets for the left-side drop-down accessory container was broken off. The container still worked, and stayed in place in the lid pretty well due to its friction fit, but it’s concerning that a new box would arrive with a defect, even a minor one. Overall, the DeWalt ToughSystem tool boxes seem very robust. I’m a fairly big guy – in the mountain biking community, I’m relegated to what’s impolitely called the Clydesdale class – and I stood on each of the DeWalt ToughSystem tool boxes, with no ill effect. Not that YOU would ever stand on your tool box…

I’m guessing the broken attachment point was just a defect that DeWalt’s QC folks didn’t catch, otherwise I’m sure they wouldn’t have let it out the door. In any case, the boxes have a lifetime warranty, and a 90-day return policy, so although it’s a minor hassle, DeWalt and the Home Depot will make it right.

Let’s Step It Up A Notch

Next up in our trifecta of DeWalt ToughSystem tool boxes is the DeWalt DS300. Coming in at roughly 12” x 13” x 22”, the DS300 can swallow up to 88 pounds of your “stuff.” A removable storage tray sits above the big compartment, for easy access to smaller items and accessories.

The DeWalt DS300 would be a good way to store and transport a bunch of tools that are frequently used together. It would hold a heapin’ helping of electrical or carpentry tools and supplies, plumbing gear, or mechanic’s tools. I put a largish portable planer and all its attachments, along with a good-sized cordless screw gun, and still had a fair bit of room left in the bottom. The top tray is fairly deep, and easily held an assortment of drill and driver bits and a box of screws.

After the loading and unloading, I decided that the DeWalt DS300 is going to be the new permanent home for the portable planer. I’ll also use it to keep a couple of hand planes, my hinge mortising templates, door lock installation kit, a self-centering bit set, and other door-related gear happily together. Hey – I’m getting organized!

Got big stuff to schlep? I do. Circular saws, reciprocating saws, big honking angle drills, or even just a bunch of smaller stuff. Rather than piling it in milk crates, or tossing it in a jumble in the back seat of my truck, I can pack a bunch of it into the DeWalt DS450. The only one of the DeWalt ToughSystem tool boxes with wheels, the DS450 provides an easy way to lug a lot of big, heavy stuff. As a bonus, it’s willing to carry a few of its brother boxes on its back.

The wheels on the DeWalt DS450 are 7” in diameter, and are attached to a solid-steel axle. They roll smoothly, and had no trouble bumping up and down concrete and wooden steps. The telescoping handle has rectangular metal sides and a comfortable, rounded-off plastic hand grip area. The extendable handle locks in the fully collapsed and fully extended positions, and is released by pressing a paddle lever on a rod running between the two uprights. A nice design touch is that when you open the lid, the handles actually tilt back out of the way, so the box can open fully.

The largest of the DeWalt ToughSystem tool boxes, the DS450 has a LOT of space. I tucked in a very large stud and joist drill, the large screw gun, an impact driver, and a hammer drill, all with batteries, which I’ve discovered makes them more useful. I added a charger, a large set of screwdrivers, a 6” hole saw, and a 3-5/8” self-feed bit, and still had a fair bit of room to spare. The removable tray had several drill and driver bits, a hole saw, a tape measure, and a set of self-centering bits, and could have accommodated a bit more.

With its wheels and telescoping handle, and the ability to latch onto a few other DeWalt ToughSystem tool boxes, the DeWalt DS450 makes it easy to bring ALL your tools onto the job site at once – without breaking your back, or dropping any into a puddle.

How Many DeWalt ToughSystem Tool Boxes Do YOU Need To Get Organized?!

Although we only checked out three of the DeWalt ToughSystem tool boxes, there are many other products in the ToughSystem lineup. A workshop racking system lets you keep everything neat and secure on a wall rack. There are totes and parts organizers to help you get de-cluttered, and a carrier capable of handling any ToughSystem box. There’s even a ToughSystem music center, that can stream from any Bluetooth device or play its own radio, with a built-in charger capable of charging any 12V or 20V MAX DeWalt battery!

If you need help getting organized, whether in your home workshop or out there getting your daily dose of fun on the job site, check out the lineup of DeWalt ToughSystem tool boxes. Their modular design makes it easy to store them out of the way, or to drag a whole stack of them with you to work. They’re reasonably priced, and they’ll keep your tools and accessories collected and protected.

The variety of ToughSystem boxes means you’ll be able to find some just the right size to accommodate whatever combination of tools and accessories works for you. The 90-day return policy gives you a perfect opportunity to see how they can help organize YOUR world, and the limited lifetime warranty guarantees you it’ll stay that way. 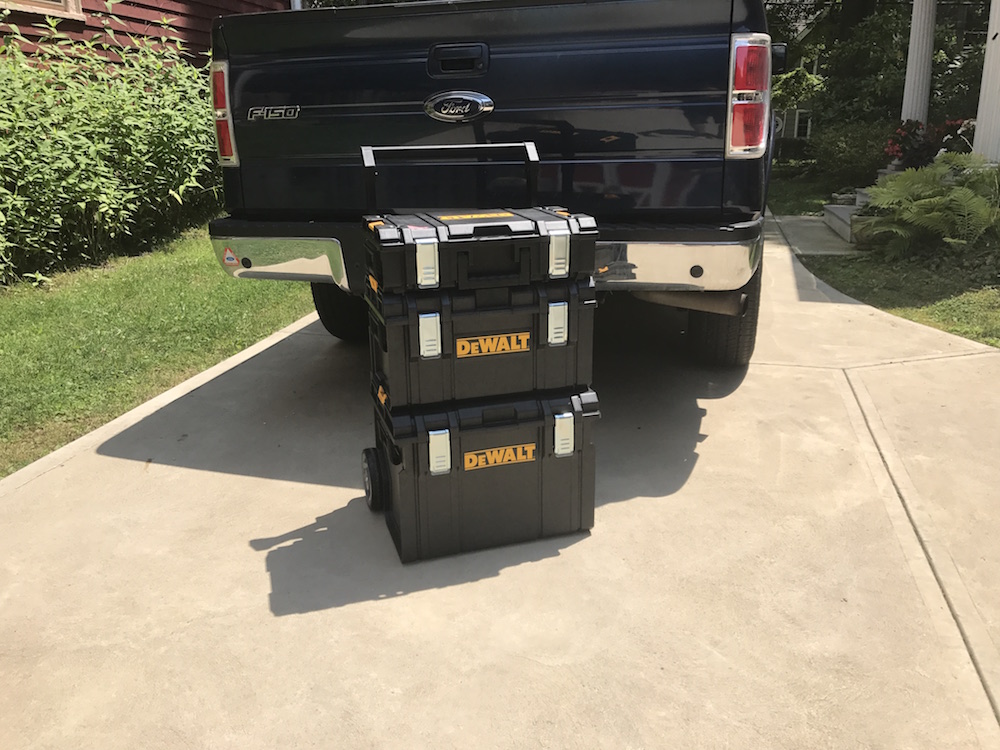 DeWalt ToughSystem is available in a variety of sizes and price points: