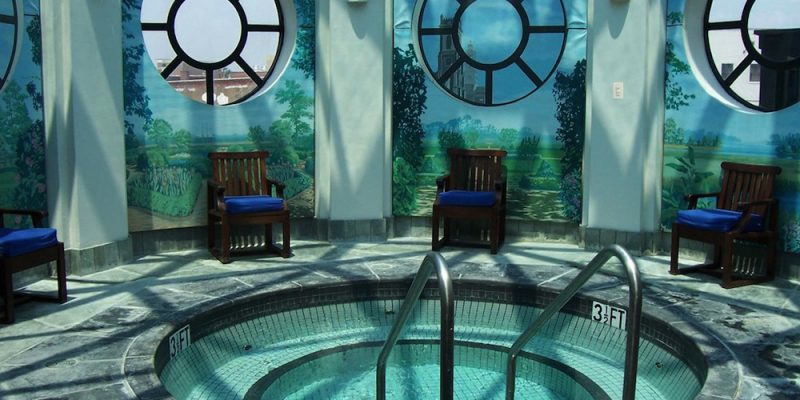 Does your bathroom suffer from wet walls, damp dentures, misty mirrors, or other alliterative issues? You probably know that, unless you have a sauna (that is NOT my setup pictured above—it’s the DewStop dream spa, I believe), excess moisture in the air in your home is a bad, bad thing. Too much moisture can get you a bumper crop of mold, mildew, and other organisms that don’t do much to enhance your home’s appearance—or your health.

One of the most moisture-prone rooms, as you might expect, is the bathroom. With a toilet, a sink, and a tub or shower, the bathroom is all about bringing in the H2O. And that’s great, as most of it exits through the drains in those fixtures. But when you shower, or take a leisurely bath whilst reading a literary classic, munching bon-bons, and sipping a fine Bordeaux after work, you’re adding a lot of humidity to the air. Hopefully, you already have a good exhaust fan in your bathroom—something sized correctly to suck the humidity produced by all that water right out of the room. If not, that will have to be your first step; the Dew Stop switch can detect moisture, but you need a good fan to get it out.

Unfortunately, most bathroom fans only get used while you’re showering or bathing, and maybe for a few minutes after while you’re toweling off. (Hopefully, it also gets some action when you’re planted on the throne after consuming that heaping plate of El Guapo bean burritos). The thing is, it can actually take a while longer to clear the humidity from the room; researchers for fan manufacturer Broan recommend you run the fan for at least 20 minutes after shutting the water off. This also helps to ensure that moisture and condensation in the fan body or ducting is minimized. If you just shower and shut the fan off when you leave the room, there can be quite a bit of moisture left in the air, and that moisture will settle on the various surfaces in your bathroom. Think about how many showers you take in a year, multiply that by the number of bathers in your household, and you’ll see there’s the potential for quite a bit of residual dampness.

So no biggie, right? Just let the fan keep running for 20 minutes, shut it off, and get on with your life. Assuming your attention span is similar to mine, though, and that nine times out of ten you’ll forget to come back and turn the fan off in 20 minutes, there are a couple of ways to make sure the humidity gets the heave-ho. One way is to install a timer switch; we have one in our master bathroom. It has preset buttons for six run times, ranging from one to sixty minutes. This is an improvement over the on/off switch, as we can set it for however long we think is appropriate. I usually set it for 30 minutes while showering, which means it runs for about 20 minutes after I get out, and I can go away and not worry about it. (60 minutes is the burrito setting). This will PROBABLY get all the humidity out, but maybe it should be running 30 minutes longer—there’s no way to tell.

That’s what the folks at DewStop had in mind when they came up with their line of humidity-sensing fan switches. Designed to fit into a standard electrical device box, the DewStop switches contain a humidity sensor. When it senses there is enough moisture in the air to start settling on any surface, it turns the exhaust fan on, and keeps it on for 30 minutes, or until it senses the humidity is gone.

DewStop provided us with two switches to evaluate—one to control both a light and a fan, and one for a fan only. I installed the fan-only switch into a box with separate fan and light switches. (I could have used the fan/light combo switch, but would have ended up with an empty space in the box). The installation is simple, and excellent instructions are provided with the switch, along with a video on the DewStop website. You simply remove the existing switch and replace it with the DewStop switch; it takes about ten minutes.

Make sure power is off to the switch; flip the breaker and test it with your non-contact voltage tester. The back of the switch has protruding wires for making your connections; they’re clearly labeled. Just connect the green to your ground, white to the neutral, black to the hot in (check this with your tester if needed), and red to the hot out to the fan. All necessary connectors and screws are provided, and the wires are even pre-stripped. Due to the magical humidity-sensing circuitry inside, the switch is fairly deep; if you have a shallow box, or a huge tangle of wires, installation may be complicated.

After all your connections are made, install a new cover plate. DewStop provides one that will work if you’re replacing a single switch; otherwise, you may have to buy one to conform to whatever convoluted configuration you have. I got one at Lowe’s for about a buck. Flip the power on, and test the switch by pressing the top button; the fan should start up. Press the bottom button to shut it off. You can use these same buttons at any time to manually start or stop the fan. You can test the moisture sensor by blowing into it like you’re trying to fog a mirror; it should kick the fan on after a few seconds. Or you can take a shower!

That’s what we did. Over the next several days after installation, we showered without turning the fan on. Depending on the force of the water, and how hot it was, the fan would kick on after the shower had been on for roughly 5-8 minutes. In every case, it came on just as the first traces of condensation were beginning to appear at the top of the mirror.

After exiting the shower, the fan continued to run for roughly half an hour. The surface of the mirror was totally clean, and there was no feeling of dampness on any of the walls or ceiling. The switch appears to be well made, comes with a 30 day money-back guarantee, and is available in white or light almond. It got pretty good reviews on Amazon, and most of the buyers who did have an issue said the customer service was excellent. They even replaced two switches for a customer whose switches were fried by a lightning strike!

Because the DewStop only comes on when it’s needed and stops after 30 minutes (which is good for those of us who suffer from an abundance of senior moments), it can help you save on your energy costs. According to the DewStop folks, the sensor needs no maintenance and provides a lifetime of use—although the warranty is only good for the first year of that lifetime. So if you want to keep the condensation off your contraceptives and the humidity off of your hairbands, procure yourself a DewStop. The DewStop Humidity Sensing fan control is available for $31 for the fan-only version or $41 for the model that controls both the fan and light: 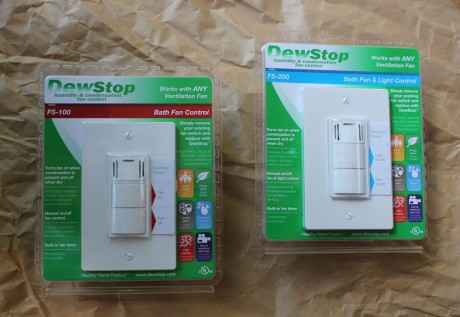