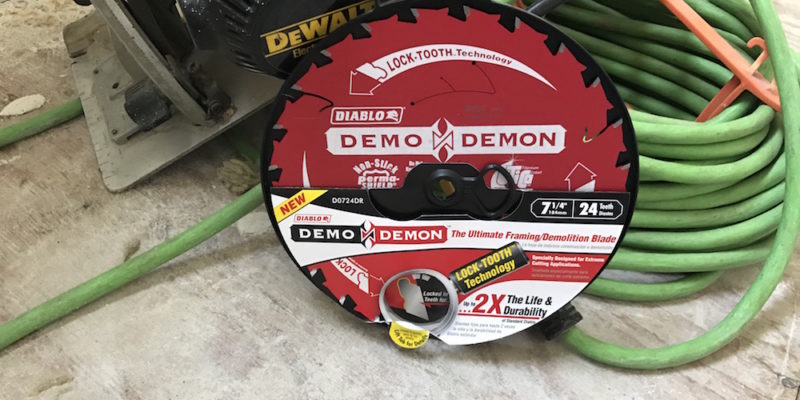 This post is sponsored by The Home Depot. Along with a trusty hammer, a reliable circular saw with a good blade is one of the framer’s staple tools. For a remodeler or renovator, doing a bit of demo work before the building begins, having the right blade is even more crucial. A “bargain” blade will be gummed up and toothless before you can say “Guess how much I saved on this bad boy?!” In demo work, it’s only a matter of time before you hit a nail or a pipe or some wiring (hopefully disconnected) – or a subfloor, or a whole roof full of shingles. The Diablo Demo Demon 7-1/4” Saw Blades claim extreme impact resistance and durability in extreme projects; the Home Depot provided one for this sponsored post, so we could see what they could saw.

The Diablo Demo Demon is made by Freud, and their engineers did everything they could think of to beef this blade up. They started with a laser-cut thin kerf blade, and gave it a Perma-Shield non-stick coating. This combination cuts way down on the blade’s resistance. This is great for any saw, but especially useful for anyone using a cordless saw. A proprietary blend of carbide, made from titanium and cobalt, is used for the business portion of the blade. Here’s a list of the specs and features from Freud, followed by a video of them giving the blade a wee workout…

Although we just received the Diablo Demo Demon to evaluate, I first used one a couple of years ago, during a kitchen floor remodel. I cut out two layers of linoleum, a layer of luan with roughly six billion staples, and an area of ¾” tongue-and-groove subfloor that had some water damage. One blade got the job done, without gumming up, and still had plenty of life left in it when the job was done.

One of Freud’s claims regarding the Diablo Demo Demon is its ability to cut through embedded nails. To prepare for its initial trial, I fired up my framing nailer, and launched a strip of 25 16-penny nails into the edge of a 2×4 roughly four feet long. I mounted the Diablo Demo Demon blade on my corded DeWalt circular saw, plunged in, and let ‘er rip (don’t try this at home kids)! The saw sliced through the wood, and all 25 nails, without slowing at all. Then the moment of truth: Checking the blade showed that all 24 teeth were still firmly attached, with nary a nick – and no new cavities!

I decided that was way too easy, and a bit of further testing was in order. Since the Demo Demon is also billed as a framing blade, and it was all warmed up, I introduced it to a piece of 2×12” LVL left over from a header project. The thin kerf of the Diablo Demo Demon helped it slice quickly through the beam.

The thin kerf on the Diablo Demo Demon is also billed as being a boon to users of cordless saws. This makes sense, as the decreased resistance should help increase power and extend battery life. We recently received a new cordless Makita XSR01 to evaluate, so I slapped the Diablo on it and got ready to make some more sparks. Note: The Makita is a rear-handled saw with the blade on the left, so the blade gets installed backwards to how it would be on a standard circular saw. We’ll be doing a detailed review on the Makita soon.

For this challenge, I fired 25 more 16P framing nails into the end of a 2×8, and drew four cut lines. I fired up the Makita and dove in. Sparks did fly, but the Diablo Demo Demon glided through all four passes, totaling another 100 nail dissections, with no problem. Once again, all the teeth were intact when the fun was over.

After the Diablo Demo Demon was finished with its nail and LVL appetizer, it was time to change it up a bit. I wanted to see how it would do munching on some shingles. My wife stubbornly refused to let me cut a hole in our roof, so I fabricated a small simulated roof section. I put down two layers of ½” plywood, and topped it off with three rows of asphalt shingles.

The blade was still on the Makita, so I used it to cut a few passes down the length of my mini roof. The Diablo Demo Demon tore quickly through it all, with nary a word of complaint. The saw didn’t bog down at all, and although there was a little bit of blackened asphalt residue on the blade, the teeth were clear and ready for whatever was next.

I was impressed with the way the Diablo Demo Demon plowed through a variety of construction materials, including a large LVL beam and 125 16-penny nails. It would make a great addition to the wrecking bar, Sawzall and sledge in the demo tool arsenal. It also serves as a great all-around framing blade, and due to the quality of its construction, it should hold up for a good long while.

In a couple of months, we’ll be tearing down our old collapsing barn, and replacing it with a sweet new workshop – Woohoo! There will be a lot of demo going on, as we cut up the old roof, including any shingles that haven’t blown off in the meantime. I also plan to try to salvage as much of the interior floorboards and framing as possible. I plan to pick up a couple of extra Diablo Demo Demon blades, and invite some friends over for a slice-and-dice party.

To give you a chance to see just how much destruction you’re capable of, the Diablo Demo Demon is covered by the Home Depot’s 90-day return policy. At the time this is being written, Home Depot has a 2-for-1 trial offer underway. It’s a limited time offer, while supplies last (in-store and online). Put one to work demoing YOUR inner demons! 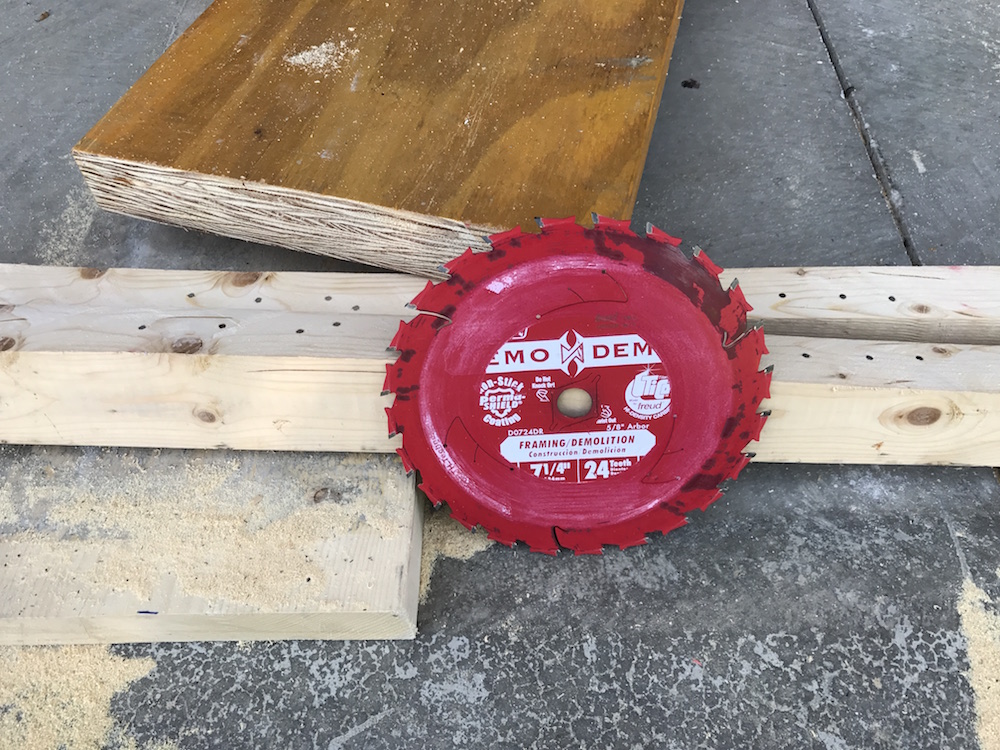