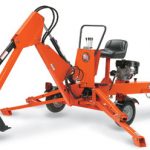 When we find neat products, we strive to think of how the average person would look at them and use them in their lives. Many of the readers of HomeFixated live in a city, so finding a real reason why most of you would be truly interested in the DR Towable Backhoe was a bit of a challenge – until I suddenly realized something:

I’m not kidding – at the time this little review is being published (in SEPTEMBER), the King of Pop (who died in JUNE) is still intact, above ground and probably on ice next to Walt Disney.

I could go for the obvious joke and mention something about certain scenes from the “Thriller” video, but instead we’re going to try to put the powers of social media toward good – and get this man buried.

With the DR Towable Backhoe – any of us could get the job done, making CNN’s coverage of MJ that much closer to wrapping up (please). Seeing as one Dr (allegedly) killed him, it’s only fitting that another DR literally puts him in the grave.

This little backhoe can be moved wherever you need via car or ATV, has a self-powered hydraulic system, a tight stabilizing design and has a high-powered engine – in fact, it has the “first air-cooled engine in the world to use auto-style chain-driven overhead cam technology.” Uh – yay! That sounds good, right? And of course, it digs like no other, even in a tight spot (like under a tree) thanks to its exceptionally flexible joints. Not sure? There’s a video with down-home music that shows you the DR Towable Backhoe in action (doing non-funeral related stuff like digging holes for trees, finding broken water mains or moving dirt, debris and rocks)!

So, the challenge is this: Which HomeFixated reader is willing to plunk down $5249 for the DR Towable Backhoe, hitch it to their car and head over to Neverland? Anyone? Any takers? Any heroes out there?