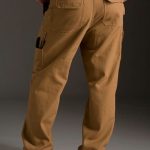 Did you know that Duluth Trading’s world famous Fire Hose Work Pants can actually save your life? It’s true. Or at least that’s what one of their customers said. Brian F of Meridian Texas wrote to Duluth Trading to let them know he was recently run down by a 644 pound wild boar. “My doctor said if not for these pants, the tusk would have torn through my femoral artery.” I’m no doctor, but I’m pretty sure a torn femoral artery ranks pretty high in the “bad wounds to get” department. Duluth is quick to point out these are pants, not body armor or safety gear. But with stories like this, we could see where people might get confused.

If you need more visuals to get a feel for the wild boar story, here’s a little promo Duluth cooked up:

Duluth sent us a pair of Fire Hose Work Pants to review. A little disclaimer here, I did not jump in front of a moving car, fling myself into the local zoo’s polar bear enclosure, or have any wild boar run-ins. Instead, I wore the pants doing more mundane activities known as “home improvement.” Most of this involved cramming tools into pockets, bumping into stuff, crawling around in awkward spaces, etc.

Do you like pockets? I sure do. And thankfully, Duluth loaded the Fire Hose Work Pants full of them. Not only are there a lot of pockets, the pockets are also really roomy. I was tempted to toss my cordless driver into the upper pocket, but decided to resist due to the inevitable snide comments my wife would make about the resulting appearance. The two main side cargo pockets even have a flap that not only tucks out of the way when needed, but does so securely with some additional velcro cleverly hidden inside the pocket. That’s handy when you need to get in and out of your pockets repeatedly and don’t want the flap in your way.

The most conspicuous feature of the Fire Hose Work Pants is the fire hose material they’re made out of. We’ve already covered wild boar resistance, but it’s worth repeating that the material is beefy. It’s 10.9 oz cotton canvas, but surprisingly broken-in for material so tough. Despite many abrasions from various home improvement activities, the pants showed zero signs of real wear. They’re tough! Do keep in mind that since the material is thick, these may not be pants you’ll want to wear for a mid-August roofing job in Phoenix Arizona. Duluth thoughtfully makes a mid-weight version of the pants for those looking for something a little lighter and cooler. Oh, and there’s a version for women too!

Most people reviewing the pants online found sizing to be pretty much as described. I found them to be a tad small, so I opted for an extra inch for the waistline. I like my pants to have a little, err, room in them, so the sizing thing may just be my own peculiarity. If you like your pants tight like a mid-1980’s heavy-metal lead singer, definitely don’t size up.

Although I love the Fire Hose Work Pants, one thing was conspicuously absent; a hammer loop or two. These pants are practically a tool belt to begin with, so I’m not quite sure why there isn’t a more sizable loop on them (there are two small loops useful for tape measurers or smaller clip-in items, but they’re not big enough to toss a hammer on). On the plus side, a wild boar tusk is less likely to get snagged on your pants without a protruding hammer loop on it.

Check out the Duluth Trading Fire Hose Work Pants, available in five different colors, for about $45 a pair.