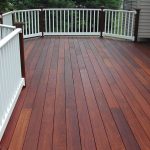 EB-TY isn’t the only company making hidden deck fasteners, but in my opinion it’s one of the best. I recently had two decks under construction here and wanted a way to fasten 2×6″ boards to large beams that support the decks. I looked at several different options including the Grabber Deckmaster, Dec-Klip, and a bracket system from Simpson, among others. Ultimately I settled on Eb-Ty, and I am glad I did. Eb-Ty sent their largest fastening system, the EBE002 for the 2×6″ material we were using. Eb-Ty also makes several other specialized systems including the EBE004 (for 3/4″ and 5/4″ boards), EBE005 (for materials that expand more), EBE006 (for 11/16″ and 3/4″ boards with expansion), and EBE007 (also for 11/16″ and 3/4″ boards). The 002 kit came with Swan Secure Stainless square drive screws. With razor sharp points, we found these didn’t even require pre-drilling in our application. In fact, they went right through copper beam caps and into the beam below, all at a 45 degree angle. We also deviated a little from Eb-Ty’s recommendations in that we did not use construction adhesive. I just didn’t see the need to try and glue the wood to the copper caps. As far as I can tell, the only disadvantage is some very slight squeaking. While Eb-Ty’s hidden deck fasteners require substantially more effort than just nailing or surface screwing, I think they are well worth the effort. The end result is a deck with no visible fasteners (although we did screw and plug a board at the start and end of the deck). You can get an idea of the very clean look from the Eb-Ty gallery pic in this review. Since our decks are on the second story and visible from below, Eb-Ty allowed for a super clean install from all angles, not just the top. The Eb-Ty fasteners also provided extremely consistent deck spacing due to their built-in spacer function. The end result is a solid deck, with an elegant look, unmarred by unsightly fasteners. It’s enough to make an anal-retentive perfectionist glow with pride! Since there are no surface nails or screws, the deck is also safer to walk on, and should have less water penetration without any holes on the exposed surface. If you’re willing to spend a little extra time with a biscuit joiner, I highly recommend Eb-Ty’s product line. Some decking material even comes pre-grooved, which makes Eb-Ty a complete no-brainer to install. You can get the Eb Ty Original 100-Piece kit