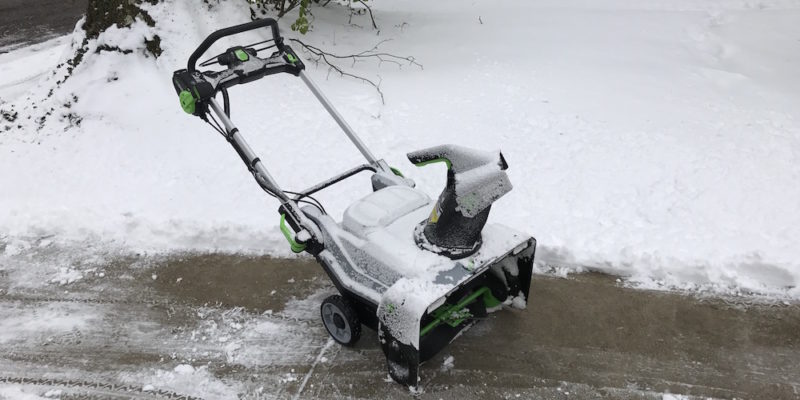 I grew up south of Buffalo, NY, an area euphemistically called the “persistent snow band.” That’s weather-speak for “snow dump central.” Back in the day, we never owned a snow blower; hell, there were six of us kids, and a couple of snow shovels. Why would you need a snow blower?! Now I’m all grown up (opinions may differ) and living in Pittsburgh, and while we don’t get nearly the amount of snow they do in Buffalo, we still have to deal with it from time to time. Since our kids thoughtlessly moved out, and refuse to come back to shovel, I am once again the designated snow removal technician. That job just got a whole lot easier, when the folks at EGO sent along their EGO SNT2102 Snow Blower for us to evaluate.

I had thought about buying a snow blower in the past. Most of this contemplation took place in the aftermath of a blizzard, with a bottle of Aleve and a heating pad close at hand. Most gas-powered snow blowers are fairly heavy and complicated, and take up a good bit of storage space – all year ‘round. Given the limited use it would get here, I could never justify the purchase. I didn’t really consider a battery-powered unit, thinking they’d be flimsy and underpowered.

After the EGO SNT2102 Snow Blower arrived, and I unboxed it, my opinion changed. Although the unit is relatively lightweight, in comparison with a gas-powered model, it seems to be very solid and sturdily built. EGO’s use of a brushless motor adds to the blower’s power, and ensures it should operate without maintenance for a good long while. I love that there’s no gas or oil to mess with, no choke, no starter cord to yank, and no fumes. After each use, and at the end of the season, it folds up fairly compactly. It will fit easily under the workbench in our shed, or I can grab a helper and schlep it into the basement, out of the way. Here is the feature list, and a short promo video from EGO:

Assembling the EGO SNT2102 was so simple, even someone with brain freeze could do it. Remove the unit from the box, unfold the handle, and lock it in place with the two side levers. Unscrew the two Allen bolts from the top, put the chute in position, and replace the bolts. Slap in a battery or two, and you’re ready to throw some snow! Total assembly time was under five minutes.

The batteries arrived partially charged, and it only took about 20 minutes each to top them off. To install them on the snow blower, just lift the battery compartment lid, and slide the batteries in until they beg for mercy, or you hear a click, whichever comes first. They fit well and go in easily. When they’re fully drained, the rapid charger will have them topped off and ready to go out and play again after 40 minutes each. That’s pretty fast for such a big honkin’ battery.

Operating the EGO SNT2102 Snow Blower is even easier than setting it up. No manual perusal was required, although naturally I spent some quality time with it later, to read the 4,700 safety warnings. (To summarize, don’t stick your hand into the spinning auger, and don’t drive the unit through your rock garden). To get the auger spinning, just follow the little pictograms on the handle: Depress the safety button, then pull back on the bar, similar to most lawnmowers. To stop the unit, let go of the bar. Easy peasy. The unit starts quickly, and is very quiet.

The other controls are equally straightforward. There’s a throttle, so you can adjust how fast the auger spins. A pair of bright LED headlights is controlled by a push-button switch next to the battery compartment, for those O-dark-hundred snow-blowing extravaganzas. To control the direction of your ejected snow up to 180 degrees from side to side, pull the lever on the right side of the handle back to aim right, push it forward to shoot it to the left. There’s also a handle on the chute, which can be raised or lowered to control how far the snow is thrown. The specs claim the EGO SNT2102 Snow Blower will relocate your snow up to 35’ away.

In keeping with Murphy’s Law, a moratorium on snowfall apparently began the same day the EGO SNT2102 arrived. It sat in its largish box in our living room for a couple of weeks, at which point my wife strongly urged me to relocate it. Over the next few weeks, we got a trace of snow every so often, but nothing worthy of testing the EGO. I was about ready to start digging out my summer wardrobe, when finally in February we got a dusting of the white stuff. Figuring I had to take what I could get, I went out to tackle it.

Our concrete driveway is just under 100’ long, with an extra parking pad near the end. We also have a sidewalk across the front of our property, about 80’ long, and a short sidewalk from our front porch to the street. I fired up the EGO SNT2102 Snow Blower, and had the whole shebang cleared in about fifteen minutes. The snow was not very deep, ranging from less than an inch to maybe 1-½” at most, over a lovely sheet of ice. The EGO zipped through it in a flurry, leaving the surfaces nicely cleared.

About three weeks after that pathetic taste of white, we got a bit more snow – closer to 4”. Still nothing a Buffalonian would even notice, but a chance to give the EGO at least a LITTLE more of a challenge. I pulled it out of the shed, and cleared our driveway and sidewalks, along with the walks in front of the next two houses. The EGO SNT2102 Snow Blower did an excellent job clearing everything, right down to the concrete, and did it all on one battery.

Update, March 2018:
The moratorium on snow did not extend through the 2017-18 winter season; the EGO earned its keep during several winter storms. Then, on the first two days of spring, we got a little bonus snow dump of about 6”. Welcome to springtime in the ‘Burgh! Naturally, it was the wet, heavy stuff of which heart attacks are made…I dragged the EGO snow blower out of its cozy corner in the shed for (hopefully) its season finale.

I worked my way up and down the driveway, until I had it all cleared. Did I mention the snow was wet and heavy? Despite that, the EGO snow blower did a great job clearing everything, right down to the concrete. At times, I’d have to back it up a foot and surge forward, but it never jammed. After finishing the driveway, I cleared our front sidewalk, two neighbor’s sidewalks, and part of a neighbor’s driveway that had already been started. She was very impressed, and took some pictures of it to give to her husband, along with instructions to go fetch one.

After all the snow clearing, the EGO was still rarin’ to go. Unlike me. My back was aching just from shoveling off the porches, and to clear space to get the shed doors open. Did I mention the snow was wet and heavy?! Anyhow, the EGO snow blower saved the day; if I’d had to clear the driveway and sidewalks by hand, I’d still be out there. Or in a back brace. The EGO has once again been stowed in the shed, but I left it just inside the doors. Spring isn’t over yet.

Got The White Stuff?

Before the EGO SNT2102 Snow Blower arrived, I was a bit skeptical. A lightweight, battery-powered snow blower? How good could it be? Pretty darn good, it turns out. The main unit is actually constructed of a combination of steel and composite, and is very sturdy and well-made. The EGO is capable of clearing a fair bit of the accumulated white stuff. It’s easy and intuitive to assemble and operate, and takes up relatively little storage space. It’s also much easier to get into operation than a gas-powered unit, with the added advantage of being quieter and less smelly.

The EGO SNT2102 Snow Blower is available in a few different configurations. The evaluation unit we received came with two 5.0 Ah batteries and a rapid charger. It’s also available as a bare tool, so if you already have an EGO charger and a couple of batteries, you can save around $200. (EGO recommends using batteries with a capacity of at least 4.0 Ah). If you have a big driveway, or want to be the hit of your ‘hood, there’s also a version that comes with two 7.5 Ah batteries, so you’ll never have to stop.

The EGO has excellent reviews from buyers on the Home Depot site, with over 96% recommending it. The folks at EGO are confident their snow blower will hold up well; the EGO SNT2102 is backed by a 90-day money-back guarantee, a five-year warranty on the snow blower, and a three-year warranty on the batteries. Next time AccuWeather starts foaming at the mouth and talking about Snowmageddon, put the shovel back in the shed, and the Aleve back in the medicine cabinet, and let your EGO take over!

Buy the bare tool from the Home Depot for around $399: