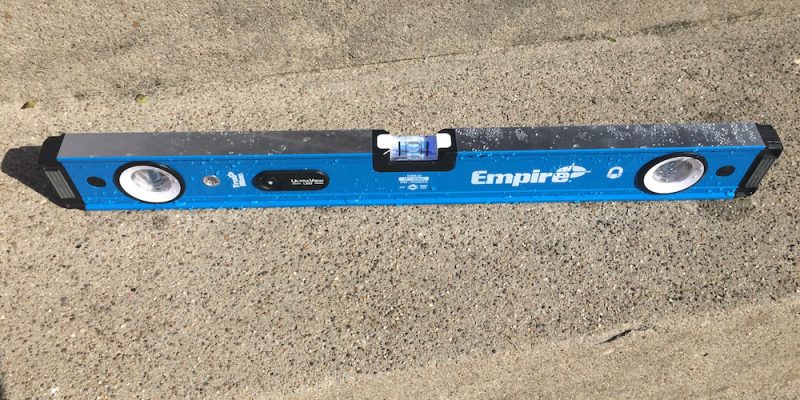 If you work in any of the trades, there are times when you need to make sure something you do is level and/or plumb. I know, picky picky…Still, for carpenters, plumbers, masons, and cabinet installers who don’t like callbacks, or DIYers who don’t like to listen to “constructive criticism” from their significant other, doing the job right the first time is important. Unfortunately, that work isn’t always being done in ideal conditions, and due to poor lighting – or crappy eyesight – sometimes it’s not easy to see where the #$!* that tiny bubble is. We recently received both a 2’ and a 4’ Empire UltraView Level to evaluate – they both promise to make that task a WHOLE lot easier.

We got a chance to see an assortment of Empire’s product lines at the Milwaukee New Product Symposium in June of this year. Milwaukee acquired Empire Level, which is also based in Wisconsin, two years ago. Since then, they’ve invested a lot of time, money and talent in revitalizing the company, launching over 100 new product SKU’s this year alone. Their focus, as with the Milwaukee brand, is on quality, durability and innovation, while providing the features most useful to the end users.

And the Empire UltraView Level lineup has a LOT of useful features. The most obvious one is visibility. The levels are constructed with an ultraviolet LED on either side of the vial. When the vial is being molded, Empire mixes optical brightener into the acrylic. When the level is turned on and the UV LED lights hit the vial, the light is intensified, and it lights that sucker up.

When you push the power button to power up the level, it lights up the horizontal vial. Press the switch again, the plumb vials light up. Pressing the button briefly toggles between the two, and when you’re ready to shut ‘er down, just hold the power button in for two or three seconds.

If you’re eager to fire up your Empire UltraView level, you’ll be happy to know there’s no obstinate packaging to contend with. Undo a threaded plastic connector, slide off the paper sleeve, and you’re ready to get to work.

The Empire UltraView level has the look and feel of a quality tool. The color is a sharp-looking “True Blue,” and the edges are milled to ensure flatness and accuracy. The vials are encased in a very robust-looking coating of acrylic, and they’re easy to locate and read even before you fire up the LEDs. The protective end caps are easy to pop out, if you want to remove them for any reason.

The Empire UltraView level lineup includes both magnetic and non-magnetic versions. We received the magnetic variety, designated by “em” before the number. We looked at the em95.24 (the 24” level) and the em95.48, which is – that’s right – the four-footer. The non-magnetic versions just drop the “m” from the product number. Easy peasy.

I tried both levels in lighting conditions ranging from total darkness to bright sunlight. The Empire UltraView level was super sharp and easy to read in all of those conditions. I compared it to an older, standard bubble level, and the difference was, er, like night and day. Note: Although the lit pictures often came out fuzzy, in real life the view is crisp and sharp.

I also tried out the magnetic feature on the Empire UltraView level. The bottom edge has rare earth magnets incorporated into it, and they perform as advertised; those suckers stick! I placed them on the corner of a wall, and they made themselves right at home, stuck to the corner bead underneath.

The Empire UltraView level also features IP54 protection. What this means is that it’s intended to be used in real-world conditions, where dust and water exist. There aren’t too many pristine job sites out there, and sometimes carpenters, masons and plumbers get stuck working outside when the chance of precipitation is 100%. I gave the two-footer a little simulated rains shower, and it came through in True Blue fashion – no leaks or failures.

One of the key features of a level is to be able to tell you when your work is level. Yes, my nickname is Mr. Obvious; how did you know? In my testing, the level was dead on. Empire claims these levels are accurate to five ten-thousandths of an inch (.0005). That’s pretty accurate. We don’t have any way to measure that kind of precision, but I’m guessing that even if it was only accurate to six or seven ten-thousandths, you’d still be in pretty good shape…

I was very impressed by the Empire UltraView levels. They are very well made, they look good, and they perform very well. These levels would be an excellent addition to the tool collection of anyone who regularly uses a level. The technology Empire developed to light the vials provides a very crisp, clear view of the bubble, and it’s incredible how much easier the lit vials make it to read them. The Empire UltraView level lineup is backed by a limited lifetime warranty on the frame and vials, a one year warranty on electronics, and a 90-day money-back guarantee. 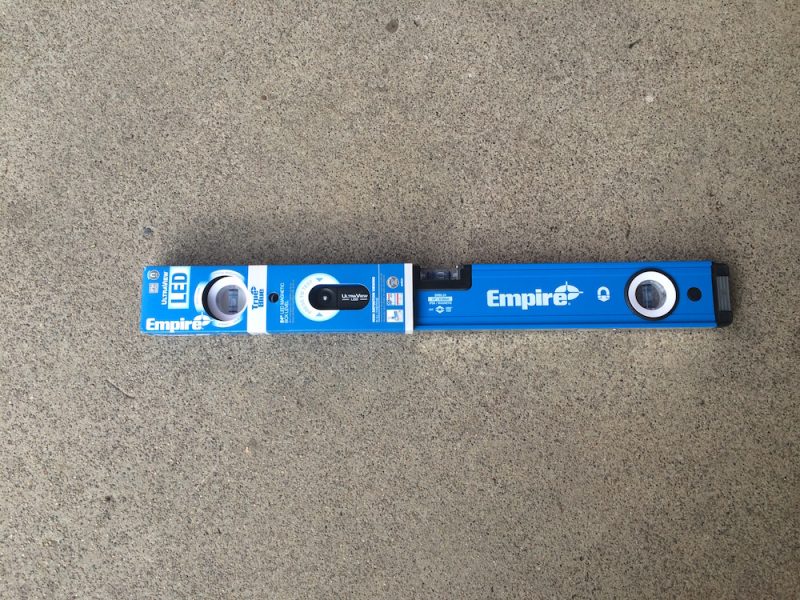 Buy the 24” from Home Depot: Magnetic

Buy the 48” from Home Depot: Magnetic