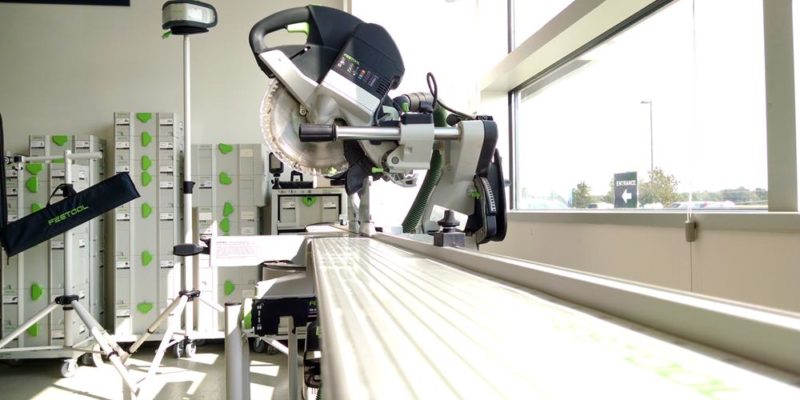 Festool just held Festool Connect 2017, so I traveled to the company’s U.S. headquarters in Lebanon, Indiana just outside Indianapolis to see what it’s all about. The Festool Connect event is mainly set up as a customer appreciation day for both die-hard Festoolies and those curious to learn more about the brand, but there was a decent representation of media folks brought in too. At the event, the spacious warehouse facility had demonstration areas set up for many of their tools to give end users the rare chance to try before they buy. Festool staff manned each station to provide knowledgeable instruction on the tools and to answer questions posed by the enthusiastic crowd. The reconditioned tool sale with discounted items was a big part of the draw too, as Festool products never go on sale otherwise.

Festool Connect – Made in the USA?

It’s probably not a big deal to most participants, but new and notable just the same is the beginning of Festool’s U.S.A. manufacturing efforts which marks the brand’s first production line outside of Europe. A single product assembly line has been started in the warehouse where they inspect, label, and apply the grip and cutline strips to their track saw rails before boxing them up for domestic shipment.

The aluminum extrusions themselves are currently being formed by another company in a not-too-distant city, but who knows what other processes will be moved to the headquarters site as Festool expands its scale of operations. A cornfield adjacent to the current facility is on land owned by the company and is slated to become a separate manufacturing plant soon. The plan is to produce power tools for the U.S. market there within the next three to five years.

Joining the family of Festool tools and accessories and Tanos Systainer tool cases are the saws of SawStop, since Festool’s parent company TTS purchased the table saw brand earlier this year. Pairing these two toolmakers means you should be looking for pricey miter saws with flesh-sensing technology to make their first appearance before too long.

And though not part of Festool, the handheld CNC router of Shaper Tools was part of the show as well. We’ll have more details on the Shaper Origin coming to Home Fixated soon. Besides having a high “wow” factor like Festool and SawStop products, a phenomenon that labels the brands as “disruptive” among marketers, the Shaper Origin router will be powered by a Festool spindle in its latest iteration, and come packed in a Tanos-made Systainer case.

Arguably the most exciting addition to Festool’s woodworking and cabinetmaking catalog is their brand new line of battery-powered sanders, complete with 5-inch random-orbit, quarter-sheet, and pointy-nosed detail models. The sanders fit a specially configured compact 18-volt battery that slides partially into the handle to improve ergonomics over the standard blocky battery form.

For unencumbered movement while using an onboard dust collection bag, cordless portability is the way to go. But if your estimated 30 minutes of battery life is up before your sanding job is, or if you’re sanding while attached to a vacuum hose and don’t mind adding a cord, an optional AC adapter plugs into the battery port for unlimited use.

Festool is expanding their line of drywall finishing and painting tools this year. Based on the original Planex motorized drywall sander, the new Planex Easy is a simplified version designed with lower cost and a flatter learning curve in mind. But it still has premium features such as a brushless motor, fast-acting pad brake, and variable speed operation. The Planex “Easy” requires no assembly and offers fewer options for customizing its configuration. It’s made in a fixed length to handle the most common applications and ceiling heights up to 9 or 10 feet, depending in part on the reach of the user. 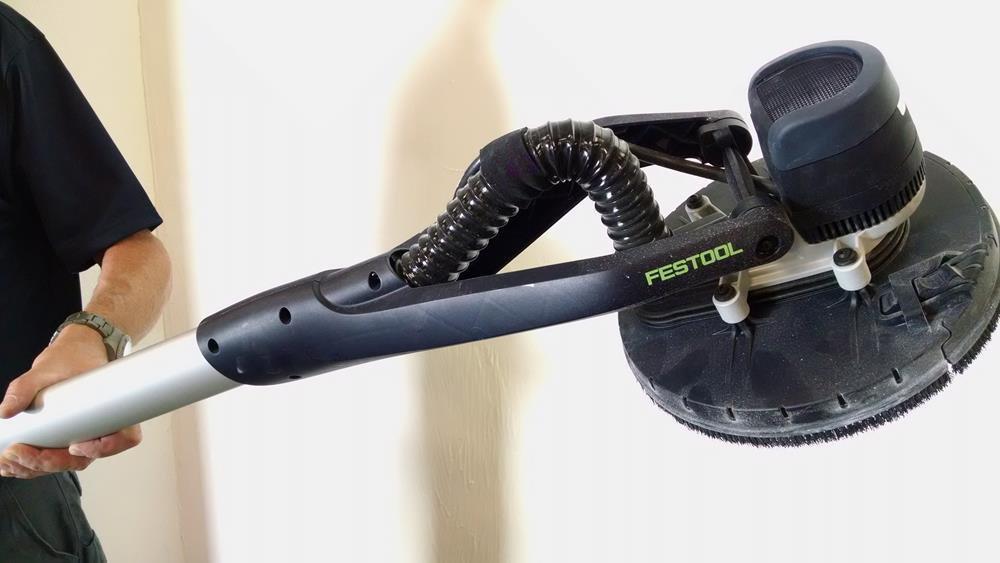 For determining when your drywall sanding is complete, Festool is offering a surface inspection light. Multiple rows of LEDs in this AC corded unit produce 1,500 lumens of white (5,000 Kelvin) light. Holding the light against a wall or ceiling provides raking illumination to accentuate bumps or hollows in the surface that cannot be seen unaided. The unit mounts to accessory adapters and a tripod for hands-free use.

New Uses for an Old Favorite

Planers are used to make things flat, right? Well, Festool’s portable 3 1/4” handheld planer can do that and more. For creative surface treatments or even sculptural uses in thicker wood, accessory cutterheads allow you to scallop, gouge, and reed, either freehand or straight with the use of the fence. For emulating hand tool marks, many would consider this cheating, but it’s much easier to use a rotary cutter for deep cutting in dried hardwoods than with a corresponding adze, gouge or molding plane. These cutterheads aren’t new, but seeing them in use gave many woodworkers in attendance, myself included, an exciting dose of inspiration for the added creative uses of their Festool HL 850 E planers.

The Latest from SawStop at Festool Connect 2017

The joining of SawStop into the Festool family is so recent that it has yet to produce any offspring, but I’m sure that upcoming collaborative efforts will mate SawStop’s flesh-sensing technology with Festool’s miter saws and more, which will likely give these saws an edge in the institutional/educational market like it did for SawStop’s table saws. For now the latest SawStop tools include their portable job site saw, router table attachment, overarm dust-collecting guard, sliding table with miter guide, and a folding outfeed table.

Some years ago, the folks at SawStop told me that a portable contractor’s saw might not be feasible for them to develop. The problem being that the inertia of stopping the blade suddenly with their safety mechanism could topple a small saw over in the process. Well, they found a way and their Jobsite saw is the result. Besides having the brand’s signature safety device, this compact saw also boasts convenience features like blade height adjuster that raises or lowers the blade with only one turn of the handle and a free-swinging bevel adjustment that can be quickly swung into place by hand and then fine-tuned with the tilt dial. Another nice touch is the secure onboard storage tray for accessories hidden beneath the table extension. The mobile version of the saw is priced at $1,299.

For their full-size shop saws, SawStop now has an improved model overarm dust collector/blade guard with a full-sized 4-inch dust-collection port. Unlike their previous version, the arm suspends the guard above the blade so it can remain attached for non-through cuts like dadoes and rabbets.

To support large workpieces but preserve shop floor space when not needed, SawStop now offers a folding outfeed table to fit their cabinet saws and stationary contractor saw alike. The tubular steel construction can support up to 250 lbs. and has rollers across its width to ease the load along. The outboard legs have adjustable feet with enough range to match the height of a saw mounted to a rolling base or resting on terra firma alone.

Available in 2018, the SawStop router table accessory will feature lots of premium options including an enclosed steel router cabinet to dampen noise and improve downdraft dust collection and a four-post, chain-driven lift with adjustments accessible through the top of the table plate. The plate opening is made in a standard size so other quality lifts can fit into the system too. Retail for the entire package to fit a 27-inch width saw is expected to run $1,150 to $1,200.

At the end of the Festool Connect 2017 workday, it was time to power off the tools and power up the live polka band. It was a Saturday after all. 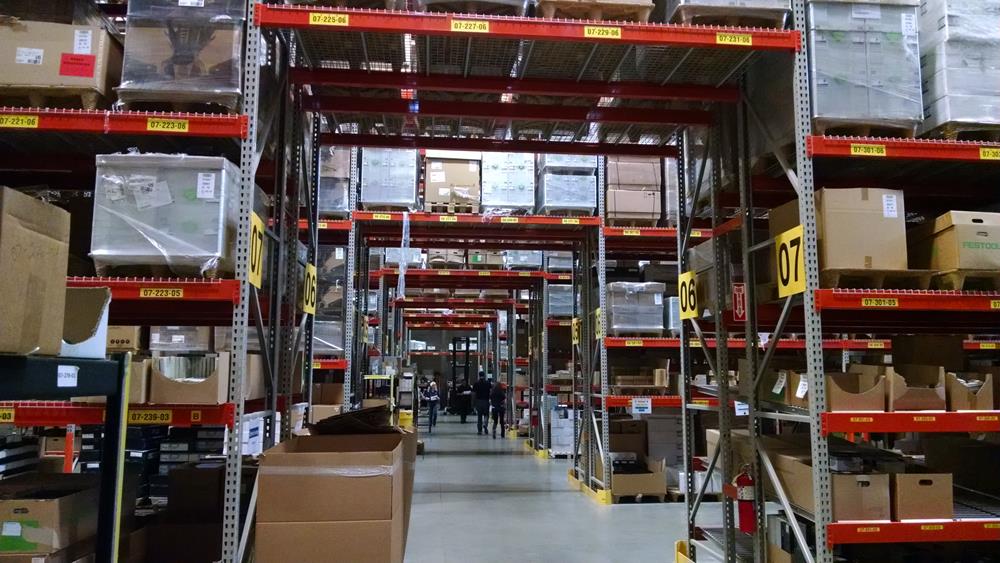 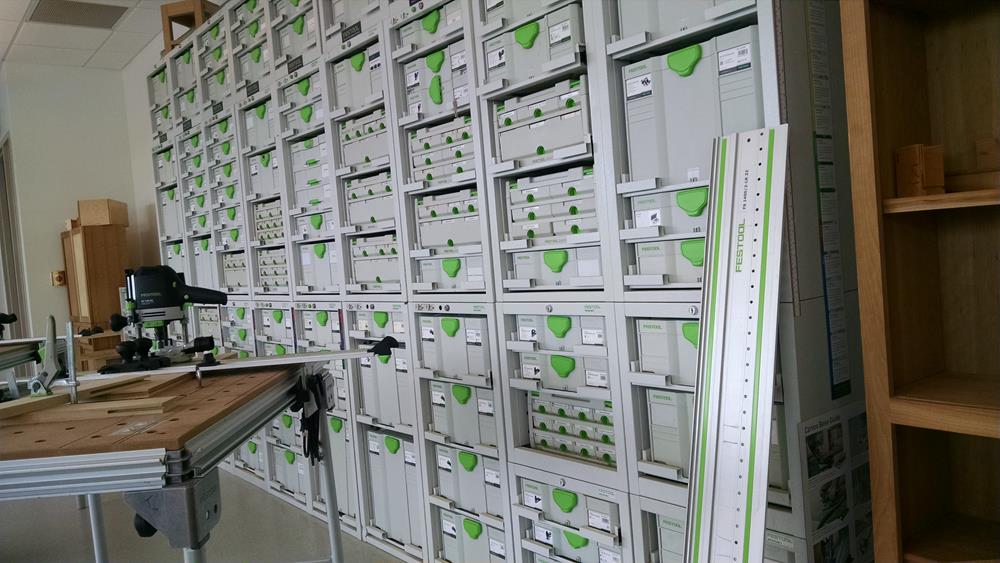 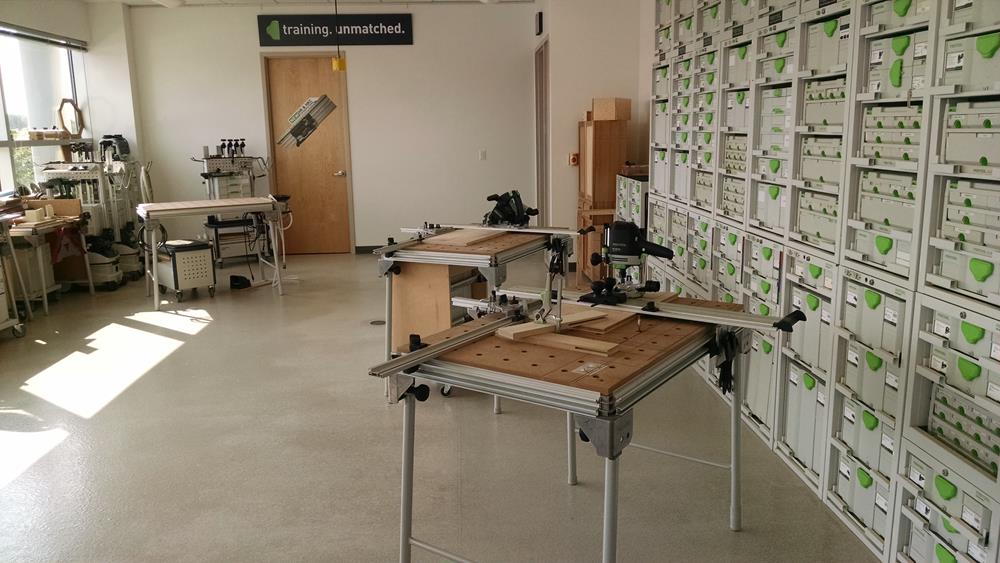 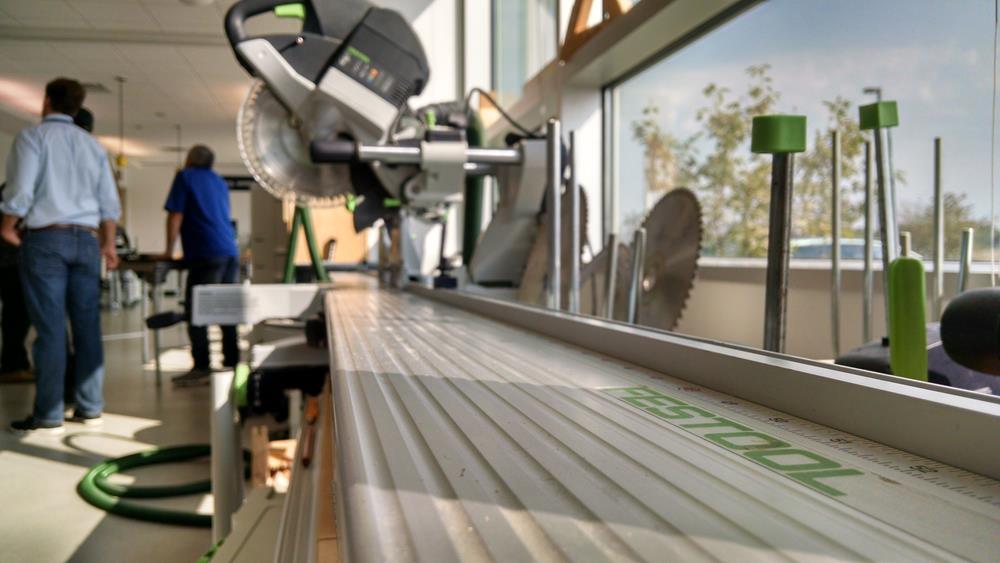