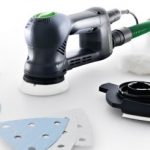 Festool recently announced their new RO 90 DX Sander, billed as “The one sander that can do it all.”  It’s scheduled to hit the market officially March 1st, 2011, and it has more than a few Festool tool enthusiasts very excited.  The RO 90 DX is a bit of an overachiever, with an aggressive gear-driven mode, a random orbital finish sanding mode, and polishing capabilities. The RO 90 DX can also be speedily transformed into a delta shaped detail sander, sans tools. Pretty slick right? But, other than the super prestigious Festool branding, how do you know you’ll be getting a quality sander and not just a glorified Harbor Freight sander dressed up all pretty in dark blue and green? We have some super non-secret, non-exclusive, non-hidden-camera video straight from Festool that will shed a little light on the testing for the RO 90 DX.

Festool also has an article on their RO 90 DX testing.

OK, so Festool is serious about testing their tools in a brutal proving ground. They put them in a dust chamber, they run extreme loads on the components, they run them for a month non-stop. Heck, they even crash test the sander! This may come as a shock to you readers, but we often have a hard time finding fault with Festool products (other than the fact that the huddled masses can’t afford them). Brace yourself, because HomeFixated is about to call out Festool on a nine second long portion of the video we just can’t accept at face value. . .

Who in the world snores at 90 db?! The video mentions this shortly before a minute in. I’m not one to quibble with sound spec’s, but, I am going to quibble with this one. 77 db is certainly a reasonably quiet tool, but according to the Mayo Clinic, sounds in the 85-90 db range include a hair dryer and a power lawn mower. If you’re “sleeping” next to someone that’s snoring at or near 90 db, run out of the house now before you suffer further long term hearing loss (which is generally considered a risk above 85 db for extended exposure)!

Decibel comparisons aside, the Festool RO 90 DX looks like a pretty hot new tool. ToolSnob also has a nice article on the RO 90 DX as well. We definitely like the idea of one-stop shopping for various sanding and polishing applications. You’ll be able to find the Festool RO 90 DX Rotex Sander