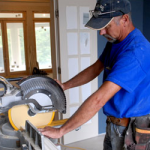 If you’re like me, (may god help you), you’re always trying to get more done in less time. I’ll admit it, I’m an efficiency freak. That’s why I was pretty excited to hear about the Final Cut Blade, which promises butter-smooth cuts on your miter or table saw. Final Cut was gracious enough to send us two blades, one for us to review, and another to feature in December’s Free Stuff Giveaway!

Granted, sometimes doing two things at once isn’t recommended, for instance, using a table saw while watching TV. But in the case of the Final Cut Blade, you can saw and sand at the same time. Think of it as your normal saw and a serious disc sander all in one. Although intrigued by the concept, I was also a bit skeptical. Slapping some sandpaper on a saw blade just doesn’t fully sound like it will work.

I installed the Final Cut Blade on my Bosch Table saw (I used their 10″ blade, but they also recently released a 12″ blade for larger saws). After doing several cuts I learned a few things:

After experimenting with the blade, my inclination would be more to use it more on the miter saw for precision cuts. If you work with moulding much, you know that hand sanding cut edges before lining them up inevitably makes the joint less than perfect. The beauty of the Final Cut Blade is that by sanding at the exact same uniform angle as your cut, your joints for crown moulding, framing, etc. will wind up absolutely perfect (assuming you don’t follow the “measure twice, cut until it’s too short” technique if often employ). I’d also be inclined to use it on longer cuts in softer wood on a table saw, where hand sanding later would be very time consuming. The Final Cut Blade caters to both my internal efficiency freak and perfectionist at the same time.

Final Cut Blades also has a video which I would normally link to, but frankly it freaked me out a bit. Clearly the person in the video is a lot more comfortable around whirring saw blades than I am, since his fingers seemed to be remarkably close to the blade as he demonstrated some rip cuts. In the interests of encouraging the use of safety devices like push sticks/blocks I decided not to link to the video. Naturally, if you’re using the the Final Cut Blade, or any other saw blade, please use proper shop and tool safety.

Speaking of safety, the Final Cut Blade does claim to offer some improved safety. Final Cut states that kickback is “greatly reduced” and binding of blades is eliminated. This would make sense to me in that the blade would tend to sand whatever would normally start to bind. However, I didn’t feel I could safely or scientifically test the validity of the improved safety claims. While I love testing tools, testing saw blade kickback and binding is not something I consider in my job description. If you’re concerned about safety, which anyone using a table saw should be, then the potential safety improvements are a likely bonus to the Final Cut Blades.

The only negatives that come to mind for me for the Final Cut Blades are a slight increase in dust, and replacement when the sandpaper wears down. I actually expected a real dust storm from the blade, but was surprised to find only a mild increase in noticeable dust. Of course, with sanding, you can’t see all the dust, so I’d expect more dust from the blade and take appropriate precautions with dust collection and/or a suitable mask. I do wonder what the viability of changing out the sandpaper is. Final Cut sells just the adhesive discs, either as replacement discs, or to put on your own saw blades. Somehow an adhesive disc that’s strong enough to stay on the blade for repeated cuts doesn’t seem like it would be easy to remove before slapping on a replacement disc. However, Final Cut recommends removing worn discs using lacquer thinner. I’m not sure that’s something I’d want to deal with, but it is an option. I also read some varying reports on the longevity of the discs. If we’re lucky, maybe the company itself, or some Final Cut Blade users will chime in via the comments below to share their expertise on disc longevity and the ease or difficulty of disc replacement.

I did find some reports of people having issues with applying the discs to their own blades (with different spec’s than the Final Cut stock blades). If you do wish to use your own blades, Final Cut Blades states: “The Final Cut Discs are not designed to work with all blades; however, if you have a blade that meets the following specifications you will most likely see good results! The specifications are: Plate Thickness of 0.070 and Kerf Thickness of 0.104.” My guess is that it’s safest to go with the ready-to-go blade/disc combo that’s on the Final Cut Blades web site. My inner efficiency freak and perfectionist both recommend Final Cut Blades for precision cutting on table or miter saws. Their 10″ blade runs about $65, and their 12″ blade is about $117. Or if you’re lucky enough to be reading this in December of 2009, you can win one free in our monthly Free Stuff Giveaway! 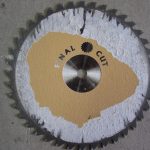 Well, after relatively little use on our table saw, the sanding disk on our Final Cut Blade failed. In fact as it pulled away from the blade, the loose disc wound up slicing into the workpiece. You can see the aftermath here. If you’re buying the Final Cut blade, I’d recommend doing so with the expectation that the sanding disc will fail at some point. Personally, I think I will be “sticking” to conventional saw blades sans attached sanding discs for the time being.