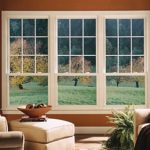 If you suspect you have a draft from your window, it’s something to take care of sooner than later. Your home can lose energy from heat exiting and even require more heat to compensate the cold air that could be coming in.

1. To test if there’s airflow around a window, simply ensure your windows are closed tightly and hold a lit candle near the window seams. As you move the candle along the window, watch the flame. If the flame bends or flickers quite a bit, there’s a good chance you have a draft – and a gap in your window’s sealing – at that point.

It’s worthwhile to check the caulk on the outside window frame (although the candle trick won’t work so well outside!). Visual cues like gaps and cracks in the exterior caulking are what you should be looking for.

2. Often times, the old caulk needs to be removed in order for you to properly seal the window. You can do this with a little elbow grease, but sometimes caulk softener is needed. What’s a caulk softener? I’ve heard of guys doing things like thinking about dead puppies and kittens – but I have no idea how that would help make a caulk soft in this instance. Instead, you should try 3M Caulk Remover

or a similar product to make caulk removal easier.

3. Once the old caulk is removed and the surface is cleaned, you can use a new and improved caulk to seal your window or fill in gaps. There are a few caulk options out there – check them out. The job is a simple one and should be dried in about 12 hours. Test with your candle again to see if your any drafts are still getting through. If you still have drafts even after re-caulking, you may have structural issues with your window that will require window repair or replacement.