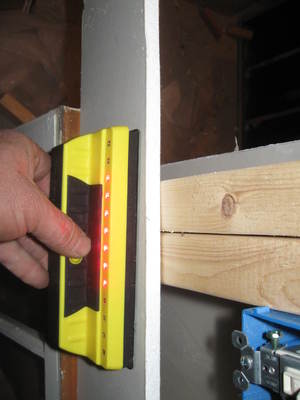 When Home Fixated got the opportunity to try out the Franklin ProSensor 710 Professional Stud Detector, we were dually up for the task as well as a bit skeptical. As many of you probably know, stud finders can be notorious for sketchy accuracy (and that’s putting it gently for a few of the stud finders out there.) In fact, we almost bagged writing this review because the first model we received (tried out by both Marc and me) seemed to be more of the same — a colossal bomb. The folks at Franklin were confident we had ended up with a damaged sensor, sent me a second one to put to the test and…

You can imagine my surprise when I, (with the help of my better half who just happens to be a professional carpenter of over 20 years), discovered that this stud finder actually works…works really well…and wait for it…works consistently. Franklin’s 710 ProSensor may be the breakthrough stud finder we’ve all been waiting for. (Right about now is when you’d probably expect a slew of predictable and childish verbiage about stud detectors, and as tempted as I am, I’ll refrain. You’re welcome.)

At 3×7 inches and only 6 oz., the plastic detector housing is lightweight but sturdy. The soft rubber finger grip makes it easy to hold and the “On” button depresses with a feather light touch. The sensor board is backed with a Teflon pad allowing for a little give as you press to the wall. This helps with an accurate reading since most walls have slight, undetectable curvatures. The 13 LED lights along the length (as opposed to the one light I’m used to with other sensors) are excellent for indicating multiple objects and more importantly object widths, which is huge, allowing you to find the center of the stud. You know you’re hitting the meat of the stud/beam instead of guessing, crossing your fingers or nailing/screwing into the edge of the object. The sensor takes two AA batteries.

For Commercial or Home Repair: No Matter How Accurate Don’t Rely on the Stud Finder Alone:

As always, you should still exercise caution and not rely totally on the sensor, since it will also detect things like water and gas lines and electric wires. Make sure to turn off gas, water and electricity before you go bangin’ those nails! (Although this unit is good, it’s not magic — the LED lights only identify the location and width of an object, not the type or material.)

Franklin indicates a scan depth up to 1 ½”, but also mentions certain materials/instances to watch out for including lathe and plaster, mesh reinforcements, metallic substances (metallic wallpaper being one example) and foil-backed insulation. The metal can potentially block the detector’s signal.

We tried the sensor on 3/8″ sheetrock, a textured paint over sheetrock and ½” OSB board with a meshed resin coating (Zip System wallboard) — all with perfect results. (As Franklin notes in their product description, a thicker or mesh reinforced lathe and plaster wall may not read as accurately. And, though we didn’t have an opportunity to test it on a surface up to the full 1 ½” depth, we found it to be dead-on up to at least ¾” as you’ll see below.) These were all just little test runs we did around the house, so does it actually perform out in the field? Oh yeah.

Job #1: The Mister had to do a ceiling repair entailing new framing over the existing lathe and plaster. The stud finder easily located the ceiling joists through ¾” lathe and plaster so that 2×2 furring strips could be fastened securely.

Job #2: The Mister again, on a remodel project which provided limited specs. An addition to a bedroom called for a custom-made sliding barn door install (pictured) but exact specs were unavailable (shocking!) The delivery of the door was delayed (that never happens!) but the client insisted the project move forward (unheard of!) so he proceeded with standard interior framing. Not until the addition was nearly done and final paint complete did the door and hardware kit finally arrive. It required a 6′ header in order to support the horizontal hanging bar across the span of the opening, which was…a lot less than 6′. Franklin’s stud sensor did the trick. It located the studs perfectly accurately so the hanging bar could be installed securely enough to support the weight of the door and even better, without damage to the finished walls.

So the consensus is…this stud finder rocks. Our favorite feature is the series of LED lights, which allow you to see the width of the object. You know whether you’re dealing with a standard stud, a doubled up stud, a partition — being able to tell the width of the object makes all the difference and eliminates so much of the guess work (not to mention the cursing.) On a scale of 1-5, five being high, the hubby gives it a 4 ¾. The only way he’ll give five stars is when Franklin (or somebody) comes up with an “X-ray Vision” version. Oh, and he wants a cape too but that’s another story.

is available on Amazon, where it is also very favorably reviewed, for about $50.