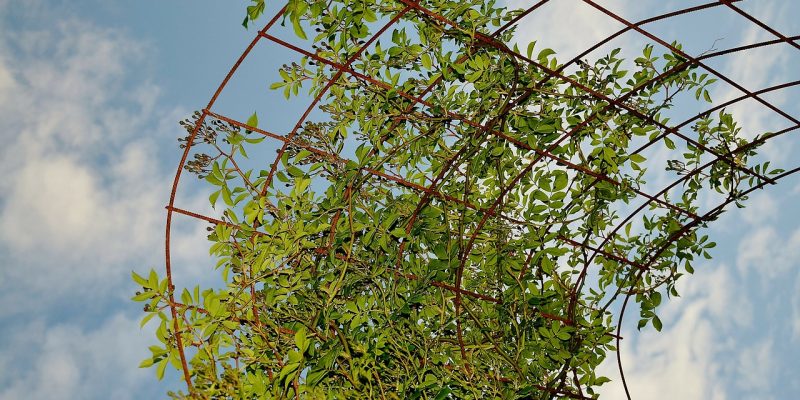 As any gardener knows, perpetually floppy plants- like the rest of us- need somebody to lean on. These vines might enjoying staking out their turf or they might prefer hanging out with more support. Here’s what to do when the situation calls for trellises.

When Back Up From a Garden Trellis Is Needed 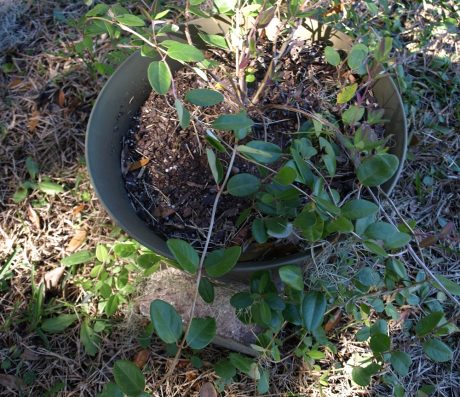 Climbing plants and most types of vines usually need a trellis, although you can certainly try your luck by making a temporary cage for them out of stakes and garden string if that’s all you have handy when your bank account hits the negative numbers. Of course, faster growing plants will need support sooner than others might.

Most trellises are made of wood or some type of metal. Wood structures are usually fairly nice looking, despite the fact they aren’t as expensive as some of the nicer metal ones. However, if these trellises are not treated with some form of sealant and they are left out in all weather, they can deteriorate rather quickly. The part that comes into contact with the soil may also rot. I love wooden trellises but the cheaper ones only last about 3 or 4 years, tops. Slapping some paint or sealant on them would probably extend their usefulness for a longer period of time. 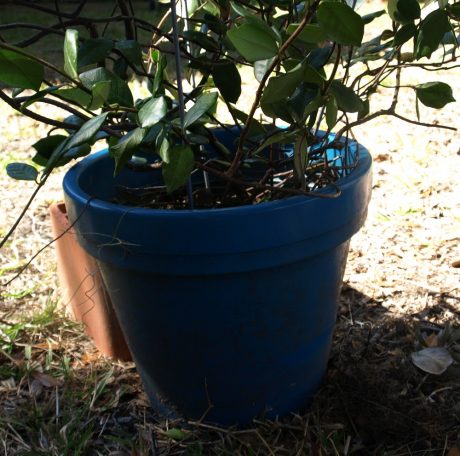 The cheapest form of premade metal trellis is probably going to be a tomato cage (see above), which I have used to good effect in my own yard. Even though it sounds like a ridiculous notion, these structures are a good money saving option for lightweight plants. I’ve currently got a confederate jasmine, grapevine, and a honeysuckle plant growing on tomato change. Even so, the grapevine is a definitely do-not-try-this-at-home situation. It is eventually going to need a much stronger support system than it currently has.

While they can be found for less, tomato cages generally run under $5 at most garden stores and colorful ones run under $10. Of course, this option isn’t likely to be your first choice if aesthetics are a big concern but it is definitely not as tacky as it sounds. By comparison, the nicer metal trellises average around $10 to $15. They are usually the priciest option available. It’s also true that they will probably last the longest but they aren’t always as sturdy or attractive as the wooden ones. However, opinions naturally vary and heavy metal might just be your poison of choice.

When The Wood Trellis Falls Apart 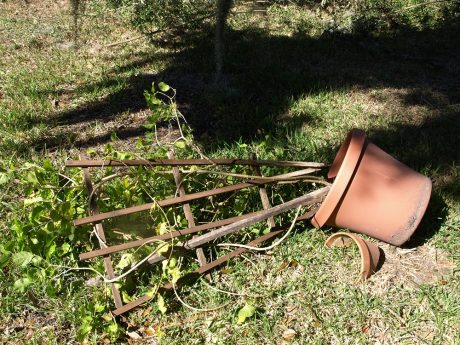 I’ve been having an extremely fun time with high winds that seem to enjoy bowling for plants lately. Usually, this is all a matter of picking up the toppled container and returning it to its “regular, upright position” like they always say on amusement park rides and airline flights. The trouble comes when the plants not only fall over but end up in a wild tangle of limbs and broken pieces of wood. There are few things more discouraging than to go into the garden to sniff the flowers only to find them collapsed in an untidy heap. Remember what I said about how wooden trellises have a limited lifespan?

Obviously, anyone in this situation is obviously going to need some new trellises. I got two tomato cages and a decent sized metal fan trellis for about $20 to fix the problem. The first plant was easy enough to rescue. It was sans trellis and had a bunch of vining branches which had flopped over the ground. All I had to do was poke the spiky ends of the tomato cage into the dirt of the container in question and weave the plant’s tendrils around the available structure. I did leave some vines lying around in hopes that they would grow into the dirt and gift me with some new plants. You never know.

The collapsed plants were harder to fix. I managed to break apart the trellises by laying the plants flat on the ground the stomping and tearing the structures apart. In hindsight, doing what I did is probably a bad idea because it could also seriously damage the plant in question. However, most people weigh more than 100 pounds soaking wet and could easily manage to pull a deteriorating trellis apart. Gloves will definitely come in handy here. One of the trellises contained numerous staples that could easily have extracted more than a pound of flesh. 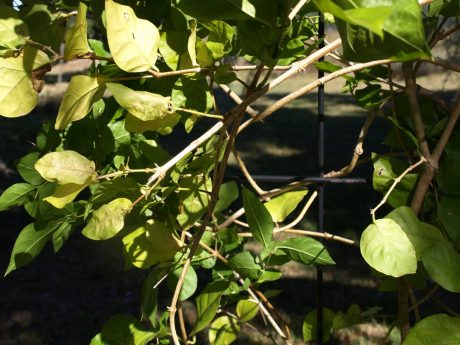 Although the Confederate jasmine is a slightly older plant than the Arabian jasmine, it has thinner branches and was subsequently much easier to weave onto a new structure. It had also engulfed the tiny, falling-apart-trellis and had recently been pruned to detach it from a wall prior to our move. So getting the wood pieces out of it was also a relatively simple procedure.

Despite the fact that the supports had rotted completely on one side and the trellis kept collapsing at the slightest provocation, the Arabian jasmine had been tightly woven to the supports and was stuck fast. The planks that comprised the trellis had to be completely disassembled to get the plant loose. Even so, I still couldn’t prevent some damage from occurring. You’ll definitely want to take it easy when you’re weaving already established plants onto a new trellis but breakages are probably inevitable. 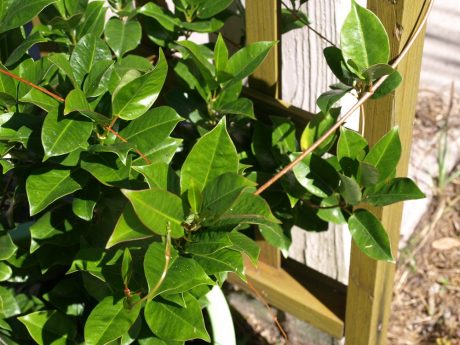 Of course, accidentally broken branches can be used to create new plants. Dip the sprigs in rooting hormone and then place them in a water-filled container. You’ll want to set the container and branches in a sunny spot so that the broken pieces will grow roots. Sometimes this will result in a new plant. Sometimes it won’t, but it certainly won’t hurt to try. Good Luck and May the Best Trellis Win!