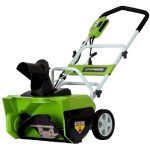 Parts of the US have been hit with a whopper of a winter storm – the likes of which can only usually be seen on a typical June day in Canada. Har har.  There’s not much too laugh at, though, when your car has been snowed in or your walkway is a big, white lawsuit waiting to happen.

You could shovel, yes, but for those gigantic dumps that keep on coming, something with a little more oomph is sometimes desired. You need a hero this winter – and we think we’ve found it. We’ve talked about green electric mowers before on HomeFixated – so how about a green electric snow thrower?

One of the most popular models available for those who are trying to keep green while removing the white stuff is the Greenworks 26032 20″ Electric Snow Thrower. As the name suggests, this snow thrower is entirely electric, which means no gas, no fumes, no super loud noise to contend with. The 12-amp motor does need to be plugged in (and you’ll likely need an extension cord if you have a large driveway), but the cord lock keeps the cord happily out of your way.

With little physical effort (the Greenworks Snow Thrower is on sturdy 8″ wheels, is ergonomically-designed and weighs just 37 pounds) you can push the snow thrower to clear patches 20″ wide and 10″ deep. The snow from your driveway or sidewalk then gets shot out through an 180-degree directional chute that you can adjust in any direction and so that it blows the snow out to a distance of up to 20 feet (while a fun idea at first, pointing the chute at your neighbor’s car or kid aren’t recommended).