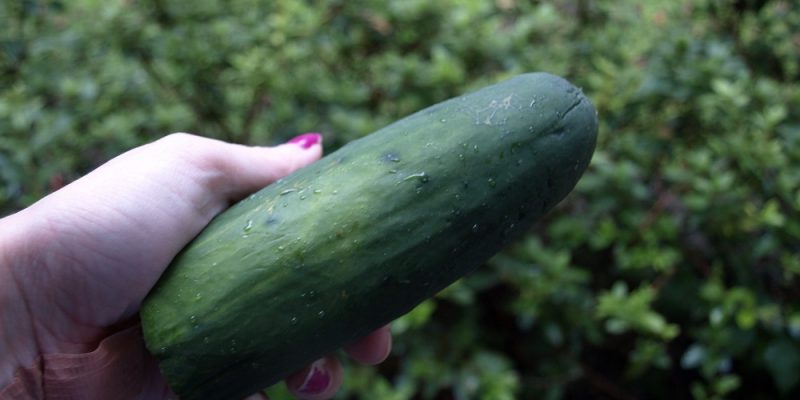 I have enjoyed pickles since I was a small child. They make the perfect snack. They are sweet, crunchy, and tangy all at once. And my grandmother makes the best sweet pickles in the entire world. I have yet to get her to part with her secret recipe. No amount of pleading seems to budge her on the subject, and mentioning that she should tell us before it’s too late didn’t seem to have the desired effect. Instead, she swatted me. All of her descendants are, therefore, going to be in quite a pickle if anything happens to her (more likely, without pickles). But, the tedious politics of acquiring top-secret family recipes aside, a quick Google search reveals all. Or at least, the main ingredients in most recipes for a homemade dill pickle so I can expound upon how to grow these things in more detail.

My cucumbers were cruising merrily along until the weather demons decided it would be fun to mess with my schemes and hike the temperature up to 100 degrees for a few days. The irony of the situation is that it has been chilly and rainy ever since. During three-day heat wave I watered them, but the fact is that my plants were completely and utterly toast. They were fit for nothing except the compost pile. It was a tragedy along the lines of Hamlet. Or maybe Romeo and Juliet. After all, several good cucumber plants met an unfortunate demise in fair Georgia where we lay our scene.

Alright, I’ll spare you all my pathetic attempts to rewrite Shakespeare and get on with discussing oblong green vegetables. In other years, I have had better luck with these temperamental fruits. They like it to be warm, but not too warm. They like moist soil, but not soil that is too moist. They about as picky as those Hollywood stars you read about that want only blue M&Ms in their dressing room for reasons that are too complicated for us lesser mortals to understand. Fortunately, the grocery store still sells cucumbers! (See photo for proof) Clearly, if the weather is not on your side the grocery store just might be.

My obsession with this particular herb started with my other grandmother’s infamous dill crackers. These yummy morsels are basically ranch dressing flavored Kryptonite for anyone that thinks carbs are evil. You cannot eat just one cracker. Resistance is futile. The entire bowlful must be devoured in one sitting. No, I’m not drooling on the keyboard, why do you ask? For those of you that are curious the recipe is here and you definitely want to use the garlic salt. It’s not optional. This recipe is the main reason I grow dill every single year without fail.

Dill plants are incredibly easy to grow from seed and, unlike most humans, they don’t need great growing conditions to reach their full potential. In fact, I unintentionally grew the biggest dill I have ever seen in a pot of pure sand. My father had said he would bring me some potting soil and I thought it sounded like a great idea. Cut to several containers full of dead plants. It was only later that I learned his money-saving idea was to dig up some soil from the farm next door and bring it to me in a huge bucket. Don’t try this at home. Regular yard dirt placed in containers will kill any plant it comes into contact with. That dill was clearly a special snowflake.

The same terms and conditions apply as for dill. See gardener for details. Actually, it’s a tad more complex than that, but not much. The only real difference in growing the two herbs is that cilantro (coriander to un-American persons) likes slightly warmer temperatures. Of course, in terms of flavor, dill taste like ranch dressing and cilantro tastes somewhat like soap.

I personally prefer the seeds (coriander!) over the leaves as a flavoring agent and they are what gets used in making pickles. All gardeners need to do is pick the green seeds, let them dry out, and then bottle them up in a clean container. You can use old medicine bottles in a pinch, but trying to explain that scenario can be problematic. “Oh no, nothing’s wrong. I always liberally season my pasta with pills, why do you ask?” It’s game over if the police get involved. Fortunately, my mother only had a moment where she thought I’d taken an interest in illicit substances.

With the possible exception of squash, you can’t help but love plants that practically grow themselves. Garlic is one of those plants. It generally has no bug or diseases problems and does fine even with limited supervision. It also has the great aspect of growing during the fall and winter months, which means I can recycle the same containers I used during the summer for the tomatoes and not have to purchase more. Plus, if you use enough of it, it keeps the vampires (and everybody else) away.

Garlic is like onions in that there are different types for higher latitudes (the North) and lower latitudes (the South) and picking the right type is essential for success. Softneck types are usually recommended for the American South. I’ve personally been growing Inchelium Red garlic for several years now. This variety is a medium flavored one, so if more zip is your thing you’ll want to pick a hotter type. My family has been happy with the Inchelium Red, though, and it grows pretty well in 5 gallon buckets (see photo). You should plant 1 clove per bucket, though you can squeeze in 2 if they’re really small. It’s also not a bad keeper, but I did have a few heads rot after I’d set them aside to use the year afterwards so you’ll definitely want to keep it in a dry place.

Good luck on your homemade dill pickle adventure. Let us know how yours turn out!