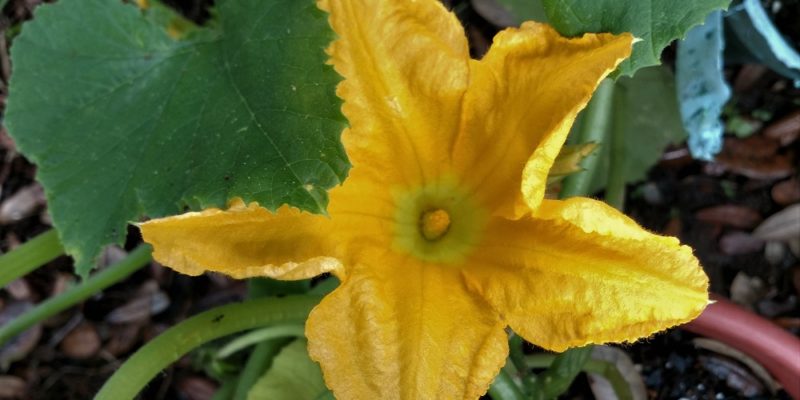 I love fried squash, so much that I could eat my weight in it. Which would then no longer be my weight at all, but some higher number. The trouble is that I have always thought squash was one plant that required an actual yard to grow it. After all, it is a plant that can become rather large under the right conditions. When I found a seed packet (Pic-N-Pic Hybrid) that claimed these plants could be grown in a 12 inch pot, I was understandably intrigued. It turns out that growing squash in containers really isn’t that difficult.

Although there are other varieties of squash, our family is partial to the yellow, crookneck kind, so that’s specifically what I’m going to be talking about in this article. However, these tips should work for other kinds too.

Squash is a vegetable, so it naturally needs plenty of sun. One plant is currently in bright shade part of the day. But it gets a great deal of evening sun so it’s currently doing okay. You’ll need to water the plant regularly to make sure it stays healthy and produces decent-sized fruits. Just don’t get the leaves wet when you’re watering it, because that tends to encourage problems like powdery mildew. The Burpee Guide to Growing Squash is an even more in-depth guide, which might also come in handy.

I started almost all my seedlings this year in starter pots made from toilet paper rolls. They’re a handy, economical option that generally works pretty well, especially if you find yourself with dozens of plants to pot and not enough time to go to the store. However, I did have some mold problems with the potting soil and occasionally the starter pots were lopsided and would fall over. I switched to Jiffy pots for the last batch, but these didn’t include any squash. I’d also recommend buying soil mix that’s specifically for starting seeds because of the strange mold problems that I had earlier this year.

I started the first batch of squash directly in the container I’d chosen because the weather here has been warm enough to do so for some time. But I opted to start the second batch of seedlings in smaller pots. This is because I planned on putting them in a round terracotta pot once I had finished pulling up the radishes that were previously living there. I started the first set of squash in March and it took about two weeks to germinate. However, the second set sprouted about a week faster because of the warmer weather. This may have also been because they were in a spot that was getting a tad more sunlight. The first plant took about two months from being planted to produce fruit. It may a bit longer before it’s actually big enough to eat.

According to Grow Great Grub, a great resource for container gardeners, Gayla Trail recommends growing summer squash in pots that are 10 to 12 inches deep. However, the seed package directions said that the squash plants would be alright in 12 inch containers. But those instructions seemed to be referring to diameter rather than depth and I’d used up all of the bigger pots for the tomatoes. I went a bit smaller than that, with a 10 inch container that’s probably too shallow as well. I may have to eventually transplant them to a bigger container so you’d be better off to start with one in the 12″ plus size.

The larger squash is covered in blooms and currently has two tiny fruits. I may have to eventually stake it because it keeps flopping over on the side. I don’t foresee this being a problem with the seedlings I just transplanted, because they have enough room to spread out. However, the pot depth might be an issue once they get a little bigger. I’ll keep you posted. Just remember that when you’re using plastic containers, you need to be sure they’re made of food grade material so that you can keep any harmful substances out of your food. As always, happy gardening!