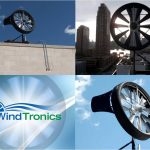 So I was having a conversation in Las Vegas that mentioned all of the following: shaft, friction, pole mount, touching parts and legal issues. No, this wasn’t at the National Hardware Show after-party, although some of those terms likely came up there too. These were all mentioned during a discussion I had with a representative telling us details about a small wind turbine from Honeywell and WindTronics. And, I kept a straight face and marginally-professional demeanor the whole time. Sarah Jenan was kind enough to take a few minutes to discuss what was definitely one of the more eye-catching products at NHS, a 6 foot diamter rooftop mountable wind turbine.

During the interview, Sarah and I discussed some very relevant issues to putting a wind turbine on your house, including: wind requirements (avoiding the dreaded turbine lawn ornament scenario), legal / HOA concerns, turbine costs, what to expect for installation, and the unique design and performance characteristics of this particular turbine. The Honeywell turbine forsakes the conventional approach of using heavy gearing (with lots of mechanical resistance) in a central “nestle”, and instead puts the energy generating parts at the perimeter of a wheel-like structure, aka, the “Blade Tip Power System (BTPS).”

The result is a turbine that starts turning, and more importantly, starts generating electricity at much lower wind speeds than conventional turbines. There’s something sad about seeing giant, ultra expensive wind turbines not turning in the wind because of all that mechanical resistance built into them. That’s not something you’re likely to encounter with this Honeywell wind turbine technology which WindTronics describes as “The highest output, lowest cost per kWh installed turbine ever made (in class and size).”

Check out the scintillating details in the video:

So, the next time you overhear someone talking about pole mounts and friction in Vegas, don’t assume . . . they might just be discussing some promising new green wind turbine technology. Harnessing mother nature’s wind with the Honeywell Wind Turbine will set you back about $6500, plus installation.