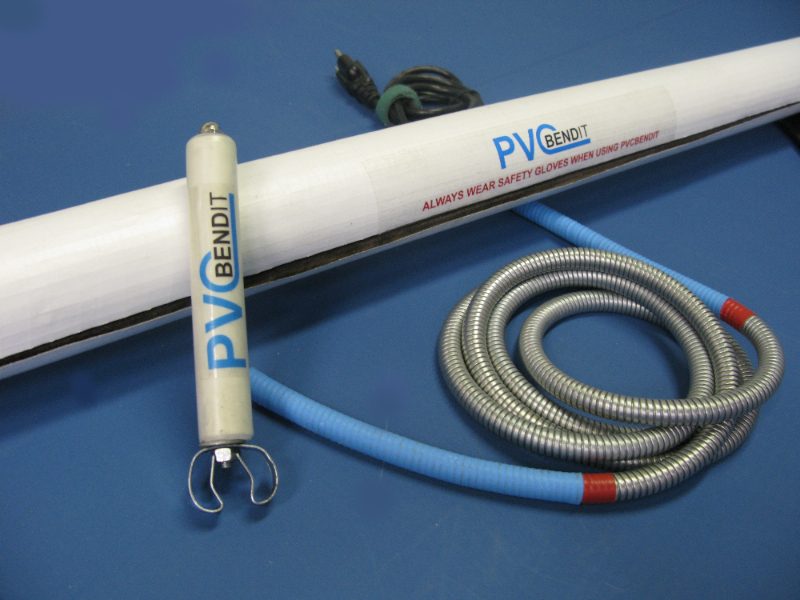 I don’t have a lot of memories of my dad, but one I do have involves the time we temporarily liberated a stash of orange pvc pipe from a construction site. Don’t ask me why they were orange, or what the statute of limitations on petty theft is. Anyway, my dad made the pipes into a very cool spaceship. Add one racing helment and the next thing you know, I was a total space cowboy. At the time, we were limited to the natural bend of the plastic pipes, but just imagine what we could have done if we were able to bend the pvc just about any way we wanted. It turns out, aside from building hot spaceships, bending PVC is a very handy skill to have for all sorts of tasks, both professionally and creatively. And, we think we may have found the ideal tool to do it with.

Thanks to our friends over at Make Magazine, known for using PVC for everything from personal robotics to DIY light fixtures, we were introduced to the PVC Bendit. I once watched an electrician heating a sizable piece of PVC to run some pretty serious copper underground. He had a long rectangular tube that costs big bucks and delivered pretty meh performance. It did the job, but not particularly efficiently. You might also think the PVC Bendit uses an insane amount of power, but it’s surprisingly thrifty when it comes to electrical consumption. “It releases less than 20% of the heat that box benders do. In a direct comparison, a 3′ box bender emits 1300 watts (at $700), while a 3′ PVC Bendit runs at 169 watts (at $200).” The PVC Bendit also trumps heat box benders with an available nine foot length. For most people three feet is plenty, but if you’re looking to get crazy with your PVC bending escapades, the grande nine footer should handle about any bend you can imagine. Some people are making greenhouses with these things!

That might possibly be the most quiet promotional video ever!

So, what can you make with the PVC Bendit? A plant display stand and coat/hat rack are just a couple of the impressive projects displayed on PVC Bendit’s Gallery page. Never has bending PVC pipe warranted its own photo gallery until now. While we haven’t personally used the PVC Bendit, Make Magazine’s recommendation makes it well worth a look for your next project that involves bending PVC.

Bend times will vary based on ambient temperature, humidity, barometric pressure and other environmental factors, however, in our tests, we’ve found that bend times can be as fast as:

We haven’t done precise time tests on larger diameters, so it wouldn’t be fair for us to throw any figures out at this point. We’re developing a Series C to bring us out to larger diameters with times comparable to what we’re acheiving with Series A and B. At that point, we’ll update this section again to bring you the most accurate figures we can come up with.
Again, though, individual bend times will vary. Summer bending in Arizona will be faster than winter bending in Alaska.

As to safeety, PVC Bendit says, “When used properly, the PVC Bendit will not emit fumes or odors. It is still not recommended to bend PVC or any other plastic with children. It is also recommended that you use PVC Bendit in a well-ventillated area. ” We’re not quite sure what makes PVC safe for adults, but not for children (other than most adults having better impulse control to resist grabbing hot things), but considering this plastic isn’t exactly a health food, we tend to concur with avoiding exposing your precious offspring to it.

on Amazon starting at $219. Make a few pieces of furniture and this thing has already paid for itself!