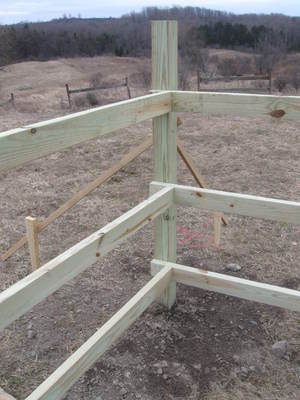 Okay, so it’s not technically a true split rail, but it’s a sturdier alternative. This split rail looking fence with wire mesh was a necessity for us since the arrival of two puppies not long ago. The “Dog Whisperer” I am not, and I was clearly delusional in thinking I could have them trained to stay on command by the age of four months. Whether you need to keep puppies in or pests out, this just might be an appealing alternative to the traditional split rail fence.

Materials for the Split Rail Fence:

One 60 lb. bag of pre-mixed concrete per posthole

First, decide where the fence will run and get a rough layout so you know how much material to buy. (Amount of material will vary depending on the overall dimensions.) We gained quite a bit of extra footage by butting the fence to a section of wraparound porch on one side and our deck on the other so that these two barriers act as part of the fencing. The standard for post placement is 6-8′. We decided on 8′ so that each 16′ rail would end up being fastened to, and spanning three posts. This allowed for better stability with no butted joints.

Run a string line to indicate the fence perimeter and mark 8′ apart where the holes will go. The ground our house sits on is rocky, so even using the auger was no piece of cake. Our postholes had to be 42″ deep to make sure they went below the frost line (check your local building codes so you know how deep to dig) and other than a couple that fell a little short, we hit the mark.

(NOTE: During the post install phase, we were regularly checking the lengths/runs and making minor adjustments to the uprights. Some of the holes were slightly out of place and/or the posts looked “off” due to uncooperative rocks.)

Setting the Top Rail is Key:

The ground will be uneven. Even if it looks nice and level, it most likely is not, but you want the fence to follow the contour of the land, so at this point, the level goes out the window. On each post and from the ground up, measure and mark a point slightly higher than the height of the wire fence. For our 48″ tall fence, we measured and marked at 49″; leave a little play for when it’s time to install the wire fencing.

Starting back at a corner post, begin running the 16′ rail. Set it on the marked spot and fasten with ONE SCREW ONLY. Move on to the next post…and so on…until the top rail is in place. Step back and eye the rail to identify any major waves or height differences. If any point looks out-of-whack, loosen the ONE screw from the post (you’ll thank me for this) and let the rail section rebound naturally to where it wants to “sit”. (Or, as the situation may warrant, jam/force/wrestle it into a better position and refasten the screw.)

Once the top rail is set, use that as the measuring start point for the remaining tiers of rail. Measure and mark a point half way down from the top rail  for the second rail and another mark as low as you intend for the third (bottom) rail to sit.

Pour a 60 lb. bag of pre-mixed concrete into each posthole, allow it to cure (most of the day) and backfill the holes with the dirt you’ve already removed. Tamp down, soak with water and tamp down again so the posts are solidly set.

The Split Rail Fence is in Place — Now for the Wire Mesh:

Start fastening at a corner post using ¼” galvanized crown staples about every 12″ along each post, making sure to fasten into the rail as well. Unroll the fencing to the next post, pulling it taut as you go and fasten in the same way to the next post. Continue until the fencing is installed across the entire span of split rail. We went back and reinforced the ¼’ staples with ¾” galvanized fence staples (optional). Cut off any remaining fencing with wire snips and the split rail fence is complete.

Garden/tent stakes or a skirting fastened to the posts along the ground level is also an option, though we didn’t really have a need for any of it. At a later time we’ll add gates, but that’s a whole separate project. Total cost for this project (less the auger rental and fasteners) was about $750. All the material is available at Lowe’s, Home Depot and Amazon

where smaller rolls of wire fencing start at around $24.