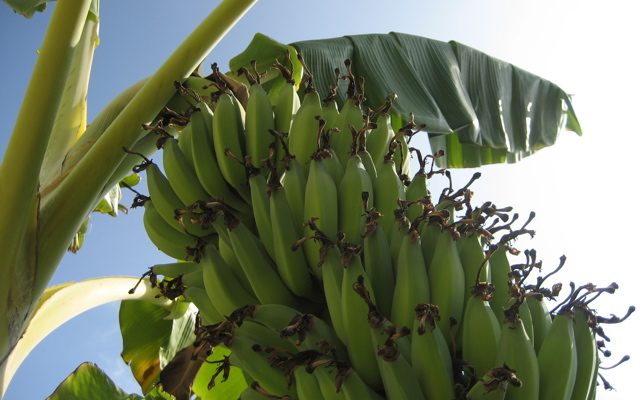 Growing banana trees, like growing sugarcane, is normally a task left to those in the tropics. But at HomeFixated, we’re not really about being normal. A few years ago I decided buying bananas at the store was over-rated and embarked on a virtual and real-world journey to learn whatever I could about how to grow bananas. . . in San Diego. Granted, San Diego isn’t exactly Minnesota, but it’s also not tropical. But I didn’t let that stop me.

First, lets cover some basics. Bananas are yummy. Well, actually “dessert” bananas are yummy. They’re the kind you’re accustomed to eating, and are generally eaten when they are yellow and ripe. Plantains are best eaten cooked, which is generally done when the fruit is still green. Both versions are tasty, however I prefer to grow “dessert” varieties. Oh, and there are also ornamental trees, which blossom a very nice flower, but don’t produce edible fruit. India is the biggest producer of bananas globally.

Now, lets cover the esoteric. It turns out bananas are radioactive. Straight from Wikipedia:

Bananas are naturally slightly radioactive, more so than most other fruits, because of their high potassium content, and the small amounts of the isotope potassium-40 found in naturally occurring potassium. Proponents of nuclear power sometimes refer to the banana equivalent dose of radiation to support their arguments. Banana shipments often set off the radiation monitors installed at US ports to detect illegal shipments of radiologic materials.

Um, I feel slightly less excited about this now. Apparently I find radioactivity yummy. Maybe the one medical doctor that reads HomeFixated can chime in about relative levels of radiation in fruit in the comments. In the meantime, I’m going to stick with the notion that bananas are safe and desirable to eat. 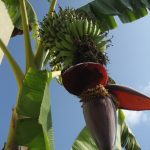 Also in the esoteric category, bananas are actually very large herbs. If you cut through their “trunk”, you’ll find it actually is all just tightly wrapped stems of the leaves. This gives a whole new vibe to “growing herb.” Another random factoid: Banana Hearts (the large Hershey’s Kiss-shaped end below where the bananas grow), is supposedly edible and tastes similar to artichoke. I think that’s the plant equivalent of “it tastes like chicken.” I haven’t tried it yet.

Many people I talk to are shocked to realize that the bananas we buy here in the US are typically a single variety known as Cavendish. While you might assume Cavendish is what we buy because it’s the best, it’s actually what’s available because of its shelf life and ability to weather extended travel time after being picked unripe. It turns out there are many varieties of bananas that are much tastier, they just don’t export as profitably. As long as you’re in a place temperate enough to grow them, you don’t need to worry about how robust they are for travel, or shelf life. Another little known fact is that banana trees die after they fruit. But don’t worry, they also produce offspring called pups to carry-on. Need more banana facts? Check out the California Rare Fruit Growers (you’re a member, right?) Banana Fact Page.

Alright, enough random facts, let’s get into how to grow bananas. Back when I began my journey, I kept finding references to a man named Jon Verdick here in San Diego. He lives just about 6 miles inland from downtown San Diego, and it turns out, he’s really serious about bananas! Jon runs Encanto Farms Nursery, which not only is home to one of the most impressive collections of banana trees, but also happens to be run from his home/suburban jungle. Banana trees are available at about $15-$35 each.  If you’re in Southern California and are serious about growing bananas, I highly recommend you schedule a visit with Jon (by appointment only).  Jon also has some shipping options available if you’re outside the area.

Almost everything I learned about how to grow bananas came from Jon.  That’s why I’m quoting a huge portion of the info sheet he graciously provided to me back in 2006. He has a more updated version of it, available here as well. Here are some key points:

Most bananas are propagated from rhizomes, called pups. Ornamental varieties are propagated from seed, as were the wild ancestors of modern bananas. Pups can be removed from the parent plant and replanted to produce additional fruit and plants. Pups are also removed to maintain a good balance between the number of plants, and the root mass available. Pups are removed by using a digging tool to sever the connection to the parent corm, and to wiggle and pry it out of the ground.

Bananas are shallow rooted, and will adapt to most soils, as long as they receive the correspondingly appropriate amounts of water. I have planted directly in my clay and cobble, and also in huge beds of pure compost, and they have been fine either way.

Bananas supposedly like a temperature range of 55-90°, and grow most actively in this temperature range. . The “Reds” are generally more cold sensitive than other varieties. Orinocco and California Gold are thought to be the most cold hardy. Plants are very frost sensitive.

From April to October, when growth is active, bananas need plenty of water, fertilizer and compost. From November to March, when growth is minimal, keep bananas moist, and do not fertilize. Excess water during dormancy causes the roots to rot.

I have deliberately tried to over-fertilize my bananas, with out success. Some will grow too fast, and their leaves will become tangled as the exit they stalk, but none have died or been “burned”. Supposedly they like a N-P-K formula of 9-3-27, but I have not been able to distinguish performance between that formula and 16-16-16 (the cheap stuff at Home Depot), I add about 12” of compost (in two or three applications) on the root area of my plants each year (a 6-12’ diameter).

To maximize plant energy, fruit size and quantity, do not remove any portion of the plant, which is green. Only remove yellow or brown portions of leaves and stems.

Bananas bloom “when they feel like it”. However, given similar growing conditions, they will generally flower at the same height, so being familiar with the characteristics of your particular variety is important. If blooming is close to occurring late in the Fall, it may be delayed till growth resumes in the Spring, but not always, here in San Diego. The first groups of flowers are female and produce fruit (varying from 3 or 4 hands, to 20 or more). A few flowers, which are hermaphroditic, and may produce very small vestigial bananas, follow these and finally the rest of the flowers are male (and like most males, don’t do anything). There is no consistent opinion on whether the male portion of the flower should be removed. I allow about 8-12” of bare stem, and then remove the terminal bud. My thinking is that energy going into flowering isn’t going into fruiting. 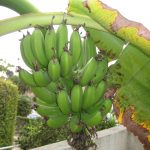 Knowing when to pick your bananas is also dependent on knowing the characteristics of your particular variety. Kanderian ripened in 12 weeks, and Saba took about 10 months. I approach a new variety as follows: when the first hand appears, I write the date on the side of the stalk with a felt pen. After 6 months, if they have not shown any color change, I cut off the top (oldest) hand, and allow it to ripen (usually a couple weeks). If it is OK, I continue removing hands as I need them. Eventually the rest will ripen on the “tree”. Picking when green spreads out the harvest (who wants to try and eat 100 bananas in a week?). There are other factors which indicate when ripening is close. Most varieties will increase in diameter, and the “corners” will become rounder. In some varieties, this is almost imperceptible. In others, it is quite dramatic, with the bananas nearly doubling in diameter.

Jon has much of this info available along with many photos on the growing tips portion of his WeBeBananas site.

If you are not blessed with a warm place to live, a guy named Joe Real put together a list of cold-hardy banana varieties after spending $2000 on 85 culivars of bananas and then leaving them outside for the winter. His list represents the twenty four plants that survived the cold after his wife evicted him (and his bananas apparently) from the third car garage. I personally think his wife should be brought to justice with 61 counts of banana tree murder.

Growing banana trees isn’t for everyone, but if you’re in a climate that’s warm enough, it can be a lot of fun. Thanks to the prolific way they propagate and the high speed at which they grow, it’s also very easy to quickly fill a landscape with banana trees. Just between you and me, I still buy bananas regularly at the store (our yard isn’t quite big enough to support continuous harvest). But when we do have a tree with mature bananas on it, they taste that much sweeter. We hope our how to grow bananas guide helps you experience your own home-grown herbs too!