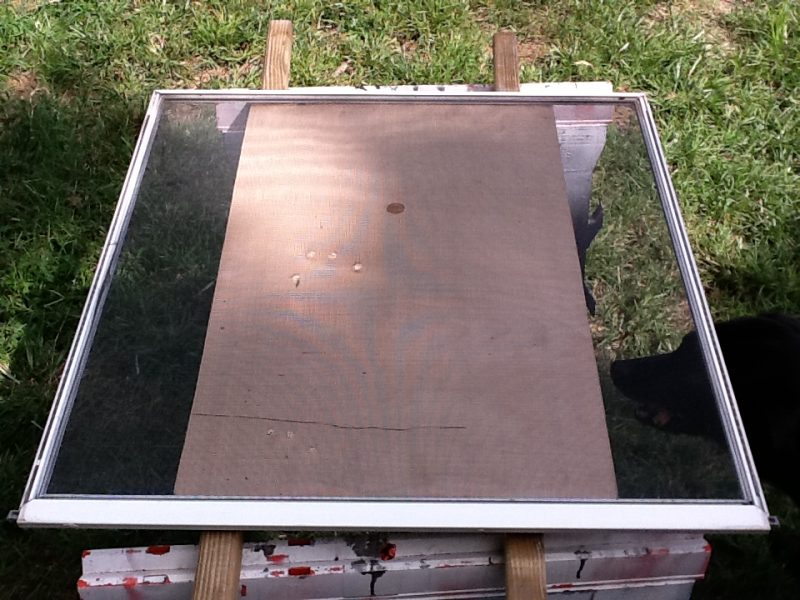 How many of you out there have let your screen go? I’m sure most of us have a small hole here or there. Like closets, our screen windows are usually the last thing we think about. What makes it worse, as least for me, is that we often think ‘Oh well it’s just a little hole’ and let it go until it’s big enough the feral neighborhood cats can pass through it like it’s a cat diner. To make matters even worse, my black lab goes a little nuts when cats or people walk by and he’s managed to knock several screens out with his enthusiasm. So with a little nudging from my wife, I went ahead and replaced the screens on all the front windows and the screen door. Yep, it had gotten that bad.

What You’ll Need for Your Window Screen Repair Project

How To Install Window Screen

Step 2: Remove the old spline. If you are unsure what spline is, look around the outside edge of the screen. The spline is the the little rubber rope that holds the screen in place. At this point you have two options. You can do the prudent thing and use new spline. Or, you can be a cheap miser like me and save the old stuff for re-use. If you are contemplating using the old spline, check to make sure that it isn’t too cracked or UV damaged. Since the whole point of window screen repair is to get some additional life out of the new screen, we recommend new spline, despite what you may see here.

Step 3: Lay the new screen over the window and cut it. You should cut the screen so that there is about an inch around each side. I generally only worry about cutting the spool and wait to cut it all to length at the end of the rescreening process.

Step 4: Pick a corner, any corner, and push one end of the spline into the corner. Using your spline tool, (and trust me life is a lot easier with this four dollar tool), roll the screen back into the groove. It’s pretty easy going until you reach the corner.

Step 7: Work it baby, work it!!! Work that screen and spline into around the edge of the screen. Make sure you are pulling the screen taught as you work it all in.

Step 8: When you get to the end of the groove use your knife to cut any excess spline and push the very end into the groove. Don’t be a knucklehead and accidentally cut the screen when you cut the spline, otherwise you’ll be back at square one. Also, if you are using the original spline you theoretically shouldn’t have any left over. However, thanks to your diligent stretching, it can be pretty easy to reduce the spline diameter and wind up with leftover. Like we suggested before, stepping up and buying new material is advisable.

Step 9: Using your utility knife, cut the excess screen off just on the outside of the screen groove. You may want to slip something thin behind the screen to protect the frame from your blade as you but, but that depends on how particular you are. Double check that everything is nicely in place, and voila, you’ve got yourself a screen that is oddly capable of keeping bugs outside (and is more dog resistant too).

It really can only take about 10 minutes to do each screen, and you can then enjoy a nice open-windowed porch in peace. One last closing thought. Screen material will affect your outcome, so plan accordingly. Aluminum wire screen is much more resistant to damage during installation while the fiberglass is lighter and easier to manipulate. However, you’ll need to keep in mind aluminum screens are thicker in diameter than fiberglass. As you install your screen pay close attention. Two of the screens I recently installed had the same thick aluminum and all I had was fiberglass screen in the garage. Everything went without a hitch, until about three minutes later. That’s when my son wanted to look out the window. He reached his hand toward the window and his whole hand went outside and he almost did as well. The cause: the two different types of material. The new screen was thinner and therefore the spline was not able to hold the new screen in properly allowing it to pop out easily, which necessitated buying a thicker spline. Regardless of these hiccups, the project itself is short and relatively easy in most cases, just make sure you pay attention to those pesky minor details. So, if you’re looking to spruce up the place a little, start with this simple how to install window screen tutorial and you too can keep insects, feral cats and maybe even dogs at bay!