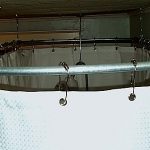 Before I start, I need to preface this entire article with two key statements that wholly describe me. First, I am incredibly lazy. Second only to the first, I am incredibly cheap. With that said here is an inexpensive way to make you own round shower curtain for a claw foot tub or stand-alone tub. I know what you’re thinking “What kind of redneck job is this”, but it turned out ok, so relax.

Step 1: Convince your significant other that you can do it and it won’t fall in and kill someone in while they are in the bath. While this may seem to be a minor point it is by far the most critical.

Step 2: Measure the diameter, length and width of the tub. You may want to use a string line or a soft tape measure to get an accurate measurement. Once you get the measurements add a couple of inches to maximize the room you’ll have in the shower.

Step 3: Mark a template for your curves. I recommend a large piece of cardboard such as an old pizza box, but… use whatever you have handy. 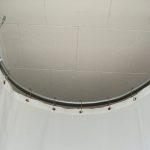 Step 4: If your tub is like ours, one end is an easy 180° curve that matches the width of the tub and the other end has two harder 90° curves. If you have two easy curves you’re in luck. Because you have two 10’ pieces of conduit getting the exact measurements on the easy curve isn’t too difficult. Leave about a foot of excess and bend the soft curve first using your marked pizza box, I mean precision template, as a guide. Slowly work the curve checking frequently with your template. Be sure to not over-bend the curve because it is darn hard to try to un-bend the pipe. Work the curve until you are satisfied that it is close to the template and measure the width (it is fairly easy to bend the width in or out). Also check to see how flat the conduit is and make adjustments as needed. Leave any excess conduit on for the time being.

Step 5: Repeat step 4 to create the opposite end of the shower curtain. Like I said my tub had a double 90° end that I used my template to recreate. If your tub has a double 90° take your time bending the 90°. I used a soft tape to measure the start of the curve to the end of the curve and marked this on the conduit to give myself a reference point.

Step 6: Lay the conduit pieces opposite of each other so that the one foot ends match up with the excess. Adjust these pieces until you’ve reached the desired length of the shower curtain. Mark the intersections with a sharpie. Note: At this point you should realize that the ends should meet up and be your desired width as well. If you need to adjust it now is the time. If you did not realize this stop what you are doing right now!

Step 7: Cut the conduit at the marks and connect them together using the couplings.

Step 8: Find the ceiling joists above the tub and using a plumb-bob mark four points where the joists fall near the curves of the tub. If they don’t run properly do the necessary cursing and then consider nailing up some blocking between joists to ensure you’re bolting into something solid. A tempting shortcut might be to use butterfly bolts or heavy drywall anchors (the overall weight with wet shower curtains is around 20+ lbs) but you definitely run the risk of the weight pulling through your ceiling . . . especially if someone slips in the shower and grabs the curtain for support. I don’t recommend using the curtain as a safety device, but you never know, the bathroom is the most dangerous room in the house!

Step 9: Drill a hole for the eye screws and run them into the ceiling until you get to the eyes to ensure that they bite well into the joists. 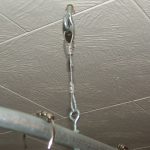 Step 11: Cut 4 lengths of cable twice as long as the distance you want the curtain rod to hang from. Loop the cable through the eye bolts and clamp them down or use the ferrules.

Step 12: Here’s where you need a friend, preferably one you are comfortable with since you’re going to get all snuggily in the tub with them. Have them hold the curtain rod up while you fish the cable through the eye screws in the ceiling and clamp them down. Use a level to make sure that the rod is even across both its length and width. You don’t want this to look like something that came out of the hicks now do you? Clip any excess cable off.

Notes: Don’t be so cheap that you don’t get stainless steel hardware to prevent rust. Also you may want to paint the conduit with spray paint designed for metal, because my wife hates the unfinished look.

If this sounds completely ridiculous then you’re probably not as cheap as I am. Go out and spend the 100 or 150 bucks and save yourself the serious headaches that this will no doubt bring.