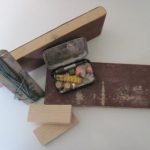 The motley crew of items in the picture on the left probably seems more disjointed and in need of rehab than the circa 80’s actual Motley Crüe.  Not true intrepid DIYers.  It is in fact my very own collection of shop throw-aways that instead of heading for the landfill–ended up making me “Dr. Feelgood”.  (Too much Crüe?  Yes–agreed, let’s move on).

Of course the economy has had an effect on the construction trades/home markets–which is why as DIYers we need to be constantly vigilant and on the lookout for ways to cut costs, outsource our kids and pets, and of course:  reduce, reuse, and recycle.

Think Globally, Act Locally: Another catchphrase from the recycling gurus that can resound loudly in your own shop.   In my finish bag I keep at least four different grits of old belt sander belts.  They aren’t so good on the actual tool anymore–but with a rip cut, and a cross cut you too can make your very own sanding block.  Depending on the size of your sander, I cut the blocks to fit the belts fairly tight–but no so much than I can’t rotate the belt on the block when I’ve sanded enough to wear the grit down.  The same can be said for the “throw-away” sticky palm sander pads.  Not good enough for the machine–but there is grit enough to apply to a small block, or even toss in the pile of older sandpaper and used by hand.  (For the velcro crew:  A little dab of Gorilla Glue in some key places, and you’ve got yourself a sanding block.)

Being Green is Sexy: In the course of human contractor events, it becomes inevitable that your string line will be snapped, stepped on, captured by pirates, or just plain destroyed.  For some reason this always irritated me.  So, I saved string.   Taking a small piece of thin plywood, I cut a little notch to seat the string, and drilled a small hole to tie it off.  Sure those plastic whirly-gigs are cool–but buying one every time they inevitably break isn’t exactly bringing sexy back.  And let’s be honest.  Are you really going to put that thing into the recycling?  What bin would it even go into?  I’m confident as long as I have string and a little plywood–I’ll always have a good string line.

Save our Wood: Ok, I made that one up.  But you know those little cut-offs you always end up having at the end of a project?  A lot of that can be saved from the junk pile and converted into handy time saving devices.  In the picture, you can see the two little blocks that look like they aren’t much but two little blocks.  That is where you are wrong.  In a lot of home remodels I worked on, one of the things a lot of homeowners were insistent about was replacing the doors.  A lot of times new floors/carpeting also went into these projects.   I have my mentor and mystical Wood Ninja Wayne to thank for this one.  Instead of measuring each allowance for each door–why not mill a couple of blocks to the exact height we wanted?  Those blocks are a 5/8” height dynamo of efficiency and awesomeness.  Reason being–the flooring guys wanted a 5/8” allowance for their material, and the door jambs were going in before the flooring.  I have five sets of these varying in dimension.  That is ten blocks of wood that otherwise would have gone to waste.  (Before you call the show “Hoarders”–no.  I will not get rid of this stuff.  I need it.)

It is easy being Green: The little tin in the picture I just threw in there as my own effort to show how Captain Planet I can really be.  It’s a mint tin.  I kept it in my bags and kept a spare drill bit, spare pair of earplugs, my stair dogs, and extra drill bits.  Nothing special about it at all–except it was small, fit in my bags, and could hold a lot of little things so I didn’t have to tear apart the job trailer for something as simple as some ear plugs.  Just another example of how something we would normally overlook and throw away can become something useful.