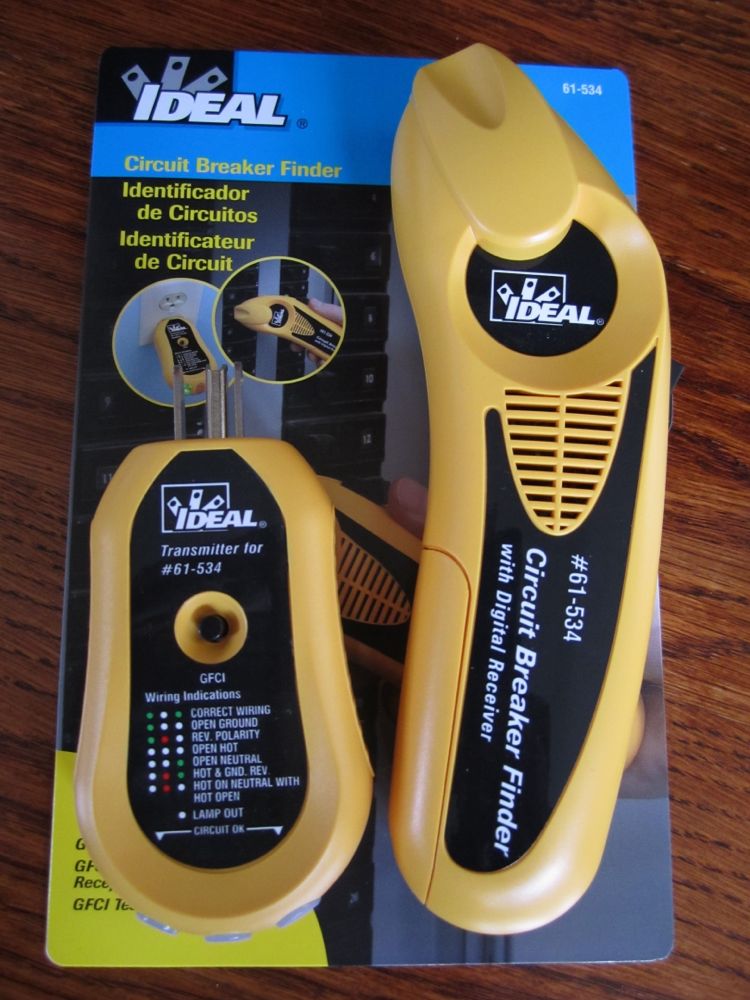 Bad wiring. It’s something just about every homeowner discovers somewhere at some point. In our case, I found a multitude of wiring issues. Please tell me who thinks it’s a good idea to fill a ceiling box with live wires and newspaper before plastering over it? Or create a junction of wires without a junction box, inside a wall cavity? It’s like they were trying to burn the house down! To make a long story short, the combination of dubious wiring jobs and a vintage home has meant a lot of electrical projects around the casa. After several dozen too many trips to the circuit breaker box, I contacted Ideal to see if they had a solution for locating circuits. They sent out their Automatic Circuit Identifier, model #61-534, which we promptly put to work to ease the chore of locating specific circuits.

The Problem
When it comes to our homes, and despite efficiency improvements, we’re more and more reliant on electricity. At any given time computers, clocks, appliances, home automation, security, pumps and other important devices and infrastructure are sucking electricity to continue doing their jobs. Let’s take the example of needing to replace a faulty electrical outlet. Unless you have a small number of clearly labeled circuits, it can be very difficult to know what circuit your outlet is on. Since abruptly shutting off the power to all circuits can damage computers or other sensitive electronics, you then need to run around your house powering down and unplugging those components. Then you can either shut off all power to your house (possibly including critical appliances), or you can do the trial and error method of plugging in a radio and flipping circuits breakers until it’s silent. Been there, done that. All in all, it’s a time-consuming, tedious, inefficient process.

The Ideal Solution
Thankfully, Ideal has the solution to your circuit-finding-woes with their suitably-named Circuit Breaker Finder. The Ideal #61-534 uses a transmitter that plugs right into your standard wall outlet. You can also use it to find an incandescent lamp circuit by purchasing a screw-in socket adapter to plug the transmitter into. The Circuit Breaker Finder operates on 120/240VAC circuits. Once you plug in the transmitter, tracing it to a specific circuit is a quick and painless process (assuming you don’t lick your fingers and touch anything electrical). Although I discovered a few isolated reports of false-positives in online reviews, I found the tool to be completely reliable when I followed Ideal’s instructions. I suspect some of the reviews that had inaccuracies were from people that skipped over the instructions, which are simple but include some important information. 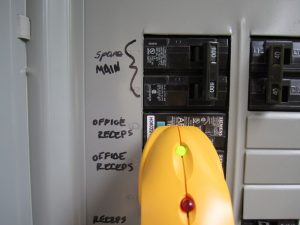 
But wait! There’s more! Not only can this tool hunt down a specific circuit, but the receiver also functions as a non-contact voltage sensor for 80-300VAC. I consider a non-contact voltage sensor an essential safety tool for any electrical work. It’s not uncommon to think power is off to a particular set of wires, only to discover another circuit might have a hot wire in the same box you’re working in. Unlike a crazy electrician I know who thinks a brief, controlled shock is comparable to a morning coffee, I prefer to avoid electrocution at all costs. Having the receiver for the circuit breaker finder is a handy way to double or triple check there is no juice going to whatever wires you’re working with. Plus, the tool functions a bit like a Geiger Counter, with beeping occurring faster as you get closer to the live wire. Who knew finding electricity could be so fun?

Receptacle Wiring Indicator
But wait! There’s even more! The transmitter for Ideal’s Circuit Breaker Finder also serves as a GFCI tester and wiring fault indicator. Although it’s not intended as a comprehensive diagnostic test instrument, the wiring indicator provides a lot of useful information for determining if your outlet is properly wired, and if not, what wiring issue is likely the source of the problem. Not only can you identify circuits now, but you can also make sure the outlets on those circuits are likely to be properly wired. If you do find a problem, you can fool the electrician you call into thinking you know what you’re talking about. “Uh, I think the hot and ground are reversed” or “We might be looking at a open neutral situation here.” Of course, if you know your way around electrical work, you’ll have a likely diagnosis to point you in the right direction.


It’s clear Ideal put a lot of effort into the design and functionality of the Circuit Breaker Finder. Details like having the receiver auto-power-off after ten minutes make for a more user-friendly tool. One detail I didn’t particularly like was the screwed-shut battery access, which leads to the single 9 volt battery in the receiver. I should probably be used to this by now, since every kid’s toy has about fifty tiny screws to secure the batteries (presumably to keep your toddler from devouring four D cell batteries). Instead, it’s more a pet peeve. I’d prefer to see user-friendly battery access that is secure but doesn’t require a screwdriver. On the plus side (get it?), Ideal wisely included a low battery detection feature. After the receiver does its self-test, if the voltage has dropped below 7.3 volts, it will beep three times and then turn itself off. When it comes to working around electricity, this is more than a convenience, it is also a safety feature. The Circuit Breaker Finder also seamlessly transitions from voltage sensor mode to circuit identifier mode. Once in circuit identifier mode, the beeping from the tool is extremely loud. While it’s better too loud than too quiet, I found the beeping db a bit overkill, especially since the sensor indicates with the LEDs too.

Conclusion
Like any great tool, the Ideal Circuit Breaker Finder addresses a common problem and solves it simply and efficiently. Not only was I impressed with how effectively and reliably it identified specific circuits, I was also pleasantly surprised with the additional functionality packed into both the transmitter and receiver. If your breaker box is labeled anything like mine is (with about 8 circuits labeled “general outlets”), this Ideal product is an indispensable tool that will save you countless hours hunting down specific circuits.

for a little over $60 on Amazon, where it’s currently favorably reviewed with almost five stars. The #61-534 even comes with a 9v battery so you’re ready to roll right out of the packaging. Happy circuit hunting!