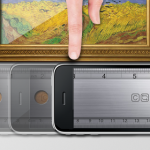 Mentioned by both CNN and Tribune Media as a top app from 2009 is the iHandy Carpenter App. In the palm of your hand, it delivers:

– A plumb bob, the easiest way for you to verify the verticality of lines or walls
– A surface level, the best tool to level any flat surface
– A bubble level bar, exactly as you can see in carpenter tool kit shops, and more beautiful!
– A steel protractor, measuring angles from 0 to 180 degrees.
– A steel ruler, supporting both inches and centimeters. By swiping it left and right, the ruler is capable to measure things much longer than your iPhone!
– Once calibrated, the plumb bob, surface level and level bar can also be used as an inclinometer/clinometer by reading the angles on the screen.

One of the cooler aspects of this phone is that you can move it along to measure a space far longer than the phone itself – the ruler scrolls as long as the phone is in motion. Mind you, you probably wouldn’t want to measure a room with it, but it’s certainly handy in a pinch.

The iHandy Carpenter is available from iTunes for a whopping $1.99.