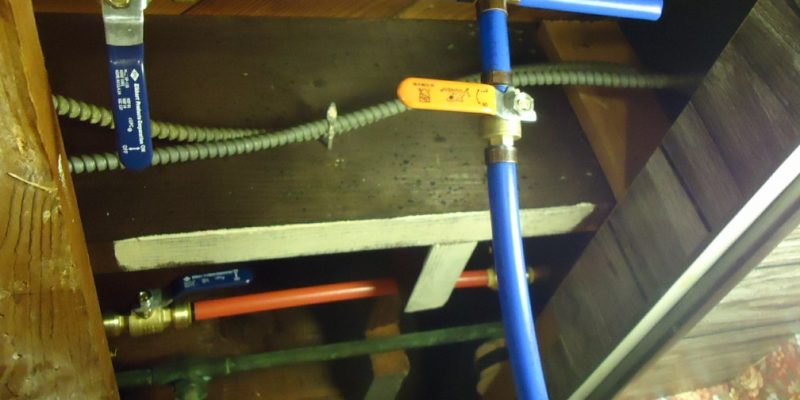 I’m no plumber. So, when my dad asked me to hook up their toilet and sink in their cabin, I said “sure, it’s easy to be a plumber.” After all, you only need to know two things – hot water valves go on the left and poop flows downhill, right?! But when you’re using PEX, it’s even easier than that, or so I thought.

What the Heck is PEX?


Why it’s cross-linked, high density polyethylene, that’s what it is. PEX stands for peroxide Engel cross linking. But enough with the technical mumbo-jumbo. While not of the same chemical basis, it’s pretty much a very flexible and resilient version of PVC piping. PEX’s flexibility results in plumbing runs with fewer connections, which in theory makes for a job less prone to leaks and other issues. It also makes installation a lot easier than its more rigid copper sibling.

My parents have an unfinished cabin they’ve been working on for what seems like an eternity. It’s kind of tough to drive from Florida to North Carolina and bring your tools, materials and everything else you need to camp out, so you can see why it’s been such a long endeavor. The exterior shell is finished, the roof is on and all of the rough electric and plumbing is in place, so it’s getting close to being done. As of right now, there’s a toilet, shower and sink in place, but it’s not hooked up to anything. That’s where I come into the scene – Mr. Amateur Plumber. Keep the “ameteur” in mind when you’re reading this article.

I was pleased to see that all of the water supply pipes were PEX. This not only made my job easier, but it scored some serious brownie points with my parents once I got everything hooked up. The only issue that I ran into was the cost of the supplies. What a shock when I found out that the simple PEX connection clamping tool was a $50 item.

Here’s another kick in the butt, when I found out that I also needed a specialty cutting tool that was around $50, I laughed and put that back on the shelf. I have a hand saw that would cut through that stuff like butter. Or, so I thought. I wish I would have bought it to save myself the headache of cutting it by hand. If I had to describe the cutting process (which I do by the way), it was a lot like trying to cut a wet noodle with a banana. This stuff is so flexible I had to really get a good grip on the material to make the cut. That meant I needed to get my hand a little closer than I would have liked to the hand saw.

PEX TIP #1: Be sure you get a cutting tool as well as a PEX clamping tool, or you’re going to have a difficult time making a good, clean cut.

PEX Tip #2: Don’t put the cart before the horse. Try not to forget to put the compression ring onto the PEX first!

This part of the process seemed pretty weird to me. How does that little ring hold back 200 psi of pressurized water? It just seemed like it wasn’t going to work and I was really skeptical, but I thought I’d give it a whirl. The tip of the compression tool fits snugly onto the edge of the compression ring’s teat. Once that’s in place, you just squeeze the handles and it’s all done. Or, so I thought (again).

Trying to hold the ring, the tool and exert an enormous amount of pressure on the fitting is a trick I have yet to master. I ended up using a little tape to hold the ring in place while I squeezed the handles with enough force to crush walnuts with my bare hands.

PEX Tip #3: Having someone hold the compression ring or using a little tape helps make the job go a little more smoothly!

All in all, it was pretty easy once I worked out all of the kinks. Water flows without a leak and the toilet flushes like a champ. Yay PEX!