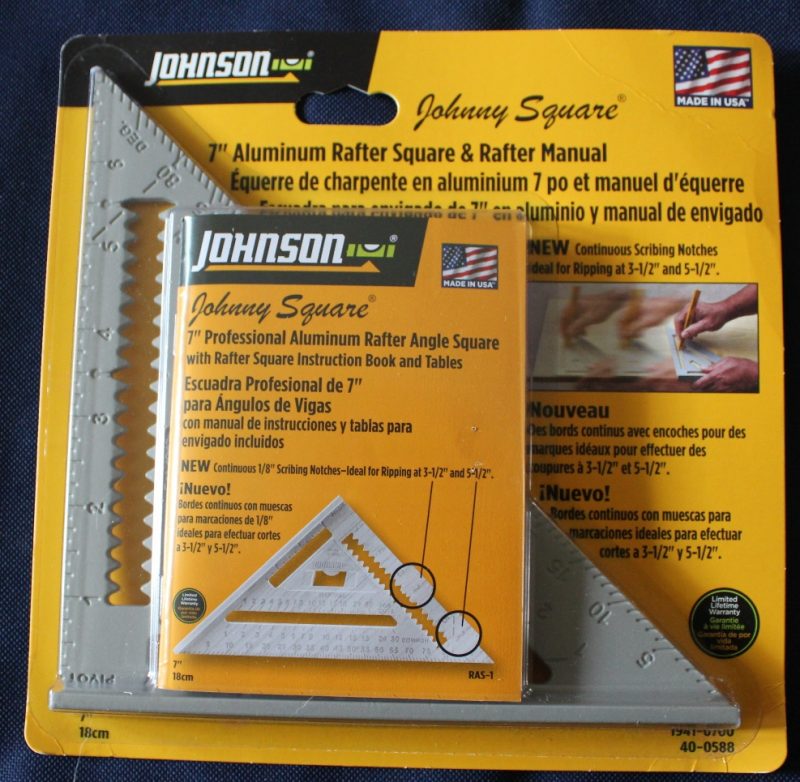 Got rafters to install? Or joists, or studs? A lot of builders use trusses for their roofs, even on otherwise stick-built homes; they’re strong, they go in quickly, and they eliminate waste. There are still a LOT of stick-built roofs, though, especially on custom homes, and on every job site, stick-built or not, I guarantee you pretty much every carpenter there will have a speed square. They’re cheap, sturdy, maintenance-free, have no batteries to charge, and are one of the most useful tools you can own. I’ll tell you what you can do with YOUR speed square after the review. (I didn’t mean that the way it sounds…)

At first glance, the Johnny Square 7” speed square from Johnson Level is almost identical to my other two 7” aluminum squares. It has, per Johnson’s specs, a solid aluminum body, with CNC-machined edges for accuracy and durability, and permanent graduations and numbers on a low-glare, protective powder coated finish for easy reading. There are, however, a couple of new angles the folks at Johnson thought of that put this square a notch above the competition.

The first notch above is…a notch. Rather, it’s a series of notches cut out of the inside that allow you to easily scribe a straight line at any ¼” increment from 1” to 5 ½”. Just set the foot of the square along the edge of the board, insert your pencil into the notch of your choosing, and slide it along the board for a quick and easy parallel line. They advertise this feature as 1/8” scribing notches, but they sure seemed to be spaced ¼” apart on MY square. My guess is that either the machinist that set up the spacing, or the copywriter who described the features, spent a little too much time testing out the special unadvertised feature…more on that later. (EDITOR’S NOTE: Johnson Square informed us this has been corrected on the current packaging and manuals).

Another feature I really like, which is also found on some other brands, is the pivot point notched out of the 90º corner of the square. This is designed to help find an angle, but here’s a bonus application for you: Need to draw a circle? Haven’t seen your protractor in a while? No problem—just drive a finish nail into the center of your desired hole location, hold a pencil in one of the notches or along the face of the square, and pivot it around the nail for a quick and easy circle.

And so on to the special unadvertised feature: the hidden bottle opener (for off-the-job use ONLY, naturally). After a long day of computing lengths and angles for hip and valley rafters, your poor overworked brain needs to be soothed and rehydrated, and this thoughtful feature can assist by providing a convenient way to liberate the contents of whatever beverage you choose to quaff, be it Yoo-Hoo or something containing a bit more hops and/or malt. I performed rigorous testing on this particular feature, for the enlightenment of the HomeFixated community, and I’m happy to report it works as unadvertised.

When it comes down to it, there are many brands of speed squares out there, and they all do pretty much the same thing. Johnson Level’s Johnny Square is the latest entrant to the field. It’s well made, comes with a handy reference pamphlet to help you compute common angles for rafters, spacing for stair stringers, and the like, and it’s made in the U.S.A, which we really like. It comes with a lifetime warranty, and you can get it from Home Depot for $8. 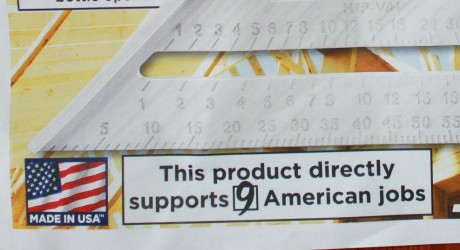 So What the Heck do you DO with it?

Probably the most common use of the speed square is to mark perpendicular lines on dimensional lumber, either for cutting or layout of studs, rafters, joists, and so forth. Just hold the lipped heel of the square against the edge of the board, position the edge of the square where you want your mark, and you can quickly draw a line at a perfect right angle to your piece. It also works great if you need a 45º angle, as the long edge is at a perfect 45º from the other two sides.

Another common use of this sturdy tool is as a saw guide for cross cuts. Grab the square, press the lip against the edge of the board (I like to hold it against the outer edge, so I can pull it toward me as I push the saw through the cut), and the shoe of the saw will ride nicely along the thick flat edge of the square, giving you a perfect 90º cut.

As I mentioned in the review, another handy feature is the row of notches for scribing lines. Need to trim the edge off a piece of plywood, or rip a board down to 2 ½”? Piece of cake; lay the heel of the square on the edge of the board, hold your pencil in the notch at that position, and slide it along. Got a couple of boards to attach at a 90º angle? Just hold the square inside the two, or along the top edges, to align them perfectly while you screw or nail ‘em together.

Then there’s the use it was originally invented for—laying out rafters. The long, diagonal edge of the square (which is actually a triangle, as you may have noticed by now), has markings from 0-90º in one-degree increments, to allow you to easily find and mark any angle. Most also have scales for hips and valleys, and the pamphlet included with most squares shows how to calculate rise and run for rafters, angles and placement for bird’s-mouth notches and rafter tails, rise and run for stair layout, and other uses that will make your brain hurt until you’ve done it a couple of times. If you don’t have a pamphlet, there are a bunch of sites online, including this one from Swanson, that can help you with your diabolical calculations.

So if you don’t already have a speed square—er, sorry, Swanson attorneys—a RAFTER SQUARE—go get one and make your mark. And use the special, unadvertised feature wisely. 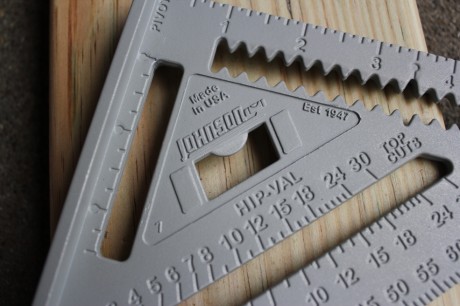