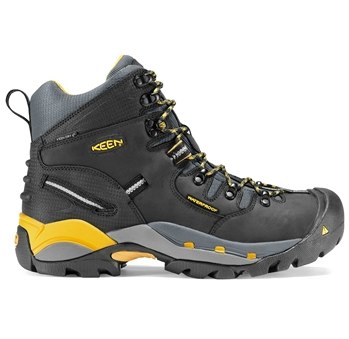 If you are ever sporting new steel toe boots, do not make the mistake I did. Keen sent over their Pittsburgh work boots, and I naively pointed out the steel toe feature to my four year old daughter. She then laughed maniacally after stomping on my toes relentlessly. That was was all fine. In fact, it was the first test for these Keen’s. I can now testify that the Keen Pittsburgh boots will protect your toes from wild, toe-stomping children. The problem came the next day when I was wearing some non-steel toe Keens. Thinking all Keens must surely have steel toes, my daughter decided to stomp on my un-armored feet. It turns out that’s surprisingly painful. So, if you have foot-stomping children around, I advise you to either wear your steel-toe Keens 24/7, or just have a little conversation about the difference between steel toe boots and conventional footwear. Read on for more details about the Keen Pittsburgh work boots, a public revelation about my anatomy, abusive hammer testing, and scintillating boot style commentary.

Soft Tongues
It’s not often I publicly extol the virtues of soft tongues, but I’m going to do that now. Of course I’m referring to the tongues you find on your work boots. No, no. . . not from someone licking your boots, but the tongues that protect your foot and lower shin from the laces. I personally hate putting on boots that have overly-rigid tongues. Who wants to feel like they are putting on ski boots when going to work? Rigid tongues tend to slide around and often wind up on the side of your shin rather than staying in place. I am happy to report Keen likes soft tongues too. The tongue on the Pittsburgh has enough padding to protect you, but is also soft enough to stay comfortably in place. It does not get bound up in between the laces and has close to zero risk of pinching you. We give soft tongues in general and the Keen Pittsburgh soft tongues in particular a big thumbs up.

Style with Originality
A while back we reviewed the Timberland Pro Helix work boot. The style on the Pro Helix is definitely more traditional. It’s not a boot that will get you any snarky comments from your fellow workers. The Keen Pittsburgh on the other hand, isn’t afraid to step out of the traditional brown and black, toned-down leather look. Aside from industrial-looking black and grey, Keen added some yellow accents to the Pittsburgh. Given the heavy-duty appearance of these boots, I don’t think you’ll get any comments like “What’s up with the banana shoes?” or “Dude, I think a lemon exploded on your boots” or “Watch out! There’s a little bit of sunshine coming out of your heel!” If these kind of comments strike terror into your heart, you may need to opt for some “normal” boots. But if you’re confident enough to follow your own style whims, I think the Pittsburgh is a cool, rugged and semi-industrial looking boot. Actually, if you’re sold on the Pittsburgh, but not on black and yellow, it is also available in more traditional slate black / grey or bison (brown) / red.


Before we get off the style topic, it’s important we discuss shoelaces. Out here in Southern California, style is a little less “straight-laced” than other parts of the country. Keen decided to give you, the work boot wearer, full control over how mild or wild your shoelace options are. They included two pairs of laces: one pair is black (cue snoring sounds), the other is black with a splash of yellow (party time)! I tried them both, and as much as I like black, it was just a little too tame for my taste. I personally opted for the more wild black and yellow laces. If you’re feeling indecisive, you can always do one of each. When was the last time you bought footwear and the maker included more product than absolutely necessary? Kudos to Keen for tossing in a spare pair of laces. . . it’s a sign of how seriously they take making their customers happy.


There wasn’t much I disliked about the Keen Pittsburgh boots, however I did find fault with a small portion of their lacing hardware. Lacing boots can be a bit of a pain. Lacing often involves an awkward crouched position and that tricky finger dance of trying to keep proper pressure on the laces as you progress with tying. Call me picky, but I like to lace my boots without having to look at or pay close attention to what I’m doing. Unfortunately, with the Keen Pittsburgh boots, that’s not something that’s easy to do. The top two lace hooks are so close together that I would frequently snag both of them with the lace, rather than catch them one at a time. This made lacing something that required some precise finger maneuvering. As a result, I would have liked to have seen the top two hooks with a little more distance between them. On the plus side, two of the lace hooks on the instep have a locking design that makes keeping lace pressure on the lower boot a breeze.


Keen is already known for keeping your toes safe with a rubber toe box that keeps your little piggies safe from stubbing. I’m going to share a little secret here; I have long toes. One friend of mine goes so far as to refer to them as “freakishly long.” Since my toes are like having a second pair of hands, I take toe protection seriously. In fact, Keen’s toe protection is what first sold me on an awesome pair of Newport sandals I’ve been known to use in non-OSHA-endorsed fashion. With the Pittsburgh’s Steel Toe, Keen is taking their toe protection to a whole new level. While we don’t recommend beating your toes with a three pound hammer, I did. My freakishly long toes survived unscathed. Between the trademark molded rubber toe and left and right asymmetrical steel toe, your piggies have likely never been safer.

Visibility
While we are talking safety, we should mention the reflective webbing on the Pittsburgh boots. While it’s not exactly like wearing a giant reflective safety vest, we found the reflective portions of the boots to be pretty eye-catching when hit with light at night. Since getting run over or run into at work is a drag, we think the reflective webbing is nice attention to detail when it comes to safety. It looks pretty cool too. The reflective material on the lower portion of the boot also serves to help suck your foot firmly into the heel portion. It’s safety meeting functionality.


This is one pair of features I didn’t feel I adequately tested. On the waterproof front, San Diego just doesn’t lend itself to ample testing environments. The good news is, according to Keen these boots are waterproof. We hear that’s handy in places where it rains, or if your work regularly has you crossing streams. Keen also touts the breathability of these boots. I like to wear pretty thick socks with work boots, and those thick socks tend to make for hot, sweaty feet. I honestly couldn’t note any perceivable difference between the Keen Pittsburghs and more conventionally-designed all leather work boots, but your mileage may vary. 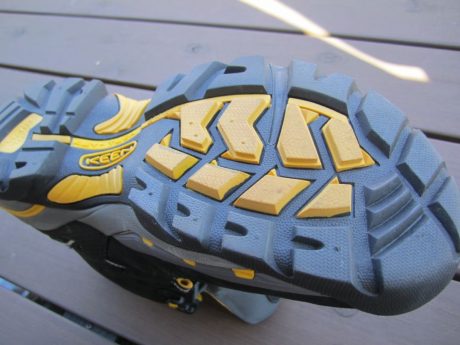 Traction for Action
No one likes slipping with regular footwear. On the job site, the difference between good traction and bad traction can be the difference that prevents injury or even death. Keen’s “Grip” technology features oil and slip resistant outsoles that meet or exceed ASTM (American Society for Testing and Materials) F1677-96 MARK II non-slip testing standards. We haven’t read up on F1677-96 MARK II standards lately, but we’re pretty sure they mean these boots are slip resistant. I found the Pittsburgh boots to be grippy and surefooted on a variety of surfaces, but we didn’t test in wet or oily environments.

Membership Has Its Privileges (If you’re Men’s Size 10)
Sometimes companies get a little excited about sending us products to review. In Keen’s case, they accidentally sent us two pairs of the Keen Pittsburgh Steel Toe work boots. We offered to ship them back, but Keen thought we could figure out another use for them. So we thought we should share the Keen love and get them into the hands of a worthy HomeFixated weekly newsletter subscriber. The only problem is, we don’t track the shoe size of our email subscribers. That’s why this week we’ll be doing a special giveaway to one lucky size 10 HomeFixated subscriber. Make sure you’re a subscriber and just send an email this week to marc (at) homefixated dot com and in five sentences or less, tell us why you should win these random size 10 Keen boots. We’ll select one lucky winner by the end of the week and will announce the winner in the comments below as soon as they’re confirmed (you must be 18 and reside in the continental US to be eligible). We will then ship out the boots after the winner is selected! Even if you’re not a size 10, you should definitely subscribe to our weekly newsletter. Aside from getting great HomeFixated content delivered right to your inbox, you’ll also get access to top-secret giveaways like this one.

Industrial footwear is an essential component of your work gear. If you’re looking for well-crafted, ultra-solid, and stylish armor for your feet, you can pick up a pair of Men’s Keen Pittsburgh

from Amazon for around $180. Toe-stompers and boring leather work boot wearers will be no match for you! Keen even backs their work boots with the ultra-confident guarantee you see here.