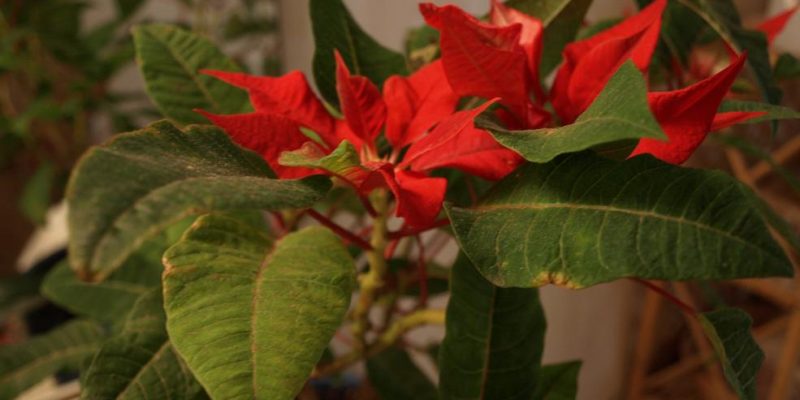 Most gardeners have a few houseplants in their lives. These could be a handful of low-care cacti that don’t mind a sunny windowsill and occasional drink of water. Or they could be a full dozen tropical plants that were evacuated from the garden to save them from the freezing cold outside. In my case, it’s usually the latter. Even so, I’ve learned some things in the process that I pass along to you (*cue evil Sith voice*) my young apprentices (mwahaha).

Let There Be Light – And Low-Light Houseplant Alternatives

God knew what he was doing when he said that. Anyone that’s not still feeling financial pain from the recent “holiday season” (Anyone? Anyone?) could get a grow light for their home or the supplies to make one. Or you might already have one that can be put to good use. I’ve even seen several different methods online for hanging small houseplants in front of exceptionally large windows so they didn’t end up light-deprived during the winter.

This seems a bit too complicated for someone like me since my current setup works just fine. I just put dressers, tables, bookshelves, shelves, and nightstands near available windows so that I don’t have to bother with grow lights. I also keep the blinds open. Most of my plants don’t have to be indoors for more than a few months and I have an entire house to spread them out in. They usually get enough sun from this process to keep them going through the winter months. However, gardeners in colder environments might not be able to manage using this step alone.

If you can’t provide decent lighting with grow lights or the available windows, you should get houseplants that are tolerant of low-light situations. I’ve had pretty good luck with dracaenas so far. They’re in a hallway that doesn’t get much natural light and a backdoor that’s only open when the weather’s warm outside. Another choice is to stick with plants that go dormant in the winter and that just have to be brought indoors to protect their roots such as lemon verbena, gingers, and mandevillas.

Nothing can go for very long periods of time without something to drink. Not you and certainly not your plants. I usually try to make sure mine get watered a moderate amount on a weekly basis. I give them more if they’re drooping. The tropical species (a large Arabian jasmine and two plumerias) get watered twice a week because they need a bit more moisture. I’d also be heartbroken if the jasmine died since we’ve been friends for years now.

Saucers help plants conserve moisture. They’re particularly useful for preventing arguments if you’ve people in your life that won’t take kindly to  water stains on the furniture or floors. You can get flimsy plastic saucers at very reasonable prices. The largest ones are usually under $2, with smaller sizes being even cheaper. Of course, you can splash out a little more for the terracotta and ceramic ones. They do look nicer and are far less likely to be destroyed by a random misstep. If you’re protecting furniture or flooring, make sure whatever variety you use provides a true water barrier (eg. doesn’t have drain holes or an unsealed surface that lets moisture through).

Houseplants tend to get stressed out when they’re first brought indoors. If they seem to be dying, you’re going to want to find out what the problem is before it’s too late. Not getting enough water or low humidity levels will cause some plants to drop a bunch of their leaves. You’ll need to keep tropical plants away from vents or space heaters to avoid drying them out. You might even want to mist them occasionally. I’ve never had to bother with that. But the humidity where I live is pretty high, both indoors and out.

Other plants that look like they’re dying could simply be going dormant for the winter. Lemon verbena in particular ends up looking like sticks every year after it’s brought indoors but will come back as long as the roots stay warm. However, a horrible looking plant that has access to all the essentials (heat, light, and water) could easily be suffering from a bug attack. I’ve personally had more problems with spider mites than I care to count.

I even left my beloved key lime tree outside longer than I should in hopes of freezing the bugs off. According to my research, the spider mites love dry air. That usually isn’t a problem where I live. But a space heater that’s going full blast tends to suck out the natural moisture in the air. I’ve had better luck keeping them bug-free in the dog shed, which has a heater but one that’s on a lower setting since my dogs obviously can’t take off their fur coats. Sprays are an option too, as long as you aren’t allergic to chemicals and use ones that are labeled as being safe for indoors.

Sometimes houseplants do just die for no apparent reason. Maybe you bought an orchid that was on sale only to later realize it couldn’t recover. Or perhaps your belated outdoor to indoor evacuation caused some unfortunate deaths. It happens to everyone. Take heart. And maybe buy some hardier plants next time? It’s a thought. In any case, best of luck and happy gardening in 2017!