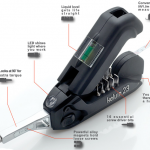 Now and again, I like to take a break from intellectual programming like Jersey Shore and Bridalplasty and watch a show called Dragon’s Den. The show features a group of investors who are pitched new products and services by budding entrepreneurs and inventors. It’s up to the “dragons” if they want to buy into the companies, allowing the products and services to hopefully expand into a more mainstream market. Somehow I doubt my idea of donut-flavored coffee would fly on the show.

What did, however, get the dragon’s interest and cash, is an all-in-one tool called the Kelvin 23. This compact, hand-held gadget has 23 features and is now available for Canadian and US buyers. Here’s the scoop!

Off the bat, yes, I’ll admit, it’s a bit like a Leatherman that some of you are already aware of. It has the Swiss Army Knife feel to it that we’ve come to like about multi-tools. However, I think the Kelvin 23 has a few design aspects going for it that make it stand out. Plus, it’s not so “knifey”. Here’s what you get:

It’s not the sort of thing you’ll build a deck with or use to renovate a kitchen, but it’s perfect for little jobs around the house like assembling Ikea furniture, installing cover plates and fixtures, hanging pictures and curtain rods – typical “honey do list” stuff we like to procrastinate on. You can do all this without having to haul out the ol’ toolbox. Here’s a better look at it:

The Kelvin 23, the “urban super-tool”, is available in select stores and online for $29.99 with free shipping to Canada and the US. You can also find the kelvin 23

at Amazon for $31, where it currently has a single one-star review from a bitter sounding reviewer.