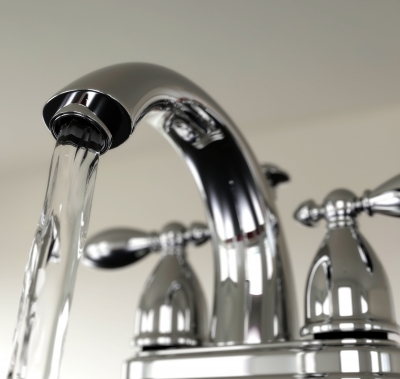 Two typical reasons the kitchen faucet is dripping are because you have loose nuts or washers that went bad (feel free to make your own jokes here). That is as long as it’s a compression faucet. In that case, the fix is pretty simple. Unless you forget to turn off the water. If you do forget, expect to re-enact one of the many painful scenes in Kevin Costner’s Waterworld. The main difference being you probably won’t be chased around your home by a sadistic Dennis Hopper on a jet ski. This article covers the basics of kitchen faucet repair to help guide you in your attempts to silence that pesky leaking kitchen faucet, hopefully without any drama.

Identify the Faucet
Which kind of faucet do you have? The four kinds of faucets are: disk, compression, ball, and cartridge. The ball, disc and cartridge faucets are “washerless.” They don’t use neoprene or rubber washers. The compression model is just your basic washer-faucet. It does have a washer inside, which is usually the culprit when it comes to leaks and drips.

Turn-off the Water Before You Kick Off Your Kitchen Faucet Repair
As we already alluded to, this step is pretty important. The shut-off valve is normally found right under the sink. In some cases, it might be hiding inside a floor cabinet. After you close the valve, turn on the faucet. In theory, nothing should come out. Sometimes the valves/angle stops go bad though, in which case you’ll need to replace those AFTER turning off the main water supply that feeds the valve you’ll be replacing. You want to be positive the water is definitely off whatever you’re working on, lest you become a character in some screwball comedy or a bad aquatic movie.

Ball-type Faucets
Ball-type faucets are pretty complicated. They use a lot of different parts which makes them a type of brain-surgery project. Best bet: Just purchase a replacement kit. If it’s an older faucet, you may have to take a more expensive route and replace the whole fixture.

Disc-type Faucets
These are the modern, single lever faucets. They employ a pair of ceramic discs that slide across each other to handle not just the water’s temperature, but also its flow rate. If a disc-type is leaking, one of the seals is damaged. Find the set-screw. Loosen it just enough to take off the handle. Under the removed arm is the escutcheon cap. Take that off, placing it aside. Unscrew the mounting screws and pull-out the cylinder. The neoprene seals could be worn. Or it could be as simple as there’s a little sand under their collar. Either way, clean them or replace them and put everything back together. Still leaking? You may need to replace the cylinder. Same process as the above, only now you’re taking out the old and dropping in the new. See, kitchen faucet repair isn’t that bad, right?

Cartridge Faucets
Remove the decorative cap on the handle, take out the handle screw, push the handle back and pull it off. You might run into a threaded retaining clip that keeps the cartridge in place. Get out the needle-nosed pliers to extract it. Pull the cartridge up-and-out. Expose the spout of your leaky faucet. Chop-off the old O-rings, coat the new O-rings with plumber’s grease and put the thing back together. It only costs about $15 to replace the entire cartridge. Match the new one with the old. See, you’re becoming a kitchen faucet repair pro!

A Compression Faucet Fix
Grab a handful of different sized washers, a screwdriver that will work with the existing screw and an adjustable wrench. Alternatively, you can match the exact washer size if you’re willing to put in a store run in the middle of your kitchen faucet repair. If you have any Teflon tape, bring it along to help with the merger of the packing nut and what lies below. Before you dive into replacing stuff, let’s try the easy fix. With your wrench, tighten the packing nut. Turn the water back on. Has the dripping stopped dropping? You’re done! That was easy. Of course, it’s almost never that easy. Turn-off the water, again. Rotate the packing nut, this time, counter-clockwise. Extract the entire valve unit. Twist and turn it until it breaks free. Replacing the Washer: We’re scrutinizing the valve unit when we notice the old washer, looking all haggard. There’s a screw holding the scraggly, soon-to-be, ex-washer in place. Remove the screw that’s holding the bad washer and replace it with the new washer. When everything is copacetic – the new washer is in its place – rescrew the screw. It’s time to put everything back together. Make sure when you replant the valve, it is pointed in the same direction it was before you started messing around. Tighten up the packing nut and you should be good to go!

Dripping faucets can use a lot of water for no purpose other than annoying you with clock-like sounding drops. Unrepaired, it’s not only noisy, it’s costing you money, and could make any of your tree-hugging friends angry. The fix you perform will pay for itself in the long run.