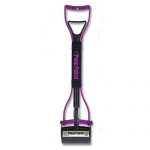 Spring is in the air, and with it, that familiar smell: The emergence of all the gross things once hidden by the snow. Even if your city has by-laws that require dog owners to pick up their pets’ droppings, winter is a special wonderland for bad dog walkers – rather than baggying the brown, they’ve kicked some snow over the area the dog was, thus hiding a special surprise on your lawn. How grand.

Alternatively, you might have a backyard that you’ve been letting your own family dog rule over the winter months. Maybe it was the chill or the call of bad reality TV, but in any case, it’s been a few months since you went back there and cleaned up what is now a literal wasteland.

Also known as you – but with a pooper scooper that makes the unpleasant task quicker and easier to call done. The Lazy Pet Poop Patrol Jaw Scoop is quite poopular … sorry … popular … among dog owners. At 27″ in length, you don’t have to do much bending down. The handle allows you to squeeze the poop scooping jaws open to snatch the offender and releases to close the jaws and capture. No sweeping! No weeping! Just stink defeating!

Did we mention this pooper scooper is good for animals large and small? We bet the Lazy Pet Poop Patrol Jaw Scoop would have come in handy at many a Canadian bar and street during the Olympics when the US tied the gold medal game in the third period.

Before you let the spring stink set in, consider getting a Lazy Pet Poop Patrol Jaw Scoop